A Collection of Spirals 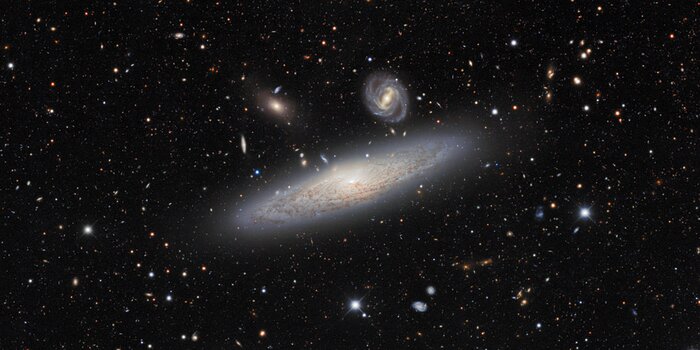 At the center of this image is NGC 1515, an intermediate barred spiral galaxy that is part of the Dorado Group. Large-scale observations of the Universe have found that galaxies “clump” together. These clumps are held together by a loose gravitational pull and designated a group or cluster, depending on the number of galaxies within a bounded radius. One of the characteristics of groups of galaxies is the slow speed of individual galaxies, about 150 km/s (93 mi/hr), which results in frequent interactions between members. The Dorado Group is composed of three subgroups and NGC 1515 is a member of the subgroup associated with the galaxy NGC 1566. In the background of this image are thousands of other galaxies, located even further away than NGC 1515, alongside stars located in our own Milky Way.

A wider crop is available here. Try the zoomable version to explore the thousands of background galaxies.