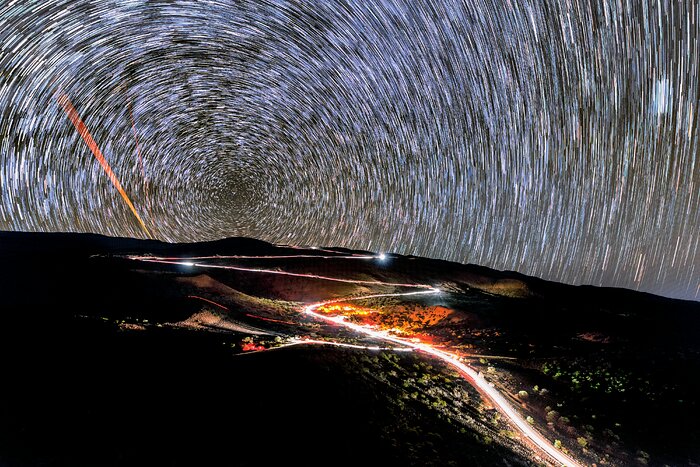 For a photo taken at night, this image appears to be ablaze with light. The winding road, which leads to Gemini North, one half of the international Gemini Observatory, a Program of NSF’s NOIRLab, looks like a bright white ribbon. However, this abundance of artificial light is an illusion. In reality, enormous effort is made to keep artificial light in the area around the telescopes to a bare minimum. This mitigates interference by light sources from Earth with astronomical observations.

The road appears so bright because the photo was taken with a long exposure time. This is evident by the long trails swept out by the stars, caused by the rotation of the Earth. This is also discernible by the orange band on the left, caused by the movement of a laser guide star (LGS) coming from a telescope at the summit of Maunakea. These LGS systems track how atmospheric turbulence distorts light as it reaches the Earth so that these changes can be accounted for in telescope observations. As the long exposure captured the apparent movement of the stars and laser guide star, the light from the road accumulated, resulting in a seemingly glowing road!