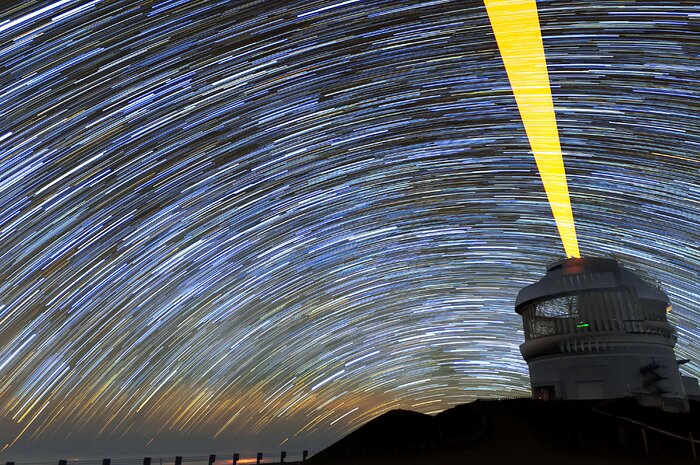 This photo might make you feel a little giddy, as though the sky is swirling around you. Gemini North — one of the two telescopes that make up the international Gemini Observatory, a Program of NSF’s NOIRLab — almost looks like a lighthouse, beaming bright light into a starry whirlpool. The effect, however, is not due to a single dynamic moment, but to the photographer’s using a long exposure to capture the apparent movement of the stars across the night sky.

The term “apparent movement” is appropriate, because of course the stars are not really sweeping across space in a uniform movement. Rather, the Earth’s rotation makes it appear that they do. The beam of light being emitted by Gemini North is also, in reality, not nearly so broad. It is actually an extremely narrow beam of light known as a laser guide star. The telescope uses the laser guide star to assess how much atmospheric turbulence is distorting the light which reaches the Earth from objects in space.