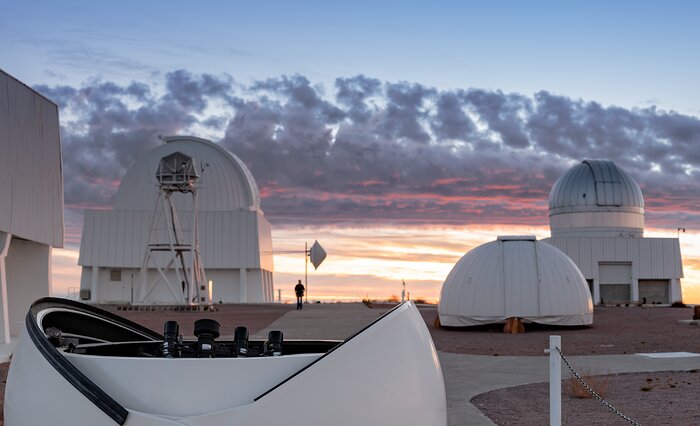 A rare richly colored sunset sky is the backdrop to this image of Cerro Tololo Inter-American Observatory (CTIO), a Program of NSF’s NOIRLab. While clouds can make for a spectacular sunset, water vapor in the atmosphere also impacts astronomical observations by absorbing starlight. Astronomers and engineers have developed a suite of instruments to measure its impacts. One such instrument is housed in the small clamshell dome in the foreground of this image: the aTmCam (Atmospheric Transmission Monitoring Camera) is a new calibration system that lets astronomers measure how much light is passing through the atmosphere.

aTmCam isn’t the only instrument designed to measure the atmosphere at CTIO. The tall metal frame with a canvas dome in the background at the left belongs to the DIMM2 Seeing Monitor. This automatic instrument helps astronomers measure “seeing” — how affected the astronomical observations are by the blurring effects of turbulence in the atmosphere.