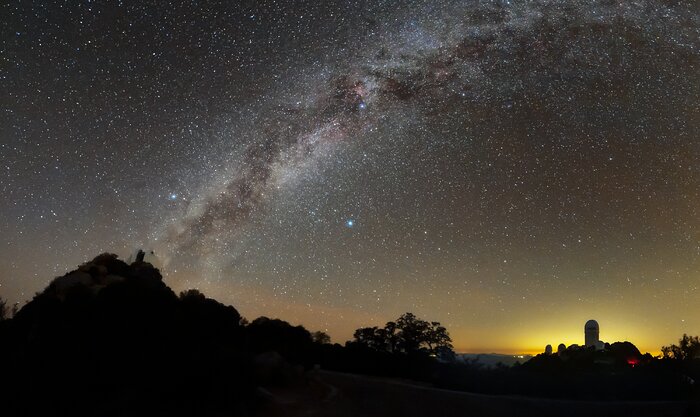 The Milky Way arches above a desert skyline in this image from Kitt Peak National Observatory (KPNO), a Program of NSF’s NOIRLab. The domes of the telescopes jut into the night sky, silhouetted by airglow and lights from the city of Tucson, 80 kilometers (50 miles) away. Only a solitary red light disturbs the darkness on Kitt Peak itself.

This image shows a particularly striking view of the dust lanes threading through the Milky Way in the skies above the observatory. These dark bands of dust obscure our view of the Galactic Center at optical wavelengths, leaving astronomers dependent on observations from gamma-ray, x-ray, infrared, and radio telescopes. Kitt Peak National Observatory plays host to two radio telescopes and over twenty optical telescopes. The collection of optical telescopes still has plenty of work to do: astronomers use KPNO to study objects ranging from exoplanets to distant galaxies.