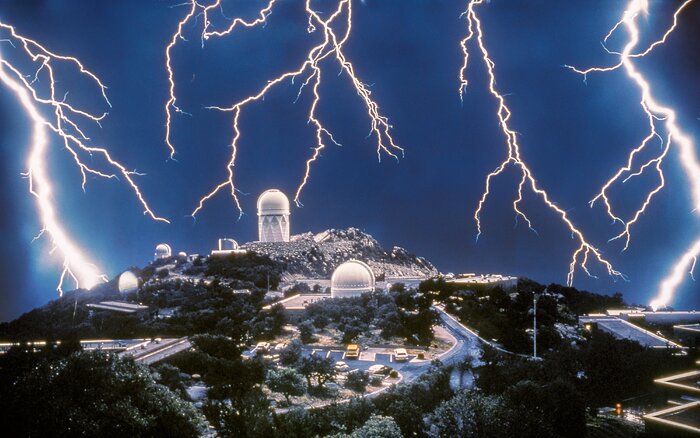 The skies over Kitt Peak National Observatory (KPNO), a Program of NSF’s NOIRLab, are typically clear and calm, perfect for high quality astronomical observations. On 4 June 1972, however, the night sky was torn apart by a violent summer storm. Luck was not with any astronomers who had hoped to observe that night — but it was with Gary Ladd, an amateur photographer who decided to challenge his photography skills.

Ladd was a technical assistant at Kitt Peak, but he happened to have that night off. When the storm rolled in, he walked up to the building that houses the 84-inch telescope (nowadays known as the KPNO 2.1-meter Telescope), and started taking photos. After narrowly escaping lightning strikes, he moved inside the building and took photos out of a window. He had no idea how to correctly approach shooting lightning, and as this was long before the invention of digital cameras, he could not check if his attempts were working. Later on, he sent the film off to be developed. He flipped through the photos — and the rest is history. Despite going on to become a full-time professional photographer, this stunning image of lightning dancing around Kitt Peak remains his most iconic photograph. It is still breathtaking almost 50 years later.