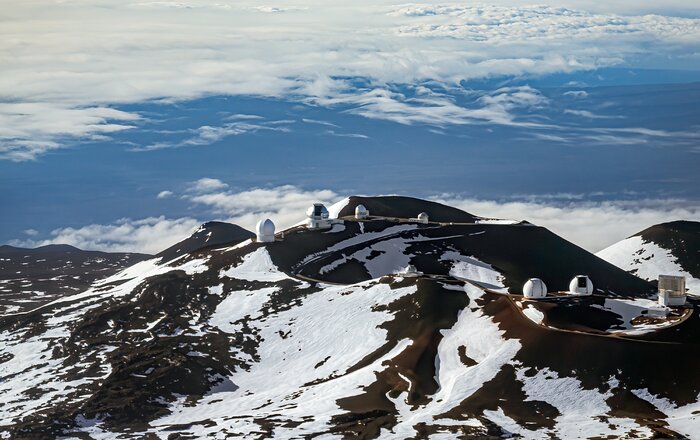 This aerial view of the summit area of Maunakea showcases one of the best sites in the world for ground-based astronomy. Against a backdrop of snow and dark volcanic rock, the domes of the Maunakea Observatories harbor some of the world’s most advanced astronomical equipment. These telescopes, including the 8.1-meter Gemini North (the open silver dome on the higher ridge), utilize the high elevation, dark skies, and good weather to observe the Universe in astounding clarity. Despite the occasional snowfall, the air at the summit of Maunakea is extremely dry, making the site perfect for infrared observations — as well as stunning photographs like this one! Gemini North is one of the pair of telescopes that make up the international Gemini Observatory, a Program of NSF’s NOIRLab.

This photo was taken during an overflight of Maunakea on 28 March 2015 during a collaboration with the W.M. Keck Observatory to test and calibrate the Transponder-Based Aircraft Detector (TBAD) system installed at each telescope. This is why the Gemini North and Keck domes are open even though it is daytime. The purpose of the TBAD system is to protect aircraft from accidental illumination when the laser guide star adaptive optics system is operating.