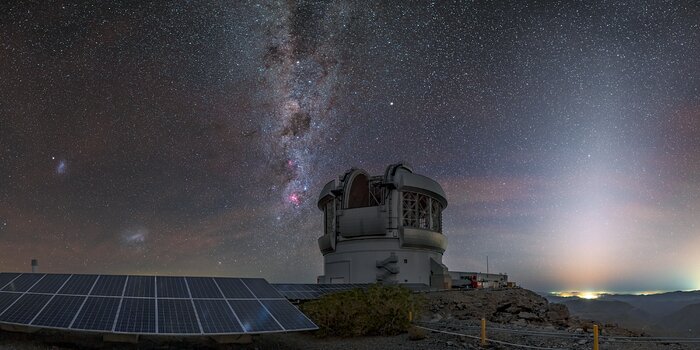 This image of the Gemini South telescope is so full of light that it is difficult to believe that it was captured at night. Gemini South is the southern half of the international Gemini Observatory, a Program of NSF’s NOIRLab. The wedge-shaped light on the right side of the photo is not from an artificial source (although there are city lights below it), but is a natural phenomenon known as zodiacal light. This occurs when sunlight is scattered off dust particles in the plane of our Solar System, causing part of the sky to become illuminated either after Sun-down or before Sun-up. The zodiac itself is a belt-shaped region on the sky, as seen from Earth, and is the apparent path of the planets in the sky. Gemini Observatory is named after one section of the zodiacal belt: Gemini, the constellation of the Twins.