Heart of the Milky Way 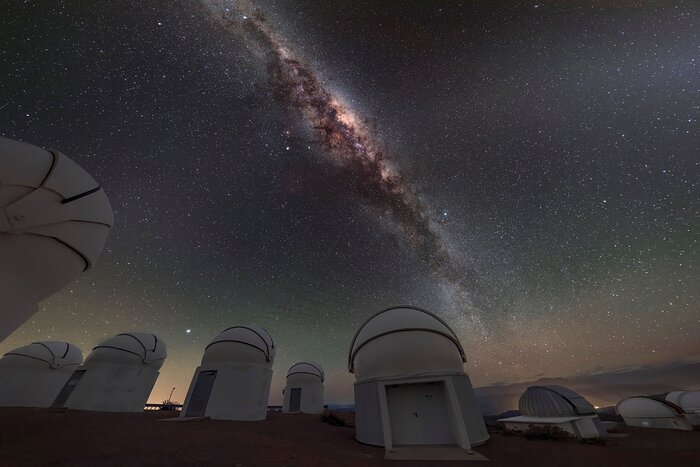 In this time-exposure photo, the center of the Milky Way glows in various colors — an effect invisible to oneʻs eyes — above the Cerro Tololo Inter-American Observatory (CTIO), a program of NSF’s NOIRLab. The heart of our galaxy is best viewed from the southern hemisphere and areas near the equator (such as Hawaiʻi) because of its orientation relative to the Earth. Thanks to its location in the mountains of northern Chile, CTIO makes the southern skies accessible to US astronomers. As well as hosting large research telescopes, CTIO accommodates a variety of smaller tenant observatories. The small domes populating the lower left of this image belong to PROMPT, one such tenant observatory. As the name suggests, these telescopes are built for quick observations which support time-domain astronomy — in particular observing the aftermath of gamma-ray bursts, tremendously powerful and distant explosions which can last only fractions of a second. On the right side of the image is the 1.3 meter telescope of the SMARTS consortium, and the Las Cumbres Observatory telescopes are visible.