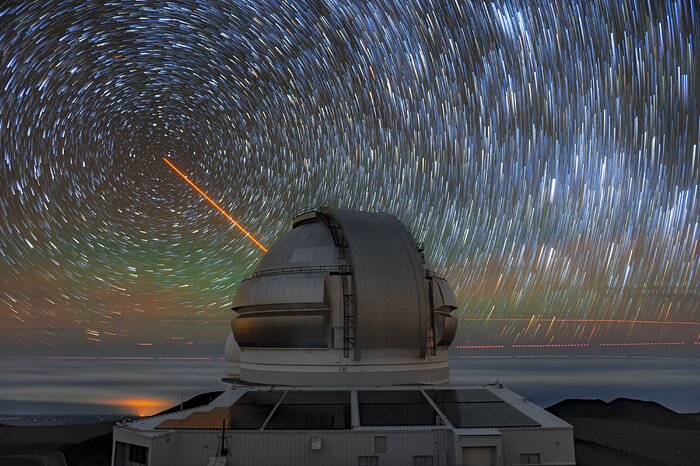 As stars appear to circle around the north celestial pole, a new laser at the Gemini North telescope on Hawaii’s Maunakea undergoes rigorous testing, as seen in this image from early October 2019.

The international Gemini Observatory, a program of the NSF's NOIRLab, recently completed testing of a new laser from the company TOPTICA which is a critical component in the telescope’s adaptive optics system. Adaptive optics utilize artificial guide stars, produced by a laser, as a reference when compensating for distortions caused by turbulence in the Earth’s atmosphere. The result is ultra-sharp images that rival the view from space.Laser commissioning activities required pointing at specific parts of the sky designed to both test and calibrate the state-of-the-art laser. This image is created from a stack of images that reveal the Earth’s rotation and the colors inherent in the images. The green glow near the horizon is due to airglow from oxygen high in the Earth’s atmosphere.

The laser is pointing in the direction of Polaris, or the North Star (Hokupa‘a in Hawaiian). NOIRLab staff Joy Pollard and Jason Chu captured a variety of timelapse images of this milestone both inside and outside of the Gemini North dome — watch for more images from Joy’s and Jason’s work in upcoming NOIRLab Images of the Week.