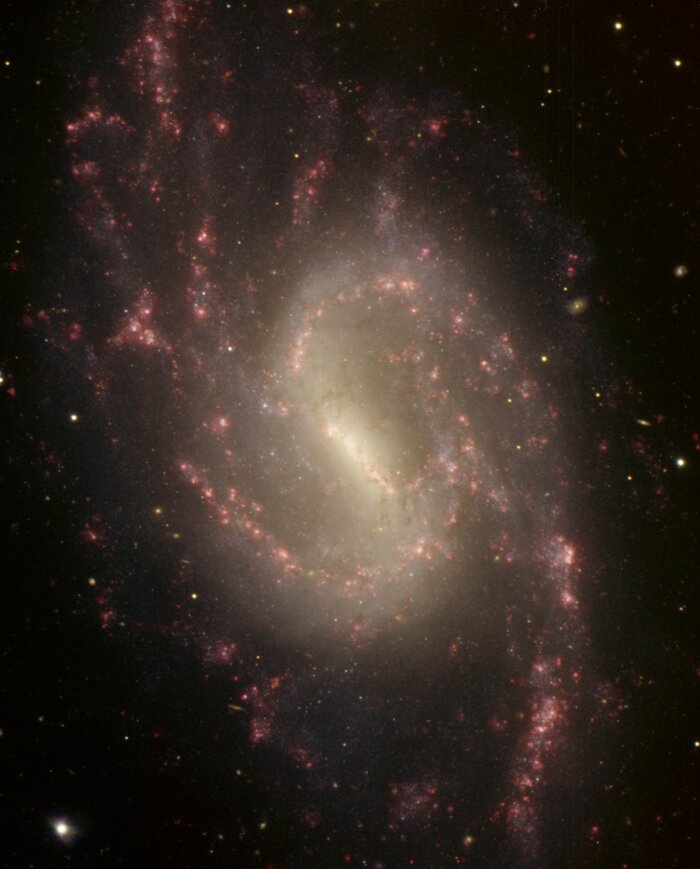 This image of NGC 3359 was obtained with the Gemini Multi-Object Spectrograph (GMOS) on the Gemini North telescope on Mauna Kea in Hawai‘i. The circular pinwheel shape with the easily recognized spiral arm structure makes it straightforward to classify this object as a spiral galaxy, however, it is the presence of the straight ‘bar’ in the center of the galaxy that distinguishes NGC 3359 from many other spirals. Recent research has shown that the central bar in this galaxy is relatively young; it is only 500 million years old (as compared to the several billion year age of the galaxy). Astronomers are still trying to understand how large features like the bar form and how long they last as a galaxy like NGC 3359 evolves. In addition to its central bar NGC 3359 is known for its many regions of star formation (so-called [H II] regions) that are visible across its disk. In this image the [H II] regions are seen as the light red patches visible throughout the image. There are approximately 100 [H II] regions in NGC 3359 which makes it an example of intense star formation. An example of an [H II] region in our own galaxy, where many tens of young stars have recently been born, is the famous Orion Nebula. The color-composite image is actually made of four individual images taken in the g (blue), r (green), i (orange) and h-alpha (red) filters. NGC 3359 is a moderately large object in the sky. The angular size of this image is 4.3 x 5.3 arcminutes. It is a relatively close example of a spiral galaxy at a distance of roughly 49 million light-years. NGC 3359 is located in the constellation Ursa Major and has an apparent magnitude of 10.5. It is easily visible in amateur-sized portable telescopes.