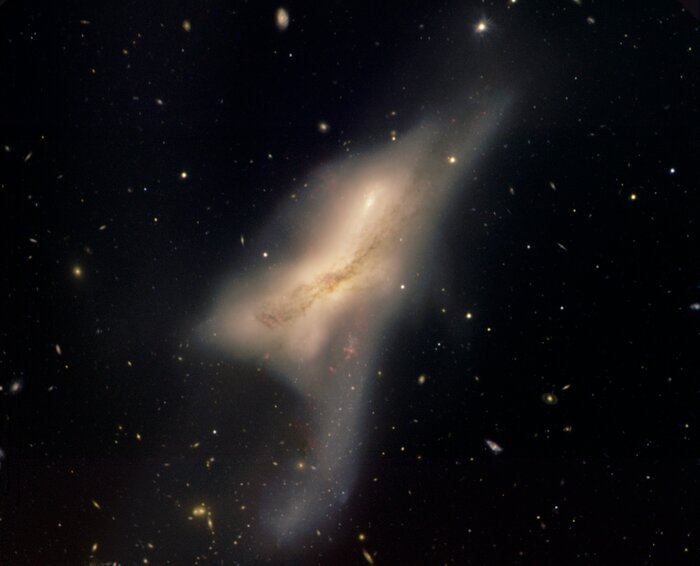 Gemini North image of interacting galaxies NGC 520. NGC 520 has a unique shape that is the result of two galaxies colliding with each other. One galaxy’s dust lane can be seen easily in the foreground and a distinct tail is visible at bottom center. These features are a result of the gravitational interactions that have robbed both of the galaxies of their original shapes. Some astronomers speculate that each member of the pair was originally similar to the Milky Way and Andromeda Galaxy. This collision could be providing us a glimpse at what might happen to our own galaxy in about five billion years as the Andromeda Galaxy collides with our Milky Way. Estimated to lie some 100 million light-years away in the direction of the constellation Pisces, these galaxies have likely changed significantly in the time it has taken for their light to reach us. This view may be fairly early in the galactic dance that these galaxies have been performing. Hints of star formation (faint red glowing areas above and beneath the middle of the image) may have become more pronounced during the course of the collision. Many background galaxies also appear in this image. They represent galaxy evolution at an even earlier epoch in the history of the universe.