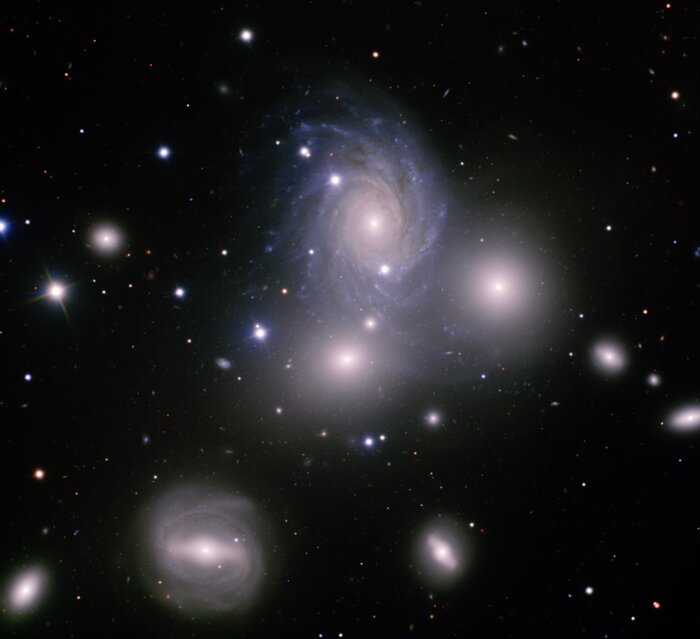 "This compelling image from the Gemini North telescope peers into the heart of VV 166, a galaxy group 300 million light years distant. It presents, at a glance, a sampling of the wide diversity of systems that populate the deep reaches of the nearby Universe. One of its most fascinating features is a striking alignment of three disparate galaxies in a near equilateral triangle: Spiral-shaped NGC 70 at top, elliptical galaxy NGC 68 to its lower right, and lenticular galaxy NGC 71 to its lower left. NGC 70’s spiral arms are dominated by extensive areas of active star formation which appear blue in this image due to the colors used to assemble this color composite. NGC 68 looks monochromatic because it’s a much older system devoid of star formation and spiral structure. NGC 71 is a lenticular galaxy with attributes of both spiral and elliptical systems. NGC 70’s spiral arms also appear distorted between NGC 68 and NGC 71, indicating a possible tidal dance with one or more of the group’s galaxies. These graceful interactions are choreographed as VV 166’s members whiz collectively through space at about 6,500 kilometers per second. Barred spiral galaxy NGC 72 lies to the triangle’s lower left. Our own Milky Way galaxy has a similar bar-like structure, but its arms are of a “grand design”— more splendid, organized, and numerous. Obtained using the Gemini Multi-Object Spectrograph (GMOS), at the Gemini North telescope located on Mauna Kea, Hawai‘i. In this image, north is up, east left, and the field of view is 5.2 x 5.2 arcminutes. Composite color image produced by Travis Rector, University of Alaska Anchorage.