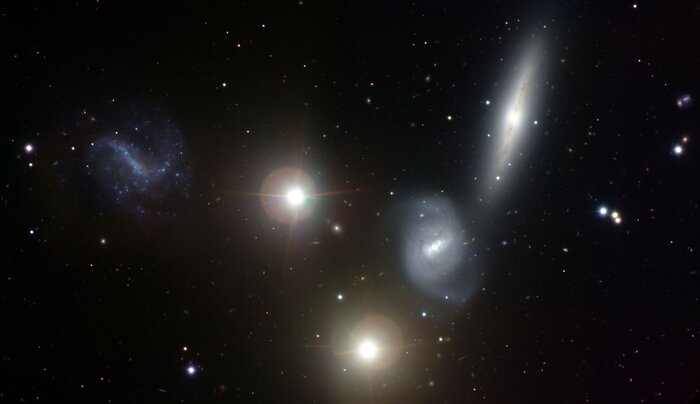 This image shows an interacting trio of galaxies known as the Lyon Group of Galaxies #455 (LGG 455). It is made up of the galaxies NGC 7232 (upper right), NGC 7233 (lower right), and NGC 7232B (left). The two brightest objects near the center of the image are foreground stars in our Milky Way. Dark lanes of dusty material can be seen in NGC 7232 and NGC 7233, while NGC 7232B shows bright spots of young, blue stars along its weak spiral arms. LGG 455 has not been studied in great detail, but it is thought to host a 'dark galaxy', a rare object that contains the raw ingredients for making stars but which hasn't been able to form any. Even though the dark galaxy in LGG 455 contains enough gas to make more than 400 million Suns, the deep image by Gemini is not able to find any significant population of stars (just to the left of the lower foreground star in this image). Most likely, that huge amount of gas was flung out of NGC 7233 when it had a close encounter with one of its two companions.

This field of galaxies was suggested by Ryan Soares for the Australian/Gemini Student Imaging Contest. The data were obtained in 2012 at the Gemini South telescope in Chile using the Gemini Multi-Object Spectrograph (GMOS) and the color composite image produced by Travis Rector, University of Alaska Anchorage.