The Starry Dandelion and the Cosmic Gecko NGC 6520 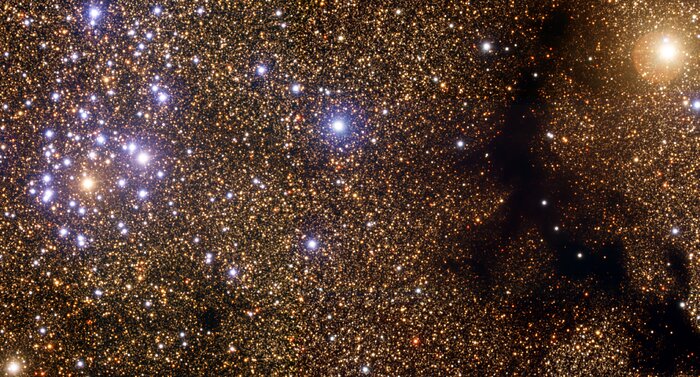 Millions of years ago, a dust cloud about 5,200 light-years from the Sun coalesced to begin the process of star birth. Today, some 190 million years later, NGC 6520 is ablaze with hot, massive young stars arrayed in a dandelion seed-shaped cluster. Not far away lies the gecko-shaped remains of what may be their birth cloud, Barnard 86. This image, taken using the Gemini Multi-Object Spectrograph on Gemini South, shows details in a 9.7- x 5.4-arcmin section of a larger, highly populated region in the Sagittarius star cloud. It provides the clearest optical view of the cluster and its nearby dark-cloud companion. The total mass of the stars in NGC 6520 is roughly equivalent to 300-400 times the mass of the Sun, while the nearby cloud contains enough material to make about 3,000 more stars like the Sun. The close proximity between the star cluster and its nearby dark-cloud companion suggests the two are related. A survey of the southern sky (released in 2001) that singled out hydrogen-alpha emissions from warm, ionized interstellar gas shows a nebula extending from the dark globule to embrace the star cluster. Caption: The star cluster NGC 6520 and the Bok Globule Barnard 86, as imaged by the Gemini South telescope, using GMOS. The image is 9.7 x 5.4 arcminutes and is rotated 17 degrees east of north. This color composite is made using the following four filters: u-band = blue; g-band = cyan; r-band = yellow; and i-band = red. The cluster, is about 200 million years old, and lies around 5,500 light-years away from the Sun, in the direction of the constellation Sagittarius. Amateur note: NGC 6520 and Barnard 86 are popular observation targets for moderate-to-large telescopes (8-14” apertures). Look for the cluster and its neighboring Bok globule are set against the starry background the Sagittarius star cloud, centering your telescope on RA 18H 03.3 m, DEC -27º 53’ for the cluster. Barnard 86 lies a few minutes to the west.