A Familiar-Looking Messenger from Another Solar System

The visit of the interstellar interloper 1I/2017 U1, recently spotted streaking through the Solar System, gives the people of Earth their first chance to study up close an object from another planetary system. In a study carried out with the WIYN telescope at Kitt Peak National Observatory and the Nordic Optical Telescope in the Canary Islands, astronomers find that despite its foreign origins, U1 is familiar in appearance — its size, rotation, and color are similar to that of asteroids in our Solar System. Its familiar appearance supports the long-held view that our Solar System once ejected its own flotilla of such messengers out into interstellar space.

It Came From Beyond…the Solar System

Discovered on 18 October 2017 as it sped away from the Sun, the interstellar interloper U1 was quickly recognized, from its hyperbolic orbit, to have originated outside the Solar System. Its fortuitous close passage to Earth, first noticed by the Pan-STARRS telescope, attracted the attention of astronomers eager to take a close look at an object formed elsewhere in the Galaxy.

In a sequence of images taken over 5 nights with the One Degree Imager on the 3.5-m WIYN telescope at Kitt Peak National Observatory and with the 2.5-m Nordic Optical Telescope on La Palma in the Canary Islands, U1 was found to be slightly red and to vary in brightness with an 8 hour period. Both properties are similar to those of asteroids in the inner Solar System.

From its changing brightness, the team inferred that U1 is highly elongated with rough dimensions 30m x 30m x 180m. About twice the height of the Statue of Liberty, the 6:1 aspect ratio of U1 is “similar to the proportions of a fire extinguisher — although U1 is not as red as that,” says David Jewitt (UCLA), the first author of the study.

“With such an elongated shape, U1 probably needs a little cohesive strength to hold it together. But that’s not really unusual,” remarked study coauthor Jayadev Rajagopal (National Optical Astronomy Observatory). Commenting on its size, rotation, and color, Rajagopal mused that, “the most remarkable thing about U1 is that, except for its shape, how familiar and physically unremarkable it is.”

Seeing Our History in a Familiar Face

The pock-marked surfaces of the inner Solar System help to verify this story. However, there has been no direct evidence to date that comets and asteroids were once ejected from the Solar System. If planets form around other stars the same way they did in the Solar System, many objects the size of U1 are predicted to be ejected in the process.

“U1 may provide the first direct evidence that planetary systems around other stars ejected objects as they formed,” concluded Rajagopal.

Are Others Out There?

Although we’ll never see U1 after it leaves the Solar System, astronomers are optimistic about opportunities to study other interstellar interlopers. With most stars now believed to harbor planetary systems, ejected bodies should be common in the Galaxy.

That perspective suggests that our Solar System may, in fact, be flooded with interstellar interlopers that pass through the Solar System undetected. The authors estimate that based on the properties of U1, there are about ten thousand U1-sized objects closer to the Sun than Neptune at any given time. “Each one whizzes through the solar system in about 10 years,” says Jewitt, “and every 10 years or so, we have a completely new bunch of these objects, a few of which we can hope to see.”

Future surveys designed to detect moving objects, such as the wide, fast, deep survey to be carried out with the Large Synoptic Survey Telescope, are likely to discover more of these interlopers, giving us further opportunities to study objects from beyond the Solar System.

Kitt Peak National Observatory is a division of the National Optical Astronomy Observatory, which is operated by the Association of Universities for Research in Astronomy Inc. under a cooperative agreement with the National Science Foundation. 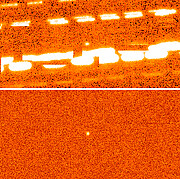