Shed Light on a Cosmological Mystery

An astonishing number of faint low surface brightness dwarf galaxies recently discovered in the Fornax cluster of galaxies may help to solve the long-standing cosmological mystery of “The Missing Satellites”. The discovery, made by an international team of astronomers led by Roberto Muñoz and Thomas Puzia of Pontificia Universidad Católica de Chile, was carried out using the Dark Energy Camera (DECam) on the 4-m Blanco telescope at Cerro Tololo Inter-American Observatory (CTIO). CTIO is operated by the National Optical Astronomy Observatory (NOAO).

The discovery, recently published in the Astrophysical Journal, comes as one of the first results from the Next Generation Fornax Survey (NGFS), a study of the central 30 square degree region of the Fornax galaxy cluster using optical imaging with DECam and near-infrared imaging with ESO’s VISTA/VIRCam. The Fornax cluster, located at a distance of 62 million light-years, is the second richest galaxy cluster within 100 million light-years after the much richer Virgo cluster.

The deep, high-quality images of the Fornax cluster core obtained with DECam were critical to the recovery of the missing dwarf galaxies. “With the combination of DECam’s huge field of view (3 square degrees) and our novel observing strategy and data reduction algorithms, we were able to detect extremely diffuse low-surface brightness galaxies,” explained Roberto Muñoz, the lead author of the study.

Because the low surface brightness dwarf galaxies are extremely diffuse, stargazers residing in one of these galaxies would see a night sky very different from that seen from Earth. The stellar density of the faint dwarf galaxies (one star per million cubic parsecs) is about a million times lower than that in the neighborhood of the Sun, or almost a billion times lower than in the bulge of the Milky Way.

As a result, “inhabitants of worlds in one of our NGFS ultra-faint dwarfs would find their sky sparsely populated with visible objects and extremely boring. They would perhaps not even realize that they live in a galaxy!” mused coauthor Thomas Puzia. 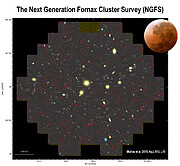