NOAO: Kepler Stars and Planets are Bigger than Previously Thought

In a new study using the NOAO Kitt Peak National Observatory Mayall 4-meter telescope, observations of a large sample of stars with candidate planets identified by the NASA Kepler Mission have revealed that many of the stars, and hence their planets, are actually somewhat larger than originally thought. In addition, the researchers confirm that planets larger than Neptune are more likely to be found orbiting stars that contain more heavy elements (such as iron) than the Sun. Small planets, however, have been discovered around stars both rich and poor in metals.

Over three years ago, Steve B. Howell (NASA Ames Research Center) put together a team to investigate and characterize the stars that the NASA Kepler Mission found to host planets. The team members are Mark Everett and David Silva (both at NOAO) and Paula Szkody (University of Washington).

“One of the main findings of this initial work,” said Everett, who leads this study, “is that our observations indicate that most of the stars we observed are slightly larger than previously thought and one quarter of them are at least 35% larger. Therefore, any planets orbiting these stars must be larger and hotter as well. By implication, these new results reduce the number of candidate Earth-size planet analogues detected by Kepler.”

The Kepler mission, a telescope in orbit around the sun, measures how much a star dims when a planet candidate crosses in front of it. The amount of dimming reveals the relative sizes of the star and its candidate planet. The research team used the amount of dimming combined with new measurements of the sizes of the stars to determine that the planet candidates are larger than previously thought.

While approximate sizes of most of the host stars were previously known from the star’s colors and brightness, spectra reveal far more. The team acquired spectra using the large, ground-based, Mayall 4-meter telescope located near Tucson, Arizona. Their observations were made over 48 nights covering the last several years.

“While Kepler is the discovery machine, it takes both Earth-based and space-based telescopes to truly understand exoplanets and how they relate to the stars they orbit,” says Silva (NOAO Director and one of the co-investigators of this study)

To date, more than 300 stars have been observed at the Mayall 4-meter from the long list identified by Kepler as hosts of potential exoplanets (referred to as Kepler Objects of Interest, or KOIs). The sample contained more faint stars, with distances ranging from 2800 to over 7000 light years, than previous ground-based studies (Fig. 1 shows the scale of these distances). Such faint KOIs host the majority of high-priority, Earth-size candidate planets identified so far by Kepler. Spectra of these stars were obtained, and compared with theoretical models, to determine more accurate stellar radii, temperatures, and metallicity (i.e., the relative amount of elements heavier than hydrogen and helium in each star). In all, these stars are thought to harbor more than 360 exoplanet candidates. To date, this study represents the largest and faintest uniform sample of spectroscopically characterized exoplanet host stars in the Kepler field of view.

The team plans to make more ground-based spectral observations as there remain over 1,000 Kepler Objects of Interest stars with small planet candidates to observe in this magnitude range.

Kitt Peak National Observatory is a division of the National Optical Astronomy Observatory, which is operated by the Association of Universities for Research in Astronomy Inc. (AURA) under a cooperative agreement with the National Science Foundation. 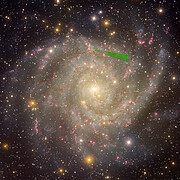