GLOBE at Night Reaches More Than 18,000 Participants on Six Continents

More than 18,000 citizen-scientists in 96 countries submitted 4,591 observations of the darkness of their local night skies during the 10-day GLOBE at Night event last month.

The GLOBE at Night Web site received data from all 50 U.S. states and from every continent except Antarctica (where the constellation used for the project was not visible!) At least 399 of the participants were under age 12, with another 949 between the ages of 12-14 years old.

“The geographic reach of the GLOBE at Night program exceeded our wildest expectations,” said Connie Walker, an astronomer and science education specialist at the National Optical Astronomy Observatory (NOAO), one of the event’s major co-sponsors.

Conducted during March 22-31, 2006, the international GLOBE at Night program was designed to help students, families, and the general public observe and record how the constellation Orion looked from different locations, as a means of measuring the brightness of the sky at a variety of urban and rural sites. The program was designed to aid teaching about the impact of artificial lighting on local environments, and the ongoing loss of a dark night sky as a natural resource for much of the world’s population.

“We fell a few hundred short of our target of 5,000 total observations, but the engagement and excitement of large family groups, and dozens of school children participating in the activity together, more than make up for a few less data points,” Walker said.

Participation was open to anyone—anywhere in the world—who could get outside and look skyward in the early evening. Observers reported their results online by comparing the number of stars they could see in Orion with a set of template images on the program’s Web site, which showed the number of stars in the constellation for a range of visibilities from bright skies to very dark.

At least 18,084 people participated in the program, according to self-reporting forms on the GLOBE at Night Web site. “This number was likely much larger, given that our form gave an option only for ‘more than 25 people’ and we’ve heard reports of individual events with 50 participants or more,” said Kirsten Meymaris, the GLOBE at Night Project Coordinator. More than 750 people have signed up to receive updates via the program’s electronic mailing list.

“Truly innovative and a real eye opener for many of my young students,” was a typical comment from one teacher who conducted the program.

Scientific analysis of the GLOBE at Night data set has begun, including cooperation with experts in analysis of worldwide satellite data related to artificial lighting. Initial results will be reported at upcoming meetings of the American Geophysical Union and the American Astronomical Society.

Preliminary mapped results can be explored individually using the GLOBE at Night Map Viewer, built with support from ESRI. A student exploration Guide for the Map Viewer and other ESRI mapping tools will be available soon at this Web page for directed investigations of the GLOBE at Night data.

“The observations made during GLOBE at Night will help students and scientists together assess how the quality of the night sky varies around the world, and how it is affected by artificial lighting and light pollution from poor lighting fixtures,” said Stephen Pompea, astronomer and manager of science education at NOAO. “Given the widespread interest in the inaugural GLOBE at Night event, we are eager to offer it again in 2007.”

For more information, see the program’s Web page or contact globeatnight@globe.gov or outreach@noao.edu. 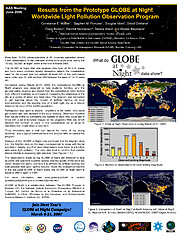