Gemini Observatory provided key observations in characterizing an object visiting from outside our solar system, ‘Oumuamua. After the object was discovered by Pan-STARRS1 on Haleakala, both Gemini telescopes dropped everything to observe ‘Oumuamua for three nights as it quickly dimmed from view. Researchers found that despite its interstellar origin, the object is similar in composition to some objects in our Solar System but its shape is unlike anything found around our Sun.

In October astronomers were surprised by a visitor that came racing into our Solar System from interstellar space. Now, researchers using the Gemini Observatory have determined that the first known object to graze our Solar System from beyond is similar to, but definitely not, your average asteroid or comet. “This thing is an oddball,” said Karen Meech of the University of Hawaii’s Institute for Astronomy who leads an international team studying this interstellar interloper.

Originally denoted A2017 U1, the body now goes by the Hawaiian name ‘Oumuamua, in part because of its discovery by Meech’s team using the Pan-STARRS1 survey telescope on Haleakala in Hawai‘i. When discovered in mid-October ‘Oumuamua was only about 85 times the Earth-Moon distance away and its discovery was announced in early November.

Since its discovery ‘Oumuamua has faded from view. The object’s rapidly increasing distance from the Earth and Sun now makes it too faint to be studied by even the largest telescopes.

“Needless to say, we dropped everything so we could quickly point the Gemini telescopes at this object immediately after its discovery,” said Gemini Director Laura Ferrarese who coordinated the Gemini South observations for Meech’s group.

‘Oumuamua shares similarities with small objects in the outer Solar System, especially the distant worlds of the Kuiper Belt - a region of rocky, frigid worlds far beyond Neptune. “While study of ‘Oumuamua’s colors shows that this body shares characteristics with both Kuiper Belt objects and organic-rich comets and trojan asteroids,” says Meech, “its orbital shape says it comes from far beyond.”

The research led by Meech is published in the November 20th online issue of the journal Nature.

‘Oumuamua was visible from Chile and Hawai‘i so both Gemini North and South telescopes were on high alert and ready to track the visitor from outer space. “We observed from both sites for three nights, before it sped away and faded from view," said Ferrarese. Two additional teams obtained data from Gemini North and their results are currently pending publication.

According to our current understanding of planetary system formation, our Solar System ejected comets and asteroids due to interactions with the larger outer planets. It is presumed that other planetary systems do the same and that these visitors might be more common than previously thought. “We estimate that there is always one of these objects of similar size as ‘Oumuamua between the Earth and the Sun at any given time, so up to about 10 per year,” says Robert Jedicke also on Meech’s team.

“These observations allow us to reach into another planetary system to learn about one of its rocky bodies, and compare this object with the asteroids we know throughout our own Solar System", says Faith Vilas, the solar and planetary research program director at the National Science Foundation who helped support this research.

Surveys like Pan-STARRS and the future Large Synoptic Survey Telescope (LSST, currently under construction near the Gemini South telescope in Chile) will undoubtedly increase the detections of these interstellar wanderers. “The discoveries of rare surprises like ‘Oumuamua from outside our Solar System will be greatly accelerated by the power and grasp of the LSST,” said Richard Green of the US National Science Foundation (NSF). “LSST is going to produce a torrent of data and revolutionize this sort of time domain astronomy when it begins operations early in the next decade,” adds Green. LSST is funded by a partnership with the NSF, the Department of Energy, and the LSST Corporation.

‘Oumuamua loosely means "a messenger that reaches out from the distant past," fitting the nature of the object's interstellar origin. In Hawaiian ‘ou means “to reach out for,” while mua means “first” and is repeated for emphasis. 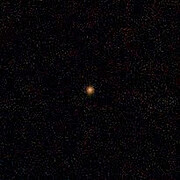