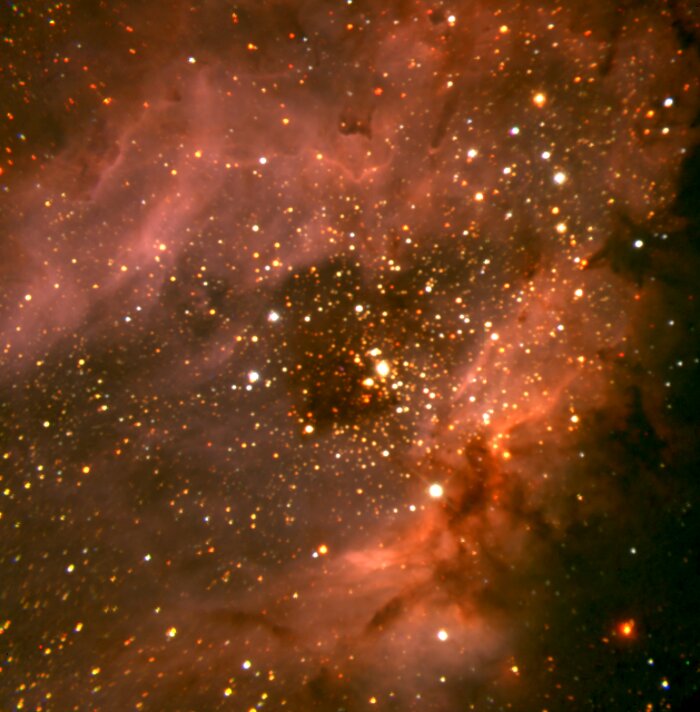 The Simultaneous Quad Infrared Imaging detector (SQIID) has returned to Kitt Peak with enhanced capabilities. This composite SQIlD multi-wavelength IR image of M17 (NGC6618), a region of massive star formation known variously as the Omega Nebula, the Swan Nebula, and the Horseshoe Nebula, was created by K. M. Merrill to illustrate the potential of the new PAH channel. This filter is centered on the location of a dust emission feature at 3.28 microns which shows up in many star formation regions, and which is normally attributed to polycyclic aromatic hydrocarbons (PAH). The dust is in emission due to the ultra-violet radiation of newly formed hot, luminous stars. The 540-second composite J- and K-band exposures were taken at the KPNO 2.1-meter telescope on 11 May 2000. The PAH data are archival data from the Cryogenic Optical Bench (COB) instrument. This image can be compared to optical images from the KPNO 0.9-meter, the KPNO Mayall 4-meter, and the KPNO Schmidt telescopes, and an emission line image from the KPNO Schmidt, revealing physical conditions in the nebula.