Gemini observations provide a key scientific context for a striking new image of the gravitationally lensed galaxy group popularly known as the Cheshire Cat. The image, released by NASA’s Chandra X-ray Observatory, combines X-ray data with optical images from the Hubble Space Telescope to paint a remarkable likeness to the famously devious smiling cat in Lewis Carrol’s Alice in Wonderland.

Behind the scenes, Gemini played a critical role in the image’s scientific story by taking the spectral fingerprints of many of the galaxies that make up the foreground cluster which bends the distant galactic light. For more details on the image, and how gravitational lenses work, see the Chandra press release here.

Gemini South astronomer Rodrigo Carrasco, a co-author on the paper which spawned the image, adds that Gemini provided the core spectroscopic data that allowed the team to fully characterize the cluster of foreground galaxies which serves as the lens. "With the Gemini data we were able to study the individual members of the cluster which we expect will eventually become fossil groups," says Carrasco. Fossil groups consist of a giant elliptical central galaxy which is the end-product of interactions with other galaxies over billions of years, and surrounded by smaller, less bright galaxies. "Our results indicate that merging of fossil groups – in this case, the Cheshire Cat – could be one of the ways that a large fraction of fossil groups in the nearby Universe formed."

Abstract: The Cheshire Cat is a relatively poor group of galaxies dominated by two luminous elliptical galaxies surrounded by at least four arcs from gravitationally lensed background galaxies that give the system a humorous appearance. Our combined optical/X-ray study of this system reveals that it is experiencing a line of sight merger between two groups with a roughly equal mass ratio with a relative velocity of ∼1350 km s-1. One group was most likely a low-mass fossil group, while the other group would have almost fit the classical definition of a fossil group. The collision manifests itself in a bimodal galaxy velocity distribution, an elevated central X-ray temperature and luminosity indicative of a shock, and gravitational arc centers that do not coincide with either large elliptical galaxy. One of the luminous elliptical galaxies has a double nucleus embedded off-center in the stellar halo. The luminous ellipticals should merge in less than a Gyr, after which observers will see a massive 1.2 − 1.5 x 1014 M⊙ fossil group with an Mr = −24.0 brightest group galaxy at its center. Thus, the Cheshire Cat offers us the first opportunity to study a fossil group progenitor. We discuss the limitations of the classical definition of a fossil group in terms of magnitude gaps between the member galaxies. We also suggest that if the merging of fossil (or near-fossil) groups is a common avenue for creating present-day fossil groups, the time lag between the final galactic merging of the system and the onset of cooling in the shock-heated core could account for the observed lack of well-developed cool cores in some fossil groups. 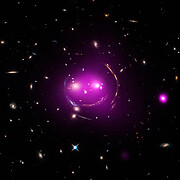