Using high signal-to-noise optical spectroscopy from Gemini, and Hubble Space Telescope imaging of three intermediate redshift galaxy clusters, Gemini astronomers Inger Jørgensen and Kristin Chiboucas have shed new light on galaxy evolution. The team’s paper, accepted for publication in The Astronomical Journal, shows that the mass to light ratios of the galaxies indicate that low-mass galaxies have experienced more recent star formation than high-mass galaxies. Both the mass-to-light ratios and the Balmer lines (hydrogen lines) can be used to estimate the ages of the galaxies. However, the Balmer lines indicate that all of the galaxies are very old, leading to a contradiction between the two methods of age determination.

Furthermore, the metal lines (or metallicity, an indication of the presence of elements heavier than hydrogen and helium which are formed in previous generations of stars) show that there are metallicity differences when comparing the clusters. This is in contradiction with the passive evolution of these galaxies and may indicate that either ongoing star formation or mergers may need to play a role in their future evolution to make them resemble nearby galaxies.

The results originate from the Gemini/HST Galaxy Cluster Project (GCP), and focus on early-type elliptical and lenticular galaxies in three of the richest clusters that are part of the GCP sample. The GCP aims to constrain models for galaxy formation and evolution by providing large data sets of galaxies in rich clusters between redshifts of one and the present. The full GCP covers 15 rich clusters selected based on their X-ray luminosity

The three clusters follow similar scaling relations between absorption line indices and velocity dispersions as those found for low-redshift galaxies. The zero point offsets for the Balmer lines depend on cluster redshifts. However, the offsets indicate a slower evolution, and therefore higher formation redshift, than the zero point differences found from the M/L ratios, if interpreting the data using a passive evolution model (see Figure 1b).

Based on the absorption line indices and recent stellar population models, the team finds one cluster, MS0451.6-0305 (Figure 2a) with lower metallicity than the others, and one cluster, RXJ0152.7-1357 (Figure 2b), with higher alpha-element abundance ratio than the others. In order to evolve galaxies in these clusters into galaxies similar to low redshift galaxies, the MS0451.6-0305 galaxies would require on-going low-level star formation and the RXJ0152.7-1357 galaxies would need to experience mergers. Passive evolution alone in the time available is insufficient. 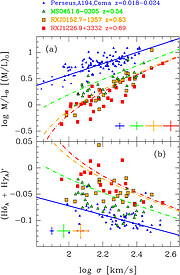