Vinicius Placco, an Associate Scientist at NOIRLab, has led a team of astronomers to identify one of the oldest stars in the galaxy, born over 10 billion years ago from material produced by the very first generation of stars.

The first generation of stars have never been seen, but indirect measurements suggest that they began to form 180 million years after the Big Bang. Models predict that these very first stars would have been humongous, with dozens or perhaps hundreds of times the mass of the Sun, and would have lived relatively short lives before exploding as supernovae.

The only materials present to make the first stars were those few elements that had formed in the Big Bang — hydrogen, helium and a very small amount of lithium. There were no heavier elements — no carbon, no oxygen, no nitrogen, no iron and so forth. Astronomers call elements heavier than hydrogen and helium “metals” — confusingly these include non-metallic elements too. 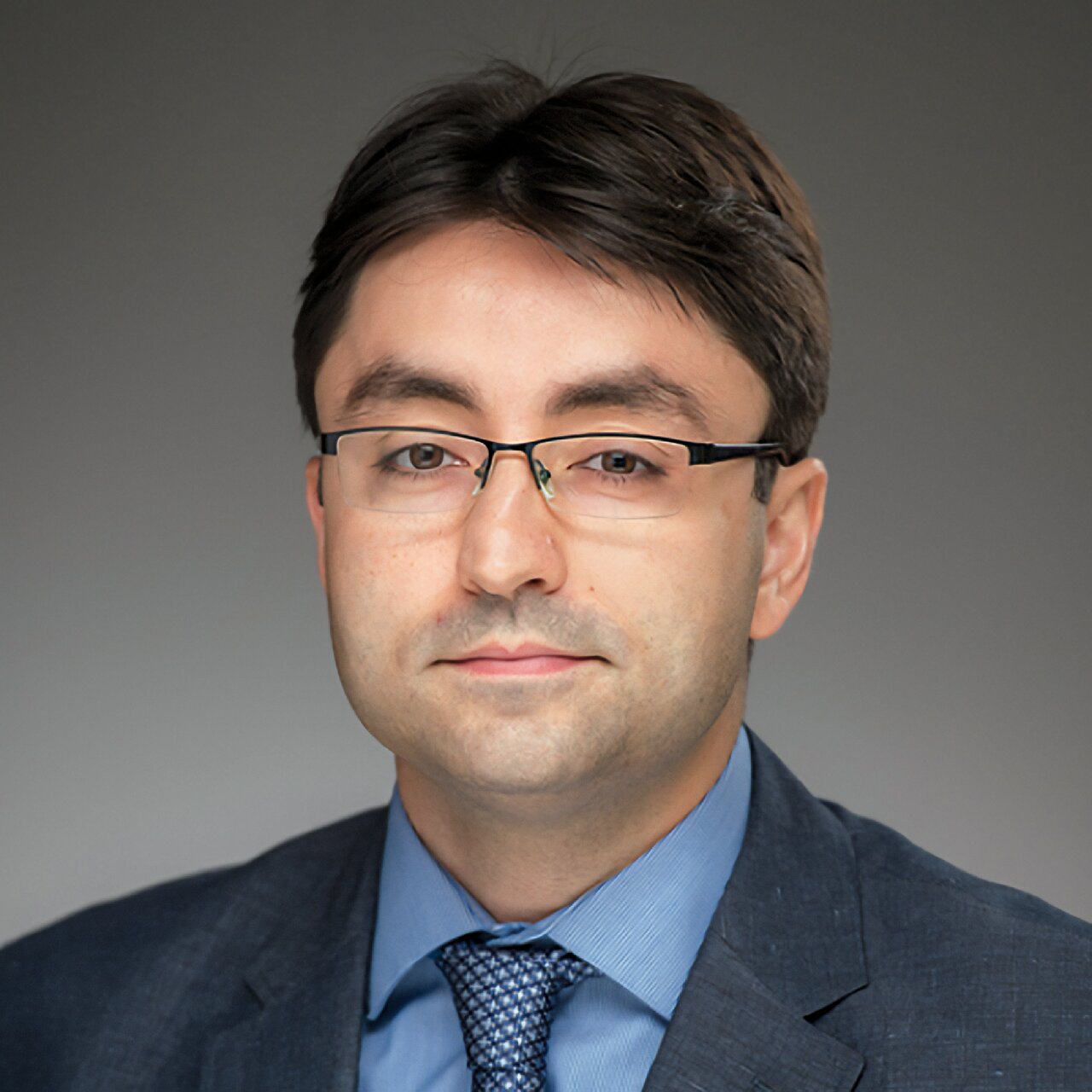 Vinicius Placco is an Associate Scientist at NOIRLab, who focuses his research on stellar and galactic archaeology.
Credit: V. Placco

These metals are formed by the nuclear reactions either inside stars or during explosive events such as a supernova. When a star dies, it expels them into space, and they become mixed with the hydrogen and helium, enriching the interstellar gas clouds that go on to form the next generation of stars.

It’s a cumulative effect — the more generations of stars there are, the more heavy elements become available to form in subsequent generations of stars. Astronomers can use the abundance of heavy elements within a star (known as its “metallicity”) to estimate its age. The youngest stars have the greatest abundance — the highest metallicity — while the oldest stars have the least.

Stars produce all the elements in the Universe heavier than hydrogen and helium, and when they die they eject these elements into space, where they eventually find themselves inside the next generation of stars. 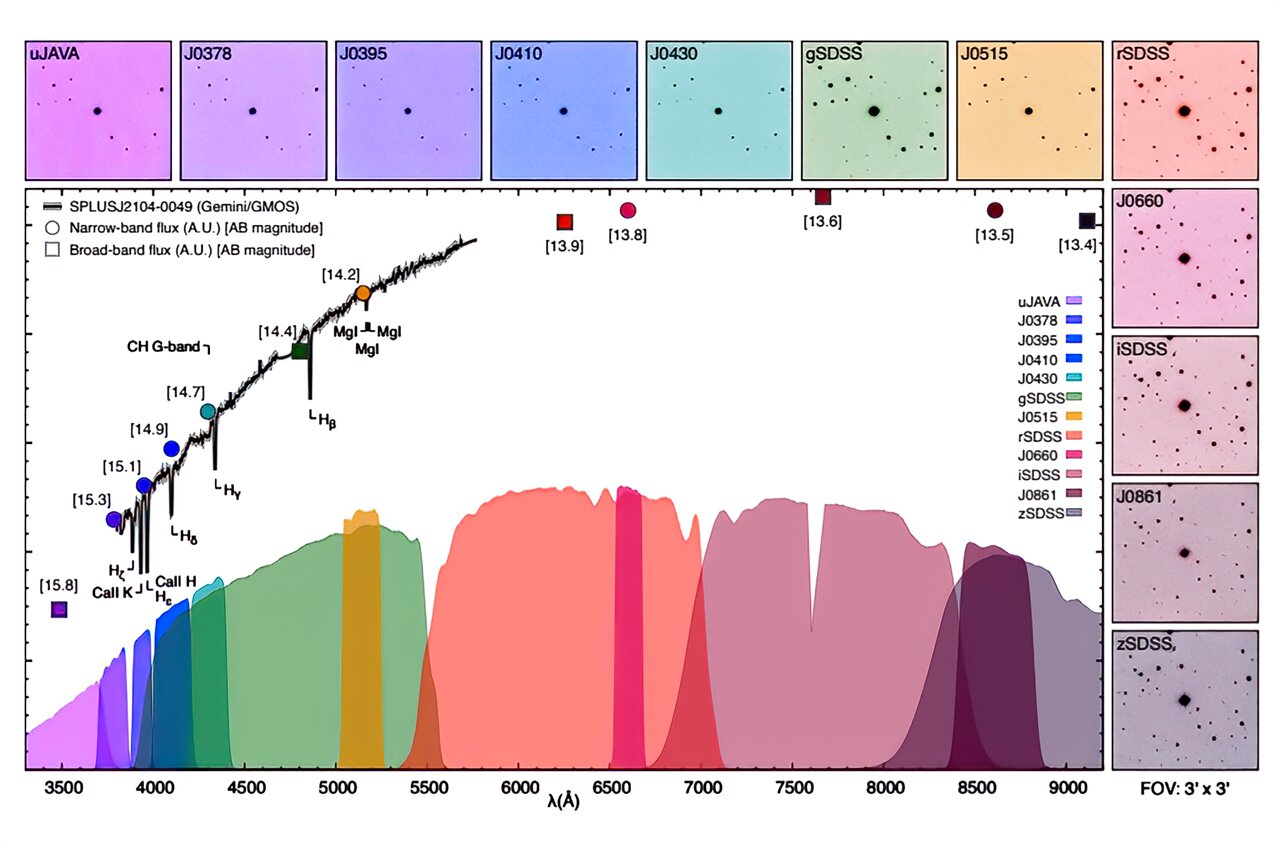 Running across the top and down the right-hand side are 12 images of SPLUS J2104−0049, taken from NOIRLab's Astro Data Lab, each image taken through a different filter. The graph shows the emission wavelength seen through each filter, color-coded. The black squiggly line is the spectrum seen by the Gemini Multi Object Spectrographs instrument, and the circles and squares are the measurements made through narrowband (filled circles) and broadband (filled squares) filters.
Credit: Placco et al., 2021.

The less massive a star is, the longer it lives. Stars born in that second generation with the mass of the Sun or less can still be around today.

Prior to this year, astronomers had only discovered 34 of these ultra-metal-poor stars originating from that second generation. Now NOIRLab’s Vinicius Placco and his colleagues have used several NOIRLab facilities to find another of these rare stars. Here’s how they did it:

“It started with me just getting some tables of data from NOIRLab’s Astro Data Lab,” says Placco. The data came from the Southern Photometric Local Universe Survey (SPLUS), which is mapping the southern-hemisphere sky with a 0.83-meter telescope at NOIRLab’s Cerro Tololo Inter-American Observatory in Chile.

Prior to this year, astronomers had only discovered 34 ultra-metal-poor stars originating from that second generation. Now, NOIRLab’s Vinicius Placco and his colleagues have used several NOIRLab facilities to find another of these rare stars.

“SPLUS observes the night sky through 12 different filters, many of which are narrow band, and they are important for picking out different chemistry and temperatures of stars,” says Placco. The data from the survey contained information on millions of stars in our galaxy, and Placco and his team had to sift through all these stars, down-selecting to just a hundred that appeared to have unusually low metallicities.

The next step was to get better information on those 100 stars, and so he applied for time on the poor-weather program on NOIRLab’s 8-meter Gemini South telescope in Chile. 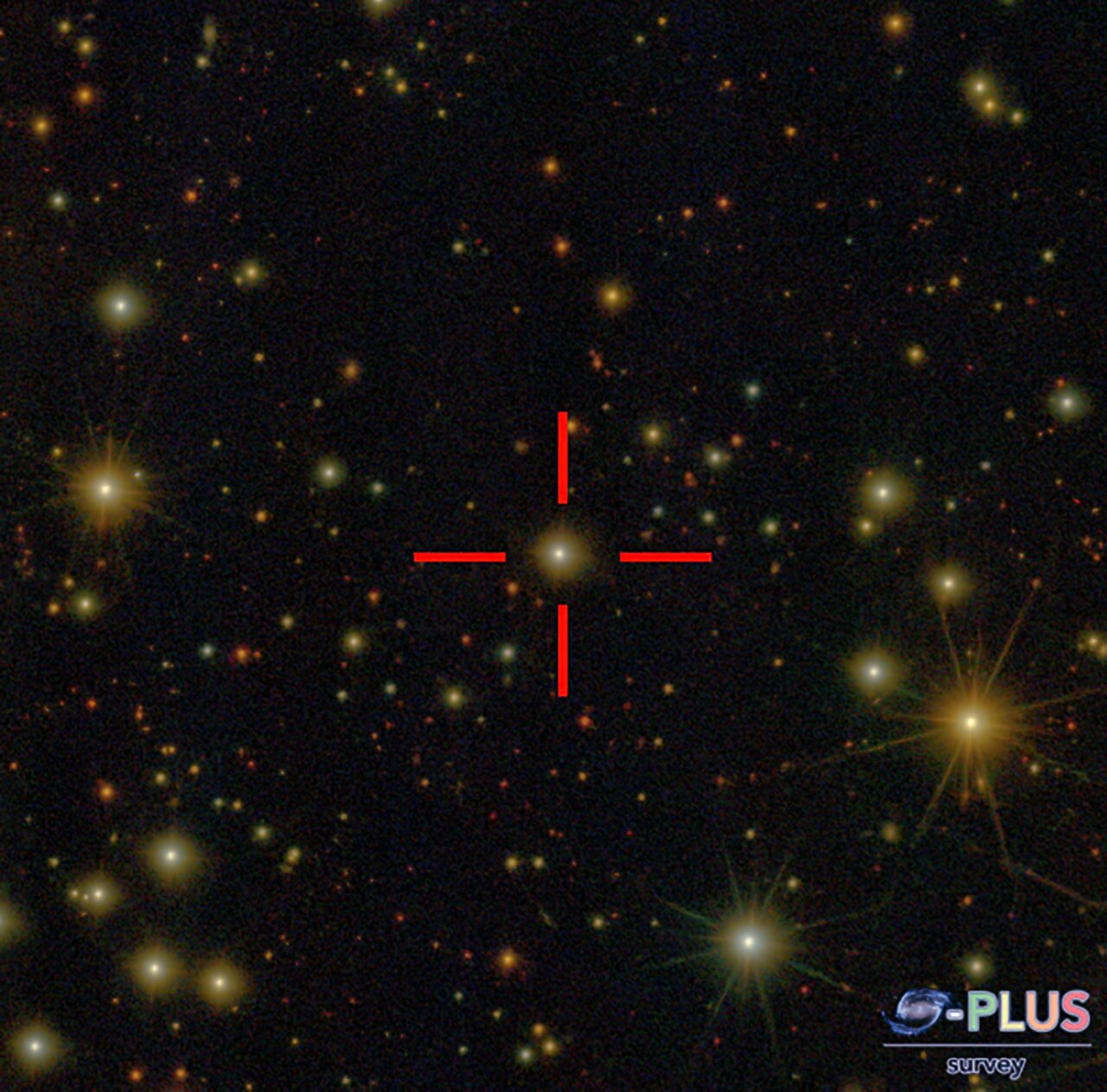 One of the oldest known stars in the Universe, SPLUS J2104-0049
Credit: S-PLUS Survey

“This is time that would otherwise be considered weather-loss by the observatory,” says Placco. While poor weather can affect the seeing conditions (such as the amount of turbulence in the atmosphere, or the presence of airborne dust) and can hamper and postpone detailed observations of faint galaxies, for example, it can still be suitable for observing relatively bright stars in our galaxy, particularly when all that one needs is medium-resolution spectroscopy.

Based on the Gemini South observations, Placco and his colleagues then whittled down the 100 candidates to just one star that seemed to have an exceptionally low metallicity. The star’s full catalog name is SPLUS J210428.01−004934.2, but we’ll refer to it as SPLUS J2104−0049 for short.

“In the very last step, we then used another telescope, the 6.5-meter Magellan-Clay at Las Campanas Observatory in Chile to get the high-resolution spectroscopy data that we used to calculate all of the chemical abundances and reach a conclusion about the nature of the star,” says Placco.

In this sense, SPLUS J2104−0049 is already challenging what astronomers thought they knew about ultra-metal-poor stars. The gas cloud that formed SPLUS J2104−0049 over 10 billion years ago must have been incredibly pristine, enriched only by the debris from the supernova of a single 30-solar-mass star that would have belonged to the first generation of stars. 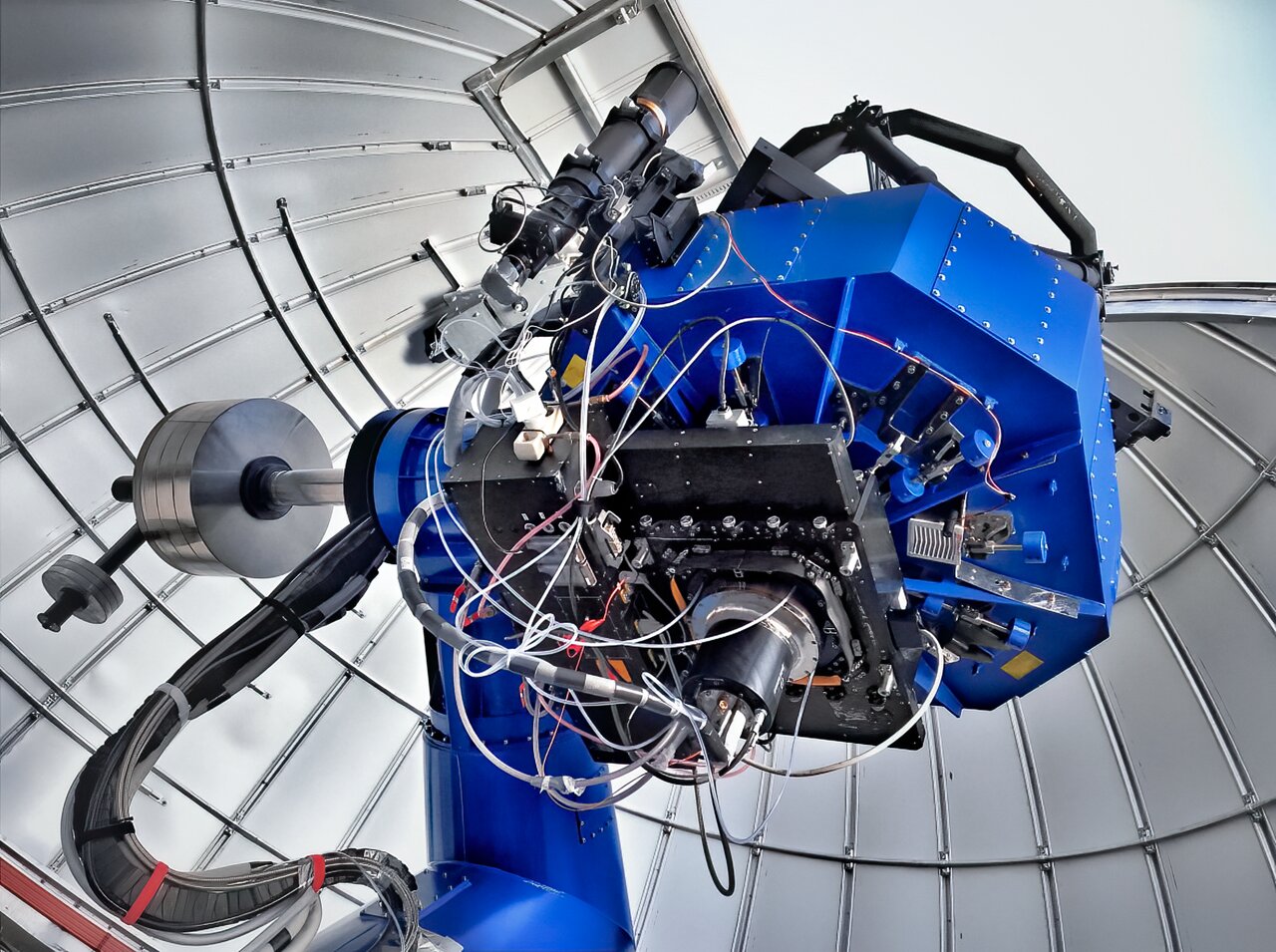 The Southern Photometric Local Universe Survey, or SPLUS, which is mapping the southern-hemisphere sky with a 0.83-meter telescope at NOIRLab’s Cerro Tololo Inter-American Observatory in Chile
Credit: S-PLUS Survey

“We believe we are seeing just the ‘genetic information’ of the first generation of stars,” says Placco. “This is really important because it helps us constrain models of the birth of the first stars and the chemical evolution of the Universe and how structures form right after the Big Bang.”

So, although astronomers have yet to find one of the stars from the very first generation, which would have absolutely no heavy elements at all, the really cool thing about discovering ultra-metal-poor stars like SPLUS J2104−0049, which belong to the second generation, is that astronomers are able to infer what those stars of the first generation may have been like.

This is really important because it helps us constrain models of the birth of the first stars and the chemical evolution of the Universe and how structures form right after the Big Bang.

At the moment, 34 ultra-metal-poor stars probably isn’t a big enough sample from which to draw any firm conclusions, but Placco proposes that if astronomers could increase the number known to about 100, with help from new observatories such as NOIRLab’s Vera C. Rubin Observatory Program, then we could really begin to imagine what the very first stars to light up the Universe would have been like.