The Dark Energy Spectroscopic Instrument (DESI) at NOIRLab’s Nicholas U. Mayall 4-meter Telescope at Kitt Peak National Observatory, is about to begin its five-year survey to probe the secrets of the accelerating expansion of the Universe, creating the largest ever three-dimensional map of the cosmos in the process.

Dark energy is the mysterious force that is causing the Universe to expand ever faster, moving galaxies away from each other. In order to better understand how dark energy behaves and what its properties are, DESI is going to capture optical spectra for approximately 30 million galaxies, covering 11 billion years of cosmic history.

The redshifts of galaxies - that is, the amount by which their light has been stretched to longer wavelengths by the expansion of space - can tell astronomers not only how far away a galaxy is, but how fast it is moving away from us. Astronomers want to see if dark energy was stronger or weaker in the past, and whether it has the same strength in all directions. This kind of information will help scientists narrow down the range of possibilities for what dark energy could actually be. 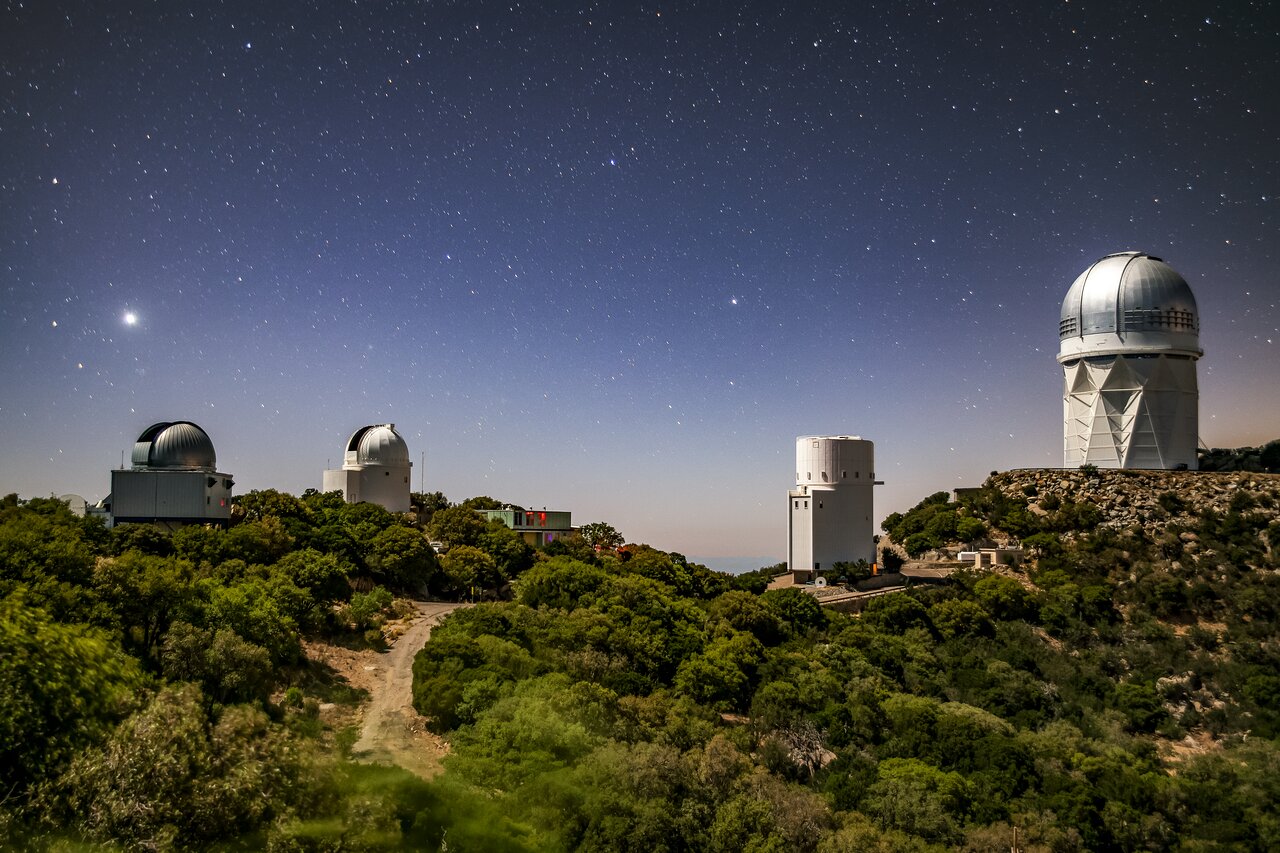 To accomplish this DESI will create the largest map of the Universe, thanks to its next-generation instrumentation. “Its unique instrumentation is one of the things that makes DESI exciting, ” says Parker Fagrelius, DESI's Operations Supervisor at NSF's NOIRLab in Tucson, Arizona.

DESI builds on instrumentation originally developed for the Baryon Oscillation Spectroscopic Survey (BOSS), a precursor to DESI that was part of the Sloan Digital Sky Survey (SDSS) at Apache Point in New Mexico. BOSS made use of an instrument that was able to simultaneously take the spectra of a thousand objects in the field of view. However, to map 30 million galaxies, DESI has to work faster.

“DESI is taking a giant step forward by measuring 5,000 spectra at a time,” says Fagrelius. “This is possible by using a quickly changeable focal plane."

The Dark Energy Spectroscopic Instrument (DESI) will create the largest map of the Universe thanks to its next generation instrumentation.

The focal plane is exactly what it sounds like - a plane within the instrument where the light from the telescope comes to focus. The focal plane on BOSS featured an aluminum plate punched through by a thousand holes, and optical fibers attached to spectrographs could be poked through the holes to coincide with galaxies in the sky. This meant that several times throughout the night, technicians would have to switch out plates to coincide with a new set of galaxies as the telescope's field of view moved. On the other hand, DESI's focal plane features optical fibers attached to robotic positioners, which can automatically move the fibers to align them on different sets of objects in the sky.

"So these 5,000 robotic positioners will align the fibers to 5,000 objects, and then 20 minutes later, all the positioners will be moved and they'll align with 5,000 new objects," explains Fagrelius. “This is a somewhat new concept and DESI is really showing that it's possible to use a focal plane like this."

Measuring so many objects in quick succession brings with it a torrent of raw data, night after night. This is a challenge that is being met by DESI's scientists, including NOIRLab's Aaron Meisner . 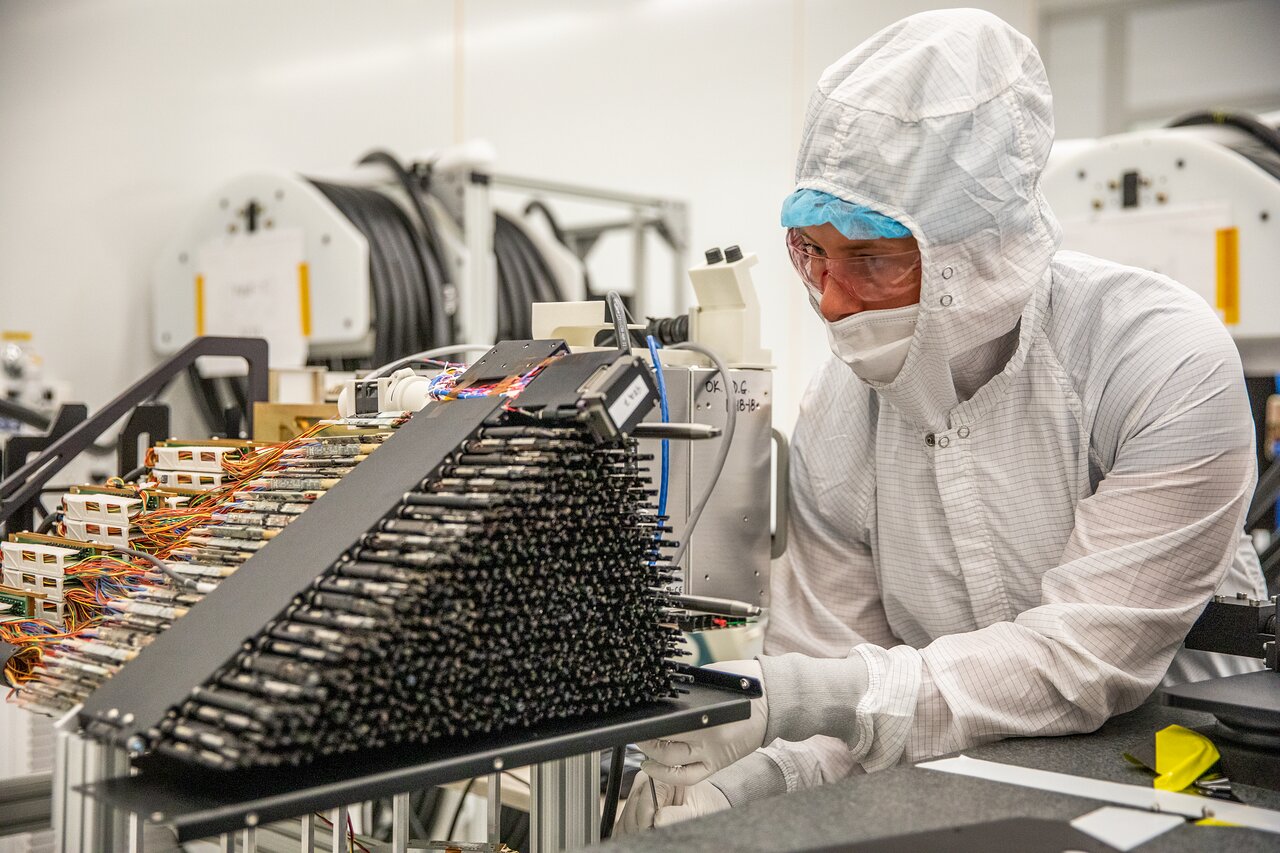 “We have a phrase, 'redshifts by breakfast',” says Meisner. “We've developed a really nice, high-performance computing system to give us all of the information that we took the previous night by the next morning."

The raw data collected by DESI are initially saved at Kitt Peak, but within a matter of minutes they are transferred to the National Energy Research Scientific Computing Center (NERSC) at Berkeley Lab in California. NERSC is one of the most powerful supercomputers in the United States, where the data are processed and - in collaboration with the Community Science & Data Center (CSDC) - made available to astronomers in the DESI team by dawn.

There are more than 500,000 components in the Dark Energy Spectroscopic Instrument's (DESI) focal plane.

The reasons for running the data through the pipeline so quickly are twofold. First, with such huge amounts of data being collected (it is expected that DESI will publicly release 100 Terabytes of data each year), there is the danger of bottlenecks in the system if the raw data aren't processed immediately. Second, astronomers will be combing the DESI data for more than clues about dark energy. The data will also capture unique transient phenomena, such as unusual supernovae or fluctuating quasars, and astronomers need to be able to identify and jump on these quickly in order to follow up on them as soon as possible. 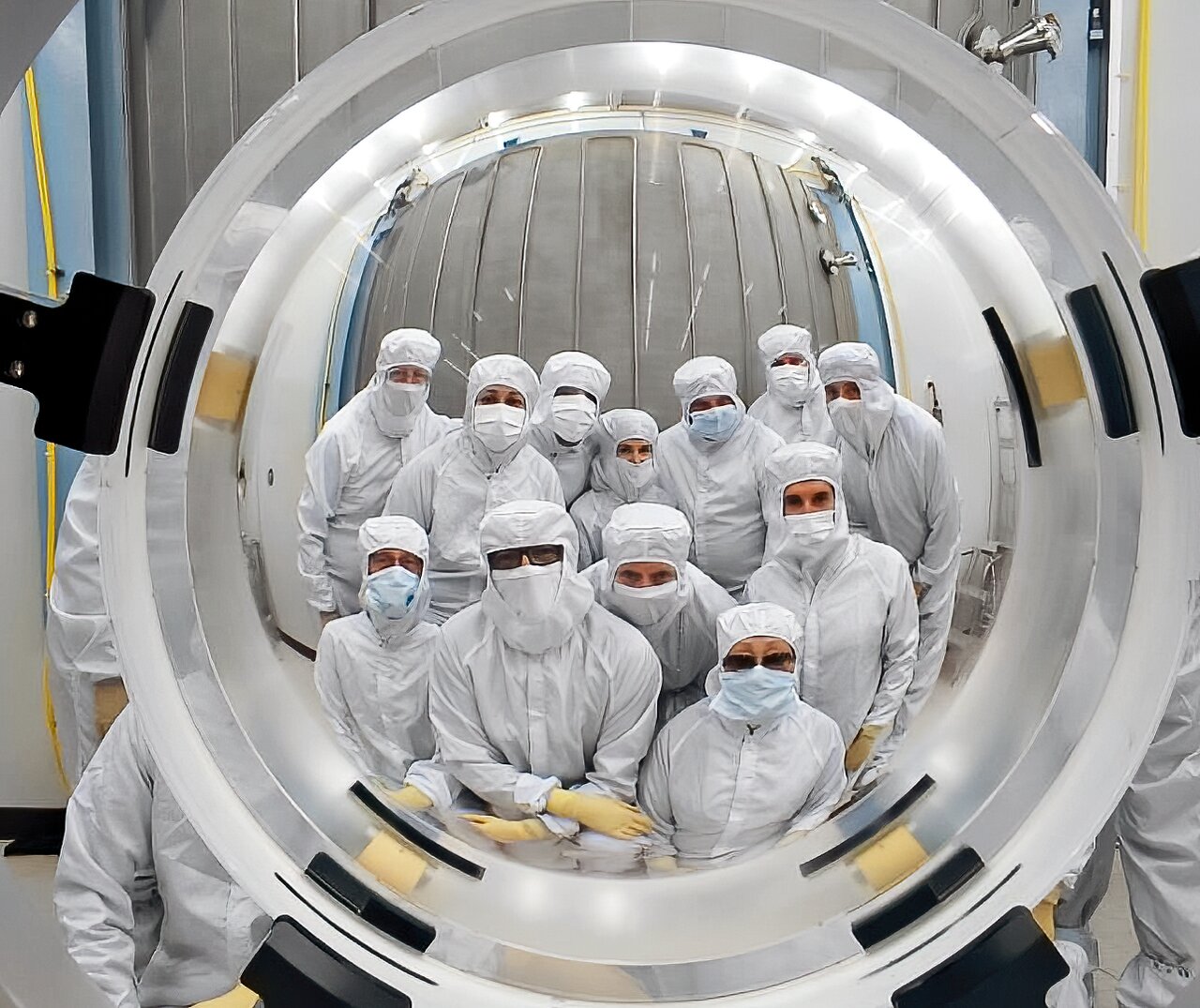 "Every night there's a chance of finding something really odd, weird or unusual among the hundred thousand spectra collected on a given night, that unto itself might be a big discovery," says Meisner. “My scientific interest is in doing what we call 'rare object searches', finding unique or informative systems that are unlike things that people have seen before. So just from a pure discovery standpoint, having these millions and millions of spectra, it's going to be super exciting to see what kinds of objects we find in there."

Another problem, given that there are no maps of the Universe as large or in-depth as the one that DESI will create, has been finding the right targets for the instrument to measure.

We have a phrase, 'redshifts by breakfast'. We've developed a really nice, high performance computing system to give us all of the information that we took the previous night by the next morning. 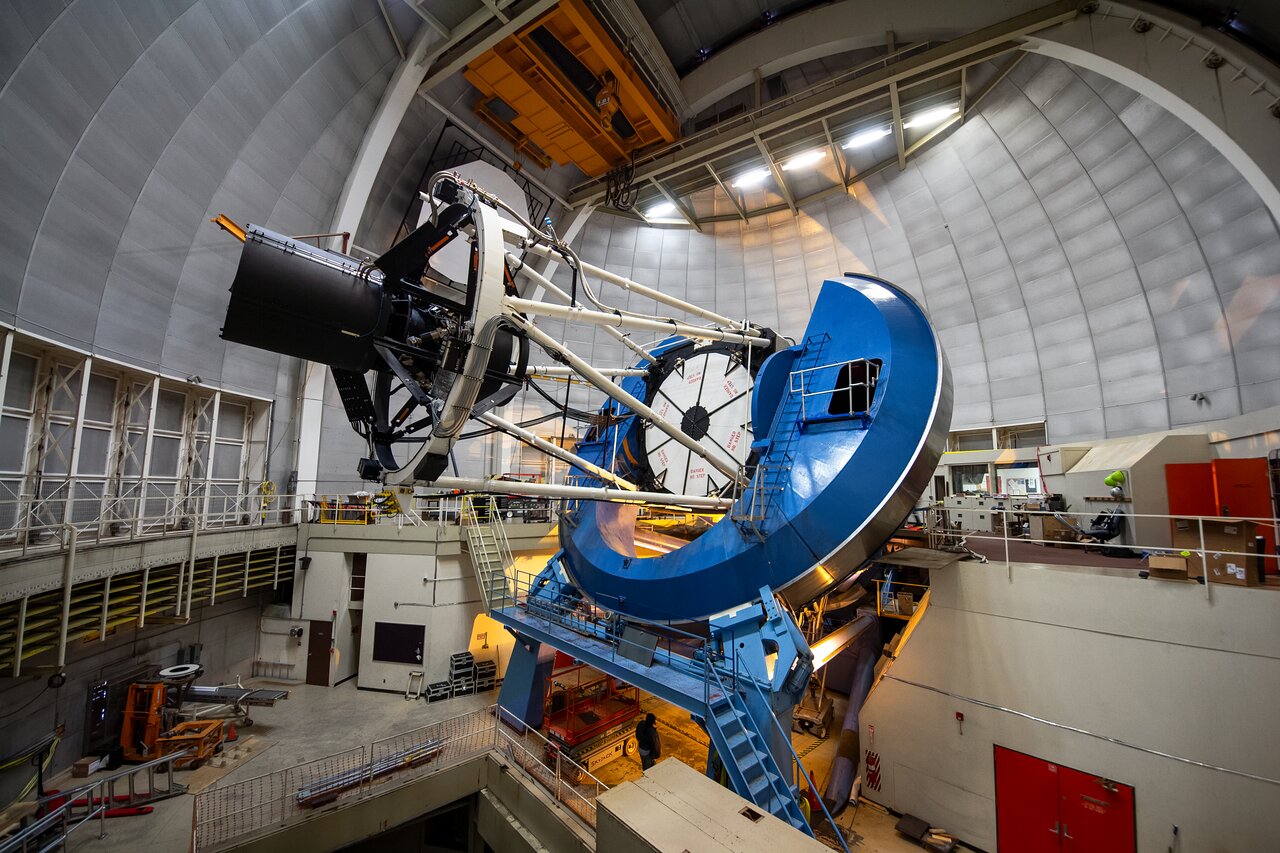 Besides shedding light on dark energy, the DESI team will be combing data for transient objects such as supernovae and quasars. DESI is seen here installed on the Nicholas U. Mayall 4-meter Telescope.
Credit: NOIRLab/KPNO/NSF/AURA/P. Marenfeld

“None of the existing sky maps was big enough or deep enough to tell us what targets to select,” says Meisner, who has been addressing this problem by conducting observations with the Mayall Telescope and its sister facility, the Víctor M. Blanco Telescope at the Cerro Tololo Inter-American Observatory in Chile to gather data, while also consulting the infrared maps of NASA's Wide-field Infrared Survey Explorer (WISE) spacecraft.

Once the current survey validation - that is, performing observations to calibrate and confirm that the instrument is working to specifications - is complete, DESI will move headlong into its revolutionary five-year survey. 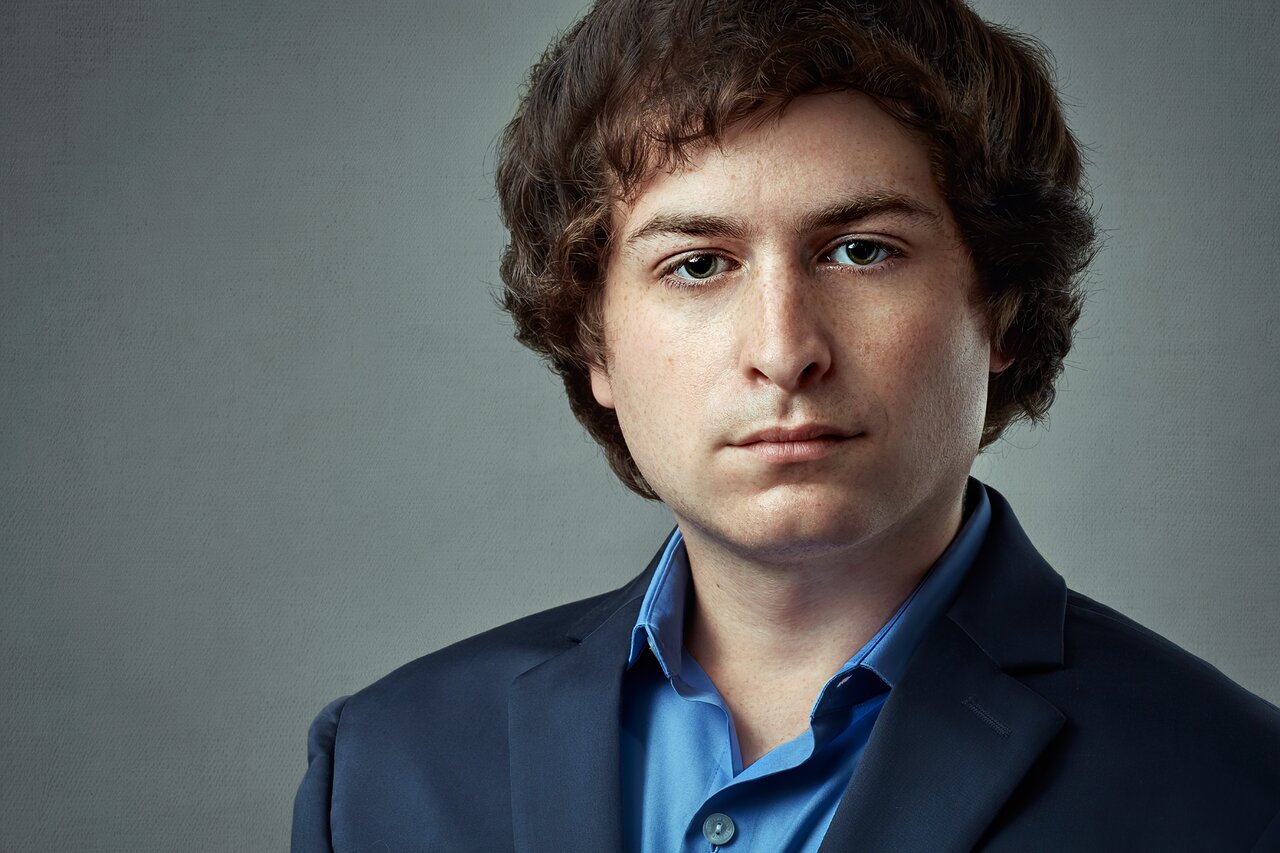 Aaron Meisner is a core member of the DESI team. He specializes in making and analyzing full-sky, high-resolution maps from large astronomical data sets.
Credit: A. Meisner

While it will take a year or two's worth of data to begin to draw any conclusions about dark energy, “we've already been using the instrument for quite some time,” says Fagrelius. “And we're already getting spectra from a huge number of objects, and we've found a lot of objects that are super interesting already."