Students at the University of Chicago have discovered the brightest gravitationally lensed galaxy from the early Universe, in data collected by the Dark Energy Camera (DECam), and the discovery could reveal crucial information about the early life of galaxies.

Making a new discovery is the highlight of any astronomer’s career, but imagine doing so when you are still just just an undergraduate student. That’s exactly what a class of undergrads at the University of Chicago have done, by discovering the most strongly gravitationally lensed galaxy in the early Universe.

The COOL-LAMPS project, which stands for ChicagO Optically selected strong Lenses — Located At the Margins of Public Surveys, began in December 2019 as a way of giving students research experience in lieu of being able to travel to observatories because of the COVID-19 pandemic. It’s run by Professor Michael Gladders and University of Chicago PhD candidate Gourav Khullar, who is a teaching assistant on the course.

Gravitational lenses were predicted by Albert Einstein in his General Theory of Relativity, and the most extreme example of a gravitational lens is an Einstein Ring, where the galaxy is warped into a ring-shape.

“[The course] is built around the CURE framework — Course-based Undergraduate Research Experience,” says Khullar. “The objective of COOL-LAMPS since its inception is to discover and characterize rare strong-gravitationally lensed systems.”

A gravitational lens is created when the immense gravity of a massive object, such as a galaxy cluster, bends space, resulting in a lens-like effect where the light of background objects is distorted and magnified. The most extreme gravitational lenses can stretch images of galaxies into wispy arcs, but because the lensed images are magnified, they give astronomers the opportunity to see galaxies at a level of detail that would otherwise be too faint to study.

To search for gravitationally lensed galaxies, the students sifted through publicly available datasets from a host of powerful ground-based observatories. These include data from DECaLS, the Dark Energy Camera Legacy Survey, which was performed by the Dark Energy Camera, mounted on the Víctor M. Blanco 4-meter Telescope at NOIRLab’s Cerro Tololo Inter-American Observatory in Chile. Funded by the US Department of Energy (DOE) and built and tested at DOE’s Fermilab, DECam was operated by DOE and the National Science Foundation (NSF) between 2013 and 2019, and the DECam science archive is curated by the Community Science and Data Center (CSDC) at NOIRLab. 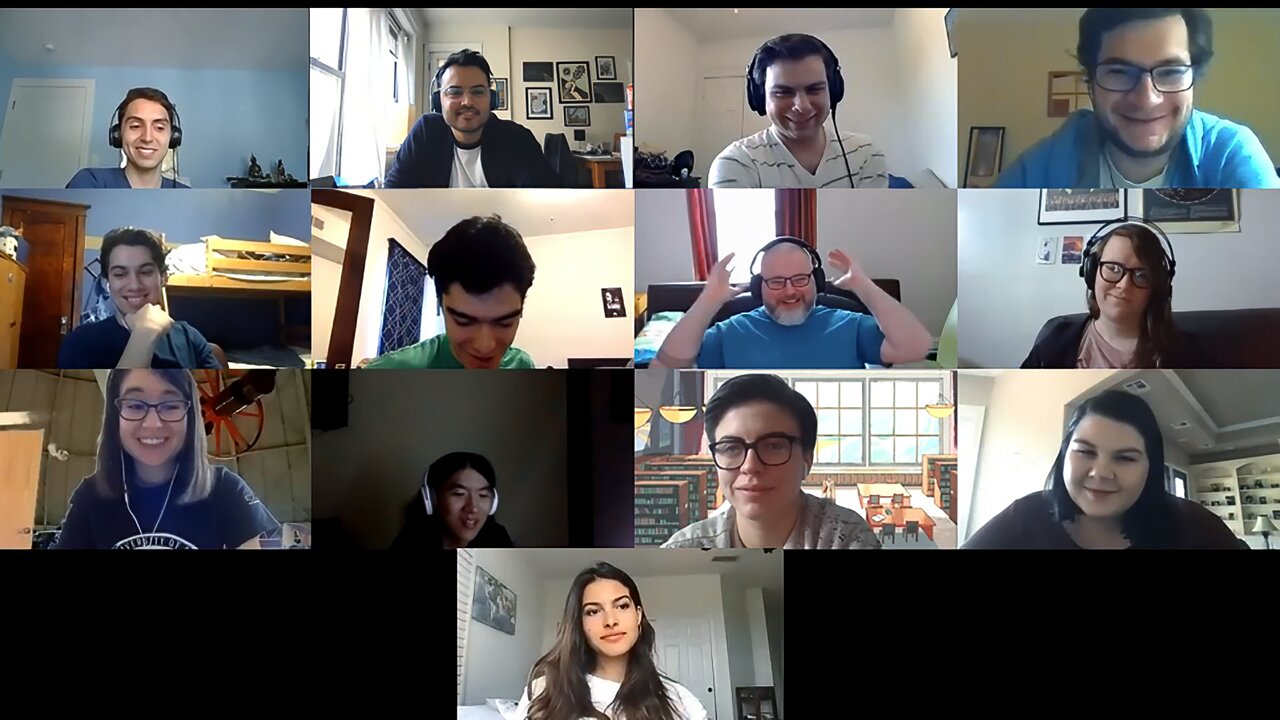 It was while studying the DECaLs dataset that the students found the lensed image of a galaxy that existed 1.2 billion years after the Big Bang, located at a redshift of 5.04. Named COOL J1241+2219, or CJ1241 for short, the galaxy is the brightest galaxy ever seen in the very early Universe, five times more luminous than its closest rival. It is being lensed by a massive foreground galaxy cluster about 7.7 billion light-years distant.

“Having a dataset like DECaLS is fundamental to these studies,” says Khullar. “With imaging surveys that are able to detect fainter objects and scan wide portions of the sky, our collaboration has been able to inspect about 1 million lines of sight and has cataloged more than 1,000 lensing candidates so far. From a research and pedagogical perspective, DECaLS imaging catalogs are extremely useful.”

The COOL-LAMPS collaboration never expected to chance upon such an important discovery, since CJ1241 provides a rare opportunity to study a galaxy in the early Universe in greater detail than usual. In particular, they wanted to know more about the galaxy’s history of star formation, which could teach us about its evolution. To this end, Khullar applied for Director’s Discretionary Time to use the Gemini North Near-Infrared Spectrograph (GNIRS) on NOIRLab’s Gemini North Telescope in Hawaiʻi.

While studying the DECaLs dataset the students found the lensed image of a galaxy that existed 1.2 billion years after the Big Bang. Named COOL J1241+2219, or CJ1241 for short, the galaxy is the brightest galaxy ever seen in the very early Universe

A small fraction of observing time at the International Gemini Observatory is given to Director’s Discretionary Time, which is reserved for a variety of projects, such as urgent observations of transient objects such as supernovae, or short but unique observations that are likely to have high scientific impact. 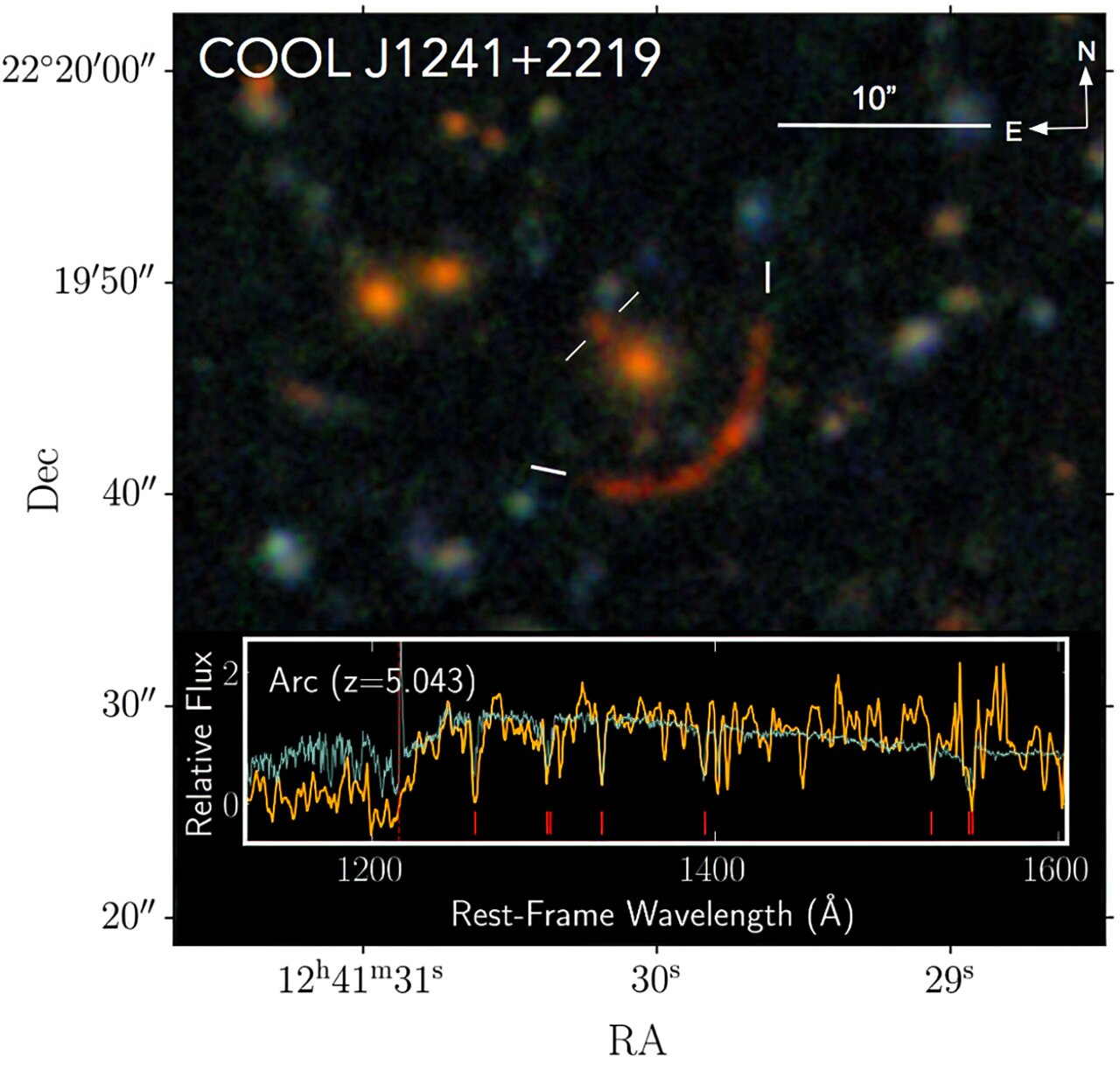 The red arc is the gravitationally lensed image of the galaxy COOL J1241+2219. The graph at the bottom is the spectra of its light, showing absorption and emission lines that tell of star formation and a lack of interstellar dust.
Credit: COOL-LAMPS/University of Chicago.

The GNIRS observations showed that the distant galaxy is both massive and intrinsically luminous compared to other known galaxies of its era. Often in the early Universe, galaxies would grow in mass through merging with other galaxies, and this would kickstart a ‘starburst’ that would frenetically form new stars. However, the observations imply that CJ1241 hasn’t been involved in any cosmic collisions, but has just been steadily forming stars at a relatively high rate for about a billion years. Despite the distorted shape of the galaxy seen through the gravitational lens, it is possible to resolve details in the galaxy down to hundreds of light years in scale — that’s impressive for a galaxy whose light has been travelling for 12.6 billion years to reach us. 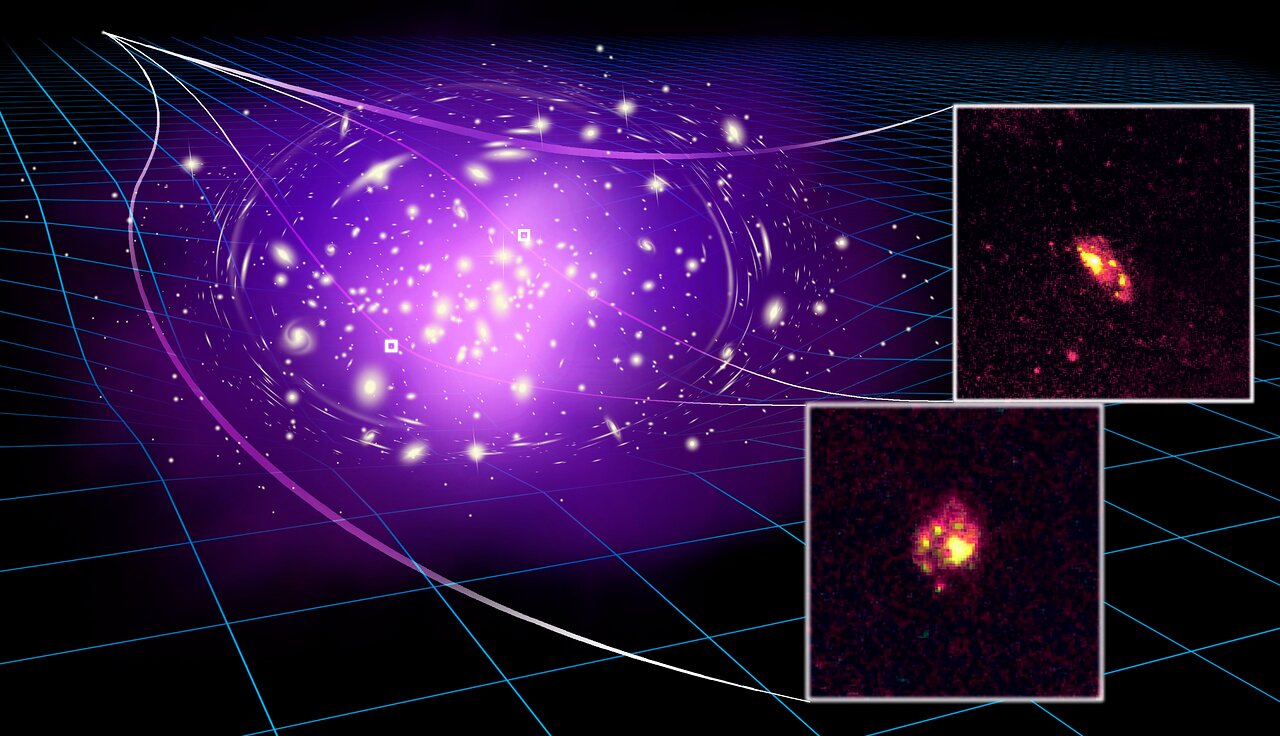 Artwork showing how the gravity of a foreground massive galaxy cluster can bend the light of more distant galaxies.
Credit: James Josephides

“We hope that CJ1241 can be a benchmark for studies of how galaxies in the early Universe form and assemble their mass,” says Khullar, who is now leading upcoming observations of this important, distant galaxy with NASA’s Chandra X-ray Observatory, the Hubble Space Telescope, the Very Large Array radio telescope, and the James Webb Space Telescope.

As for the students of the COOL-LAMPS collaboration, fresh off their first published research paper, they are continuing their search for gravitationally lensed galaxies, with new members added to their group — not just in the hope of making a name for themselves in science but also launching their new careers as astronomers.

Where we find COOL J1241+2219 in the context of the history of the Universe.
Credit: NASA