Ryan Lau, an astronomer at NSF’s NOIRLab, has led some of the first observations with NASA’s JWST, finding at least 17 rings of dust emanating from a binary star system. The new data show that the dust is rich in carbon and seems to be surviving to seed space far beyond its parent star with heavy elements, meaning it could play a role in the formation of later stars and planets.

As NASA’s James Webb Space Telescope, a partnership with ESA (European Space Agency) and CSA (Canadian Space Agency), soared into the sky on 25 December 2021, a particular group of people watched its launch with more excitement than most — the astronomers who were first in line to test the capabilities of this fledgling observatory, including an impressive cadre at NSF’s NOIRLab.

Among these scientists was Ryan Lau, an astronomer at NSF’s NOIRLab who studies how explosive astronomical events can enrich the space between stars with dust, eventually leading to the creation of new stars and planets. His team has published a paper in Nature Astronomy on one of the earliest results from the JWST, adding an essential piece to this cosmic puzzle.

The build-up to this observation has been a long one for Lau, who first thought about applying for observing time with the JWST in 2016, when he was a postdoc at Caltech. Lau had become interested in a group of celestial objects called Wolf-Rayet (WR) stars — huge stars at least 25 times the mass of the Sun that are nearing the end of their lives. During their stellar swan song, these objects burn brighter and hotter than almost all other stars in the Universe. Their extreme surface temperatures also generate powerful stellar winds, which blow out enormous quantities of gas into their surroundings. 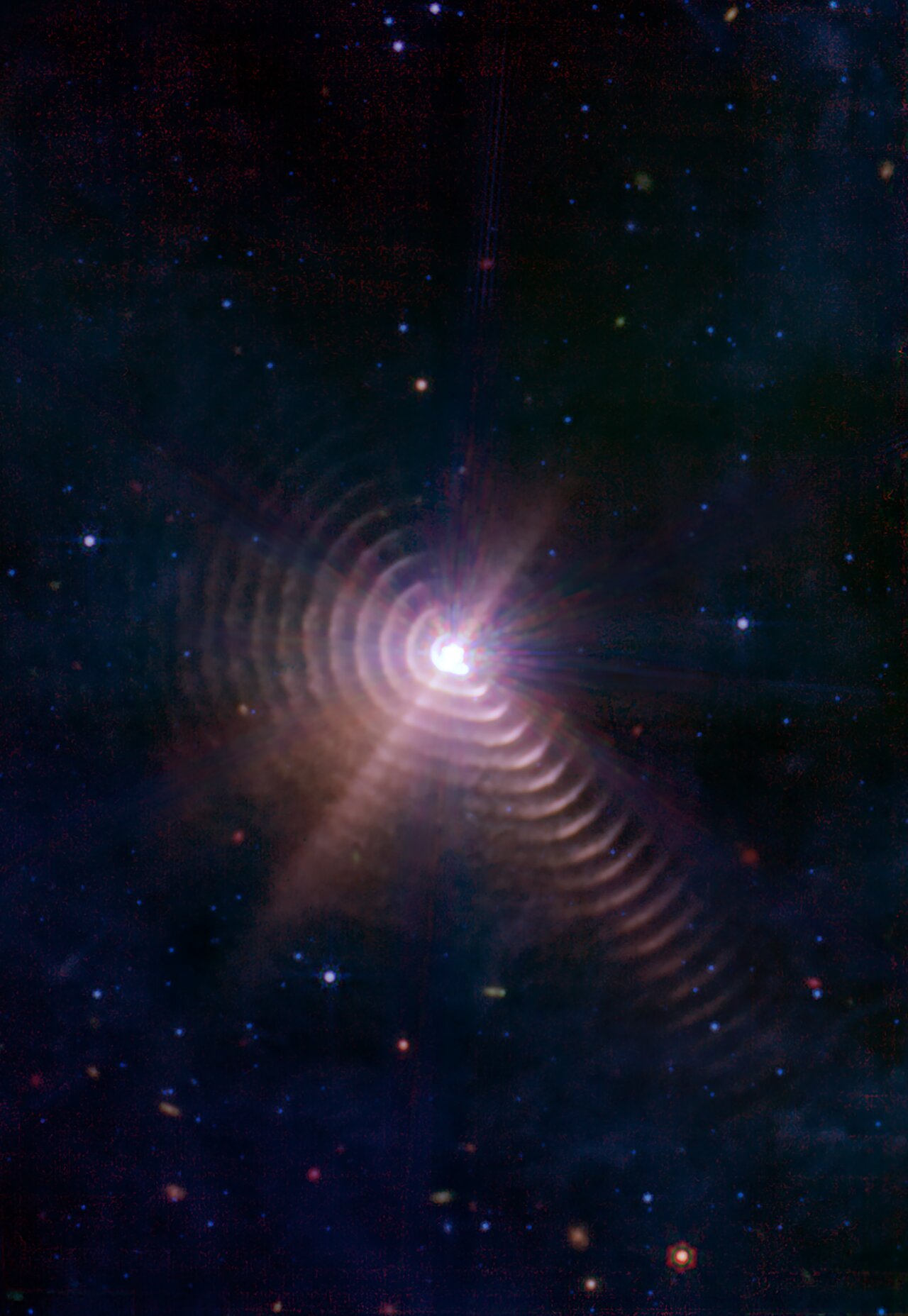 The two stars in Wolf-Rayet 140, shown here, produce shells of dust every eight years that look like rings, as seen in this image from NASA’s James Webb Space Telescope. Each ring was created when the stars came close together and their stellar winds collided, compressing the gas and forming dust.
Credit: NASA, ESA, CSA, STScI, JPL-Caltech

What captured Lau’s interest was that several of these stars can actually be observed changing on human timescales — a phenomenon known as time-domain astronomy. This is rare in astronomy, which deals with timescales so grand that, for humans, the sky and its stars look mostly unchanged year after year.

Time-domain astronomy, which includes WR stars, produces dynamic and captivating visuals. In particular, WR stars that are part of a binary star system create often-intricate patterns of dust as the strong stellar winds from the orbiting stars clash, causing atoms of carbon and oxygen to fuse into microscopic dust grains.

Ryan Lau, an astronomer at NSF’s NOIRLab, has led some of the first observations with NASA’s JWST, finding at least 17 rings of dust emanating from a binary star system. The new data show that the dust is rich in carbon and seems to be surviving to seed space far beyond its parent star with heavy elements, meaning it could play a role in the formation of later stars and planets

It was one such system that Lau decided would make a good early target for the JWST. Known as WR 140, this binary contains a WR star that may have already shed more than half its original mass. WR 140 is a well-studied example of these colliding-wind dust-forming Wolf-Rayet binaries, and has been observed over decades at almost every wavelength, from X-rays to radio waves.

If we can understand this star, we can extrapolate that knowledge to understand other populations of these kinds of stars.

This means that astronomers today have a comprehensive archive of information to help them interpret new observations. “It’s like a prototype of these dust-forming systems,” Lau explained. “If we can understand this star, we can extrapolate that knowledge to understand other populations of these kinds of stars.”

Besides being a well-established model, WR 140 has a noticeable feature distinguishing it from other similar objects: a series of dust rings (not unlike waves spreading out from a stone hitting the surface of a pond) that appear to be emanating from it. These have been observed before, including by NOIRLab’s Gemini North telescope, which captured infrared images of a dust shell around WR 140 in 2003.

The system owes its distinctive rings to its peculiar orbit. Most WR binaries contain stars orbiting each other at a fairly constant distance, continually creating dust. But WR 140 has an elongated orbit in which the two stars periodically fly apart and back together again about once every eight years. It is only when they come close together that they generate a burst of dust, creating the pattern of concentric rings, each one corresponding to one orbital period.

This animation looks down from above the orbital plane to depict the spiralling creation of dust in the binary star system WR 140. A Wolf-Rayet star — the dense core of an ageing massive star — and an O-type star orbit one another, their stellar winds colliding as they get close. The intermixed stellar material blows back past the O star, forming dust as it cools.
Credit: NASA, ESA, Joseph Olmsted/STScI

Excitingly for astronomers, you can actually see that dust changing in appearance over time as it expands. This means that repeat observations are useful, especially when studied in combination with prior ones, such as those taken by Gemini North in 2003, because scientists can look at how a dust ring’s properties have changed from one snapshot to the next.

So in 2016 Lau assembled a group of similarly interested colleagues who developed and submitted a proposal to the JWST Early Release Science (ERS) program — a program designed to educate the scientific community about the telescope’s capabilities, with all data being made public immediately.

Lau tried not to get his hopes up, given how transformative this long-awaited telescope was going to be. Competition for observing time on well-established telescopes can be strong, but competition for observing time on the JWST would be monumental and given out to only the most compelling proposals. That just made it all the more exciting when he found out late in 2017 that his team was one of 13 selected. “It was a pretty surreal experience,” he recalled, “to be told that our proposal was accepted and we were going to get these observations — some of the first ones taken by JWST.”

After the initial buzz, it was a long wait while the JWST underwent many more checks before launch. But Lau found that the intervening years were invaluable, as they gave him and his team plenty of time to prepare and get their data-analysis software ready. “That’s partly why we could get the paper out so quickly,” he explained.

In July 2022, about five years after being selected, the team got their observations back, including the images of the nested dust shells. “I didn’t really understand what I was seeing at first,” Lau recalled, “because it looked really weird, almost like something messed up or as if there were some artifact causing these shells. But we had been studying it for the past five years and the patterns show that exact same structure, so after 10 seconds I was like ‘oh wow this has to be real.’”

Since WR stars are among the hottest and most luminous in the Universe, the environment around them is very hostile, so it was thought that the dust they form could be destroyed just as quickly. The JWST image, however, suggests that dust particles can survive their inhospitable nurseries and enrich their surroundings.

What caused Lau’s disbelief initially was the sheer number of shells visible. In previous observations of WR 140, the most that had ever been seen was two, and although the astronomers knew the JWST would see more than that, they weren’t prepared for just how many more. “We thought we would probably see around 8 dust shells,” said Lau. “But then we saw at least 17 — more than double what we expected. It really blew us away. It was amazing just to see how sensitive JWST is and also how evenly spaced the shells are.”

The new data contributed two new scientific insights into these stars and the role they play in the Universe. First, the spectroscopic data, which detect the wavelengths of light emitted by the dust, show that the rings are rich in carbon. This has been tricky to investigate before because of the difficulty in separating the light emitted by the dust from the central starlight.

But with the sensitivity and resolving power of the JWST, Lau and his team identified that the dust shells contain the signs of carbon molecules called polycyclic aromatic hydrocarbons. These molecules have been found in other stars before, but this has provided the most direct proof they are also seen in the dust from a Wolf-Rayet star.

Second, the large number of shells visible in the images show that these dust grains will survive to enrich the interstellar medium — an idea that had previously been doubted by other astronomers. Since WR stars are among the hottest and most luminous in the Universe, the environment around them is very hostile, so it was thought that the dust they form could be destroyed just as quickly. The JWST image, however, suggests that dust particles can survive their inhospitable nurseries and enrich their surroundings. 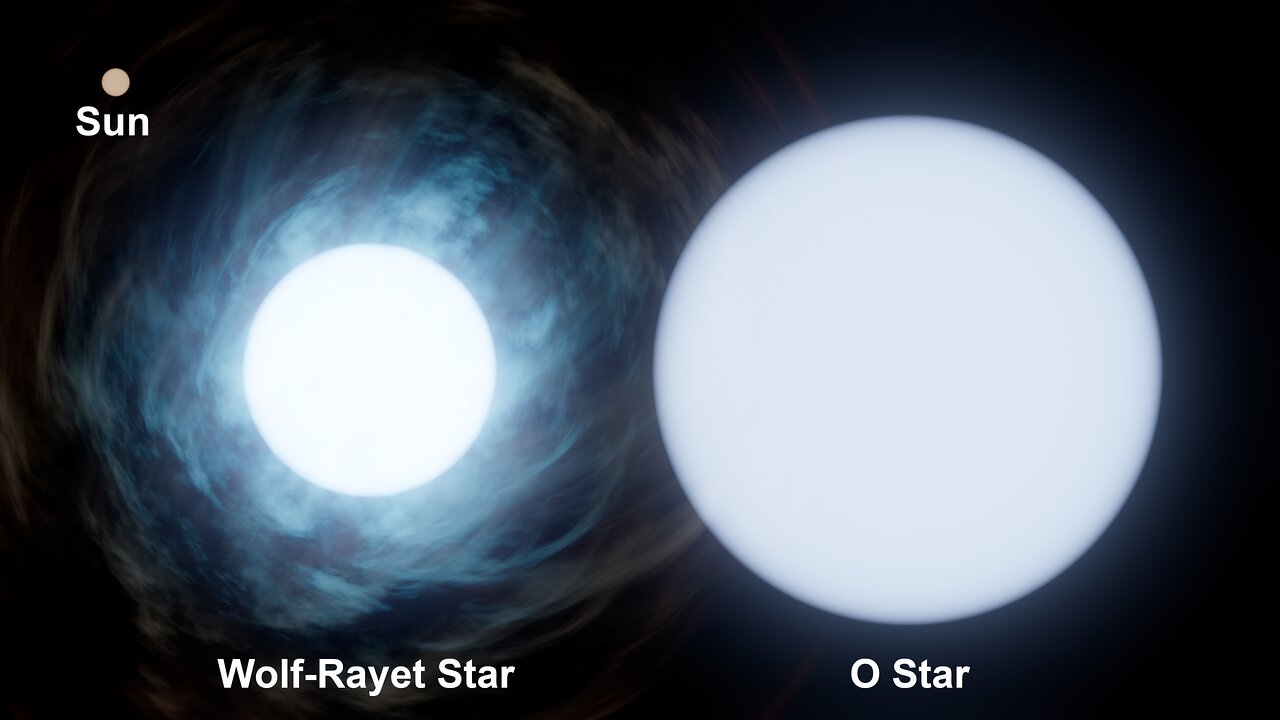 “Putting those two things together, it’s a nice confirmation that WR stars are a source of organic compounds that are important in the formation of later stars,” Lau explained. “The overall picture is that stars enrich the interstellar medium and that goes on to form later stars and planets. But actually understanding the exact sources of that enrichment is an open question. These observations show that WR stars should be taken seriously as sources of chemical enrichment.”

This alone is an important discovery, Lau noted, but there could yet be even more fascinating insights to emerge from the team’s JWST observing time. The team's first paper only looks at half of the data that they received back in July. Using another instrument on JWST, Lau and his colleagues also observed the inner dust-forming region around a different WR binary, and they are now processing that data and trying to comprehend what they’re seeing.

Beyond that, Lau says there is much more work to be done looking for other potential sources of chemical enrichment. He’s especially curious about the possibility that a wider range of stars — not just WR stars — are ejecting dust in a similar way. They just have yet to be found. “I’m interested in investigating other eruptive infrared sources,” he said, “and studying them with the JWST and with NOIRLab facilities.”

These future possibilities tie in with his work at NOIRLab, where part of his role is on the community engagement team for the upcoming Vera C. Rubin Observatory, set to achieve first light in 2024. This new observatory will be transformative in its ability to conduct deep surveys looking for transients and identifying the most interesting ones for further study, demonstrating the ongoing synergy between ground- and space-based astronomy.

While Lau is looking forward to seeing what else he finds in future observations, he will never forget being one of the very first people to look at the Universe with the JWST. “It’s amazing to think that you’re seeing something completely new,” he remarked. “This will be an experience that stays with me for my entire life.”

Laura Hiscott
Laura is a freelance science writer based in Bristol, UK. She has a background in physics and enjoys writing about astronomy and astrophysics.
NOIRLab Science
NOIRLab Science highlights the latest cutting-edge science done by NOIRLab astronomers. Find more interviews about NOIRLab research and observing facilities here on NOIRLab Stories.