NOIRLab’s telescopes are joining forces with the robotic telescope network of the Las Cumbres Observatory to simplify how observatories can quickly follow up on myriad transient events that go bump in the night, including asteroids and supernovae.

The Legacy Survey of Space and Time (LSST) is a 10-year project that will total 200 petabytes of data and take millions of images of the night sky looking for objects that flash or move (or both). At the heart of the survey is the LSST Camera, which is the largest digital camera ever built with a 3.2 gigapixel sensor. It can see down to magnitude 24.5 in a single 15-second exposure and will cover 18,000 square degrees of sky, producing 15 terabytes of data each night.

When NOIRLab’s Vera C. Rubin Observatory Program becomes fully operational over the next couple of years, it’s detailed survey of the entire night sky is going to find millions of transients each night — these are things that move, flash, brighten or appear for only a brief time, from asteroids and comets to flare stars, supernovae, active galactic nuclei and much more.

This is great news for astronomical discovery, but it has given telescope managers a fright as they wonder how on earth they can avoid being swamped by requests for follow-up observations of all these transients.

It might seem that astronomers will need aeons to follow up all these transients, but thanks to a partnership between NOIRLab and the Las Cumbres Observatory (LCO), they just need one AEON — an acronym for the Astronomical Event Observatory Network. 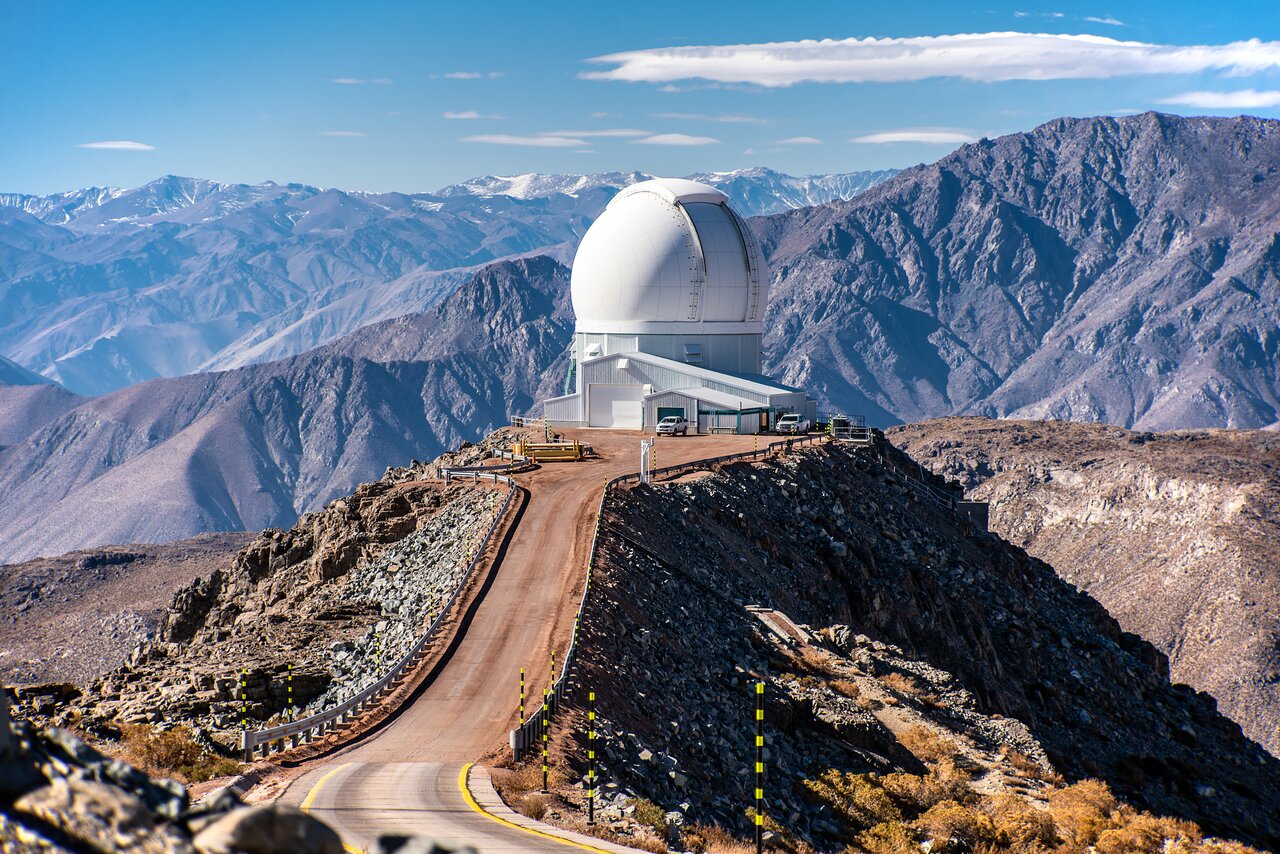 The SOAR telescope on Cerro Pachón has become part of the AEON network.
Credit: Chilean Ministry of Science, Technology, Knowledge and Innovation/NOIRLab/NSF/AURA.

“AEON came about as the result of a conversation between NOIRLab, the LCO, and the SOAR (Southern Astrophysical Research telescope), and Gemini observatories,” says LCO’s Rachel Street. “Telescope operators were concerned that astronomers would submit an unsustainable number of request for follow-ups of discovery alerts from Rubin, as many as ten million per night.”

AEON acts to streamline the whole process by limiting or even removing the necessity for humans to be involved in each step, and is based on the system operated by the LCO, which is a network of 18 telescopes spread around the world that specialize in observing transients and conducting what is known as time-domain astronomy. Part of LCO is hosted at NOIRLab’s Cerro Tololo Inter-American Observatory, Chile, at an altitude of 2163 meters (7096 feet). 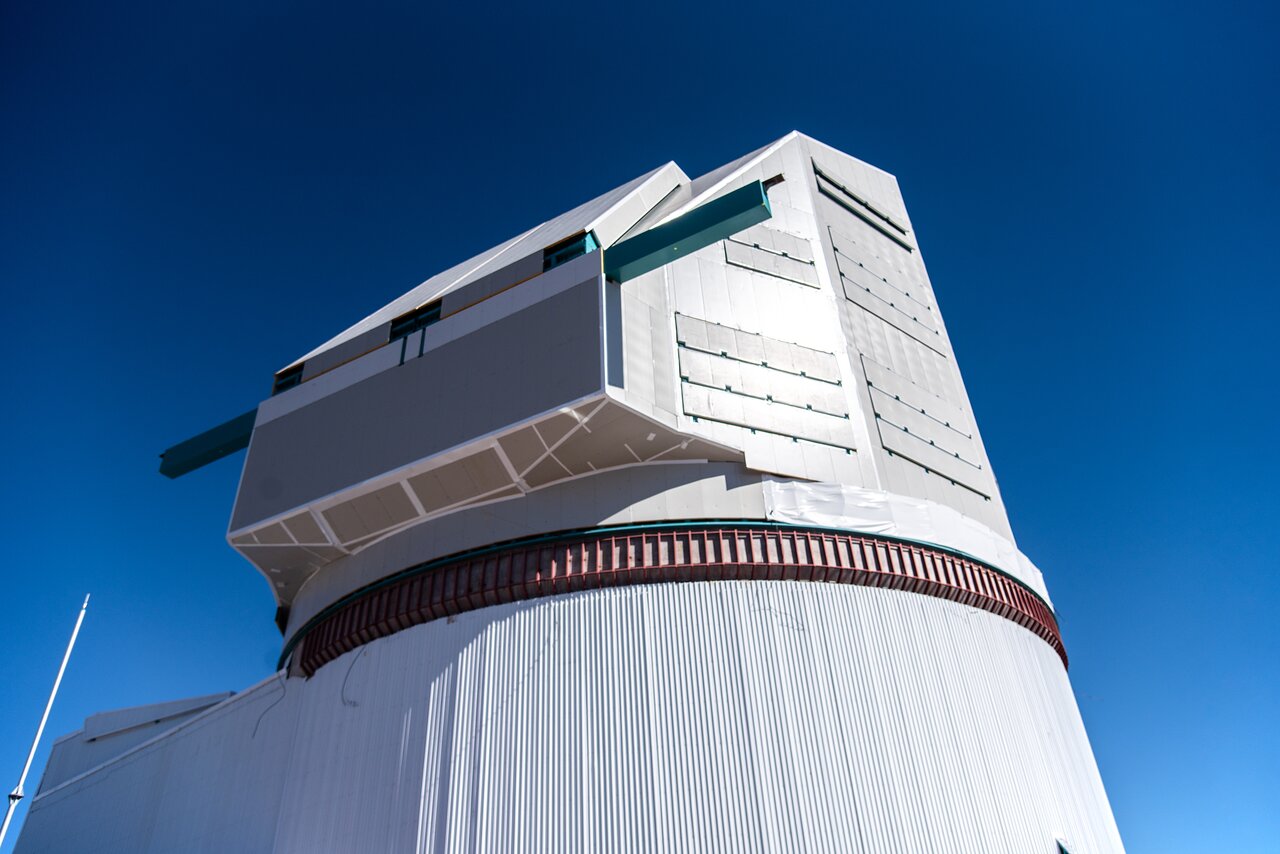 The Vera C. Rubin Observatory is expected to observe millions of transients each night.
Credit: Chilean Ministry of Science, Technology, Knowledge and Innovation/NOIRLab/NSF/AURA.

“Our telescopes are robotic, and are designed to get data a few minutes after the submission of a target,” says LCO’s Andy Howell. This is especially important when observing supernovae, kilonovae or gamma-ray burst afterglows, where getting data as early as possible after detection is crucial to figuring out the physical mechanisms involved in those explosions.

The new AEON system, says Howell, “takes humans – the slow step – out of the loop, meaning that we can get data almost immediately, and we can get it 24 hours a day.

NOIRLab’s largest telescopes are not robotic, however — humans are still needed to plan and monitor queue mode observations on them. Queue observations are submitted by astronomers and are ordered based on a number of factors, from visibility in the sky, weather, importance and availability of the right instrument. When something is discovered that needs quick follow up, this can be inserted into the queue as soon as possible, including interrupting ongoing observations, but this requires astronomers at the observatory to spend hours rejigging their schedules. When the Rubin data floodgates open, this will become an almost impossible task.

Hence AEON, which automates the whole process using an Application Programming Interface (API) and programs called Telescope Observation Managers. These programs have been used for years by the LCO telescopes, but had to be adapted for use on SOAR and Gemini.

“The first stage was to overhaul the software language we provide in order to describe their observations to AEON,” says LCO’s Software Engineering Manager, Mark Bowman. “Once we were equipped with this updated language, we extended the LCO robotic network to incorporate SOAR when running in AEON mode.”

The API allows users to interface with the telescope using a Telescope Observation Manager, which Howell describes as a “collaborative platform with a database of targets and observations. You can tell it that you want photometry every three days on a target, for example, and it will ask for that from an observatory’s scheduler program. The scheduler then dispatches the request to the telescope.” 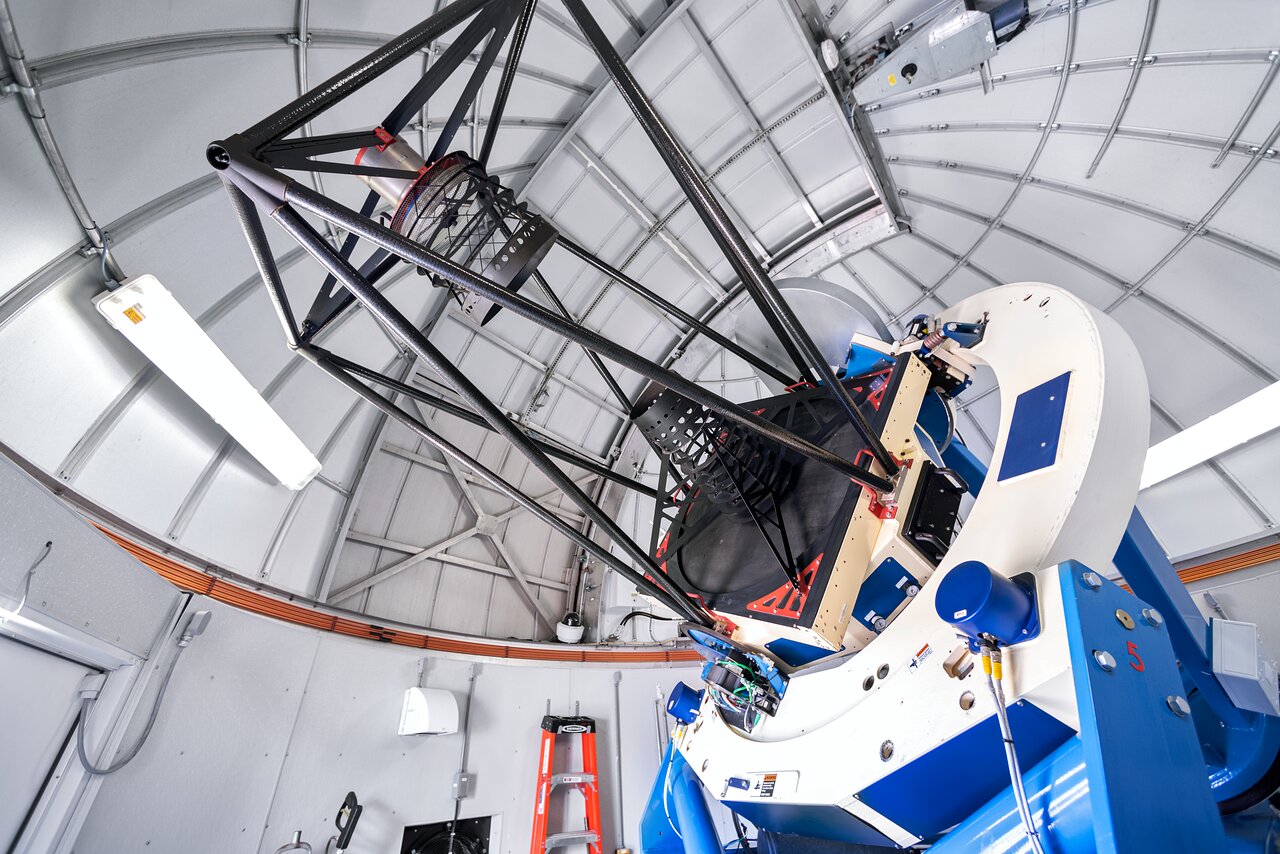 The old way of doing it required the astronomer requesting the observation to download software and fill in hundreds of elements in a form, which could take an hour or more, and then at the other end another astronomer at the observatory would have to double check, interpret and then schedule the request in the queue. The new AEON system, says Howell, “takes humans — the slow step — out of the loop, meaning that we can get data almost immediately, and we can get it 24 hours a day.”

NOIRLab facilities were incorporated into AEON in 2019. SOAR’s Goodman spectrograph was successfully operated in AEON mode, fed by the Las Cumbres automatic scheduler, for 20 nights. SOAR is a multinational consortium and not all member nations are focused on time-domain and queue observations. Hence, SOAR’s queue nights when AEON can operate are intermittent, and it does longer, uninterrupted observations on other nights. Gemini Observatory adapted an existing API so that observations for both Gemini telescopes could be requested via scripts or other tools used for time-domain astronomy such as Target Observation Managers. Gemini operates in queue mode most of the time, so it can accept target-of-opportunity observations on the majority of nights without impacting the non-time-domain science. Gemini is also in the midst of major operations software upgrades that will provide a web-based user interface, AEON-compatible and full-featured APIs, and an automated scheduler.

Both SOAR’s 4.1-m telescope and the Gemini South 8-m telescope are perfectly placed to follow-up on Rubin’s discoveries.

Both SOAR’s 4.1-m telescope and the Gemini South 8-m telescope are perfectly placed to follow-up on Rubin’s discoveries because all three facilities are co-located on Cerro Pachón. Therefore, both SOAR and Gemini South can cover the full Rubin survey area. Gemini North, located on Maunakea in Hawai’i, also covers a large fraction of the Rubin survey “footprint” and the six hour time difference with respect to Chile can be useful for continuing to follow up changing targets. The addition of more facilities to AEON will increase the amount of queue/AEON time available for follow-up and improve the time coverage of sources. In a couple of years, as the Rubin Observatory begins survey operations, we hope that NOIRLab’s Víctor M. Blanco Telescope at Cerro Tololo Inter-American Observatory will be operating within the AEON system. Other facilities have also expressed interest in joining. 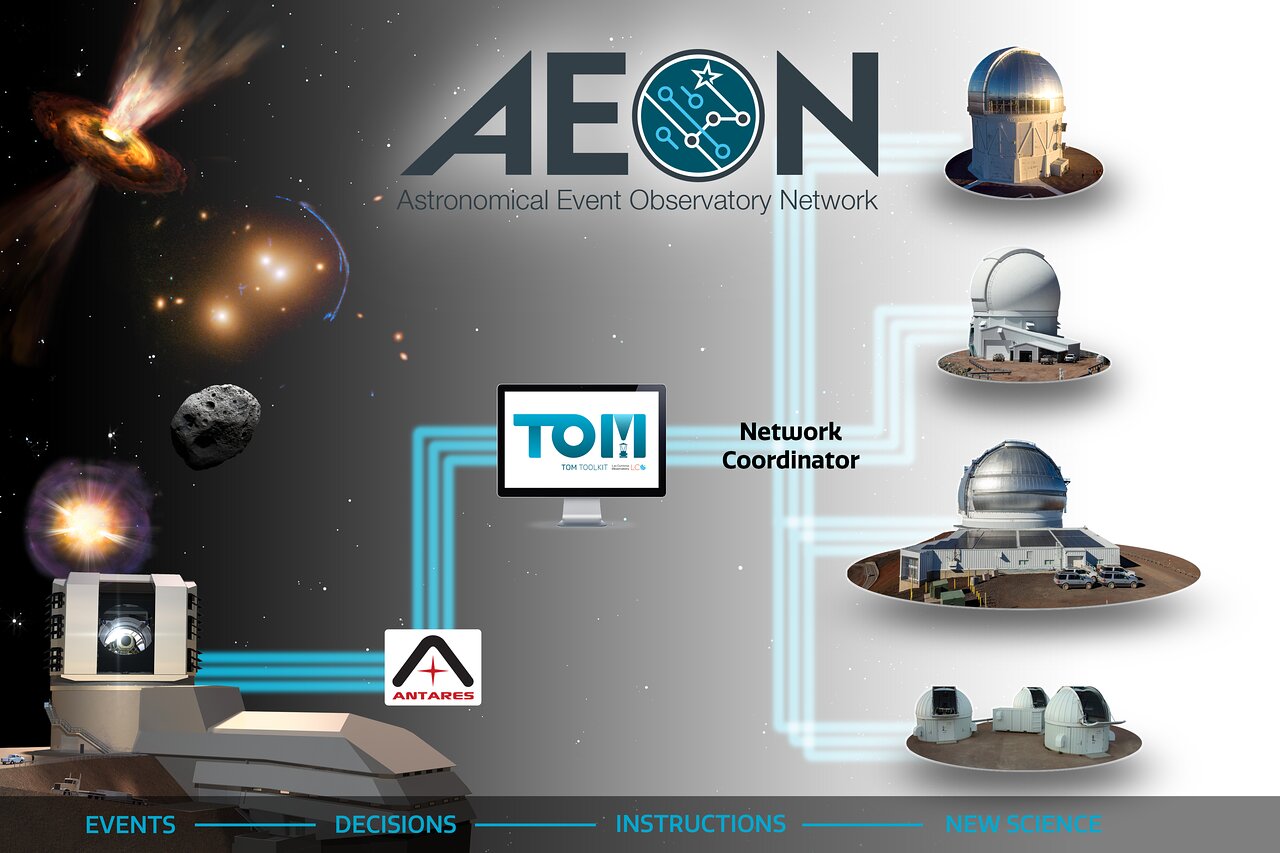 The AEON network pipeline. The Vera C. Rubin Observatory will detect millions of transients, which will be sorted into different categories by NOIRLab’s ANTARES software. Telescope Observation Managers will then go in and pick out transients from these categories that astronomers are looking for, and send alerts to follow-up telescopes running the AEON software.
Credit: NOIRLab/NSF/AURA/P. Marenfeld.

Howell sees this automated approach as the key to making the most of the deluge of alerts that Rubin will deliver each night. “It opens new windows of science,” he says, “And there will be many new discoveries as a result.”

Gemma Lavender
Gemma is the Editor for NOIRLab Stories as well as an Editor-in-Chief of Science at Future Plc in the UK. She has a background in astrophysics, and is currently carrying out research in Physics Education at Cardiff University.
From the Ground Up
Lets you discover the operations of NOIRLab’s sites, facilities, and advanced ground-based telescopes.