When does it take place: At the teacher's convenience

Who can attend: All high-school students

How much does it cost to attend: Free

How can I take part: Talk with your teacher or register for occasional events at www.teenastronomycafe.org

NOIRLab’s Connie Walker, the long-time force behind the Teen Astronomy Café program in Tucson, has helped to lead the development of an exciting online version of the program Teen Astronomy Café — To Go. Whether in-person, or To Go, the program gives teenagers the chance to use real data and experience the work of a research scientist.

NOIRLab is committed to education and engagement and supports a diverse portfolio of outreach and education activities. These include AstroDay, which promotes science and the astronomy done by NOIRLab’s telescopes in Chile, Project Astro which is in partnership with the Astronomical Society of the Pacific and connects astronomers with teachers and families to support STEM education, Journey Through the Universe, Hawai‘i Island’s leading astronomy education and outreach program, and Globe at Night, which is also run by Connie Walker and raises public awareness of light pollution by encouraging citizen scientists to measure how bright the night sky where they live is, and submit their readings using their smartphone.

All around the world, a new phenomenon in astronomical educational outreach is taking hold. High-school students converge for Teen Science Cafés, where, over coffee and cake (or pizza!), they get to speak to and learn from professional scientists who provide workshops that prepare and inspire students to continue studying science or engineering at university.

Since 2017 the Teen Astronomy Café concept has been implemented in Tucson with the help of current NOIRLab staff, students, and local educators. With that success as a backdrop, an online version, called Teen Astronomy Café — To Go will soon be released to the world. This version will allow educators, and anyone with an interest in exploring astronomical data, and topics ranging from exoplanets to black holes, to join in the thrill of astronomical discovery.

The concept of Science Cafés began in the United Kingdom; they were aimed at adults (often taking place in a pub!), but in 2007 they were first adapted for teenagers by the Café Scientifique New Mexico. Since then, Teen Science Cafés have taken place all across the world, and there’s now an online network that allows students to find their nearest science cafés.

Since 2016, NOIRLab astronomer Connie Walker has led a Teen Astronomy Café, where high-school students get to engage with STEM experts and NOIRLab’s astronomers over food and drink in an informal, out-of-school setting

Since 2016, NOIRLab astronomer Connie Walker has led a Teen Astronomy Café, where high-school students engage with STEM experts and NOIRLab’s astronomers over food and beverages in an informal, out-of-school setting. During these events, students are encouraged to get involved and ask questions in out-of-this-world discussions encompassing topics such as the birth and death of stars, dark energy and dark matter, colliding galaxies, and more.

The funding for the cafés was seeded by the LSST Corporation, which oversees Vera C. Rubin Observatory, and astronomers from Rubin are frequently involved with the cafés. Walker submitted the funding application in 2016. 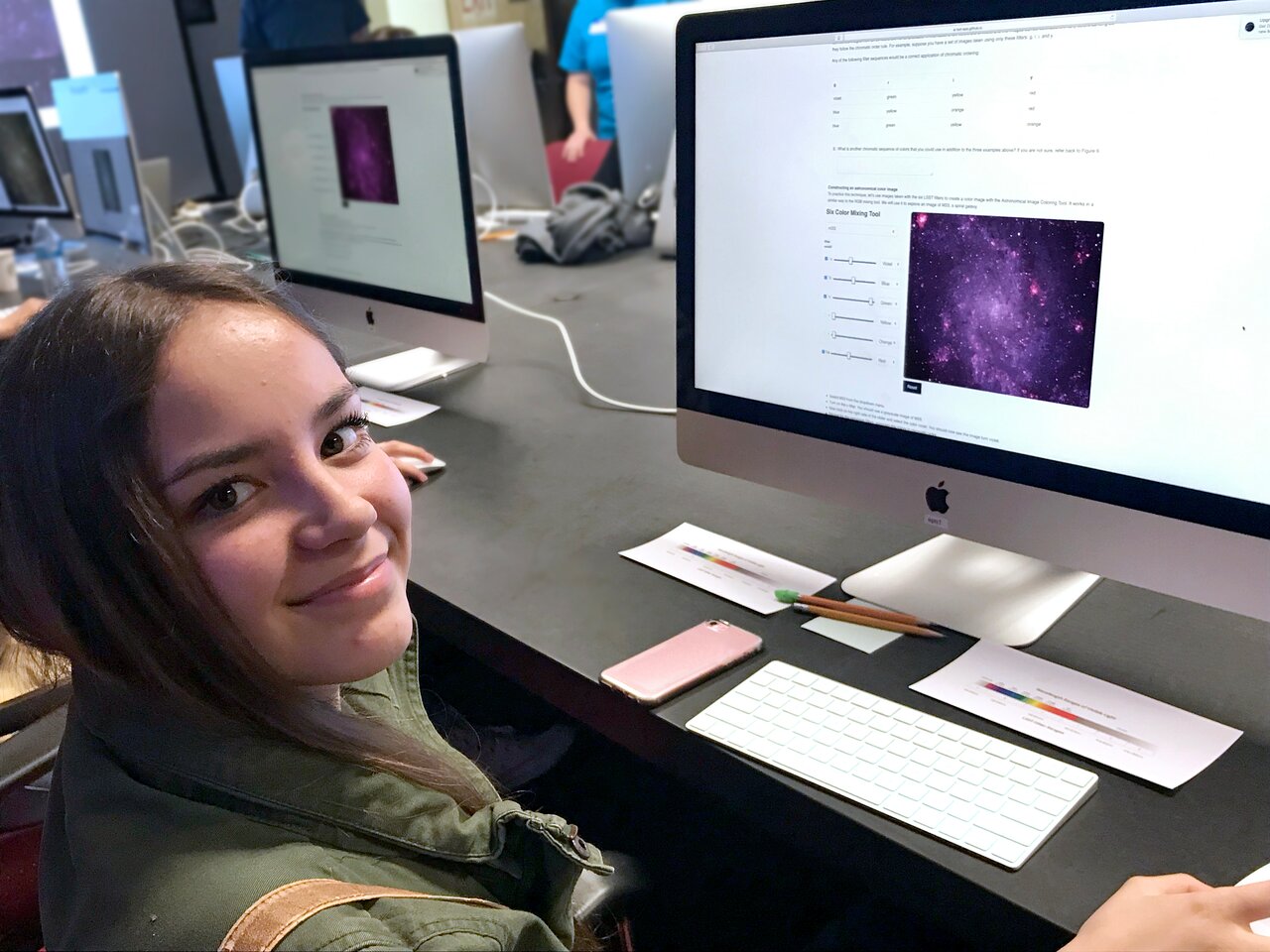 A local high-school student gets stuck into an online project at the Teen Astronomy Café
Credit: NOIRLab/NSF/AURA

“We originally called it the Big Data Academy, but would teenagers know what ‘big data’ meant?” she says. “So we changed it to the Teen Astronomy Café and held our first one in January 2017. I direct the program and make sure that everything is planned and put together and executed well.”

While Walker and a group of graduate students oversee the cafés, vital assistance comes from the teens themselves, from whom a group of youth leaders are selected. Each year, through interviews, Walker selects five or six teenagers to help run the cafés, and act as intermediaries between the other high-school students taking part and Walker and her team of astronomers. In turn, this teaches the youth leaders leadership skills, as well as giving them even greater insight into the work of professional astronomers.

Indeed, many of the students have gone on to study a STEM subject at university. “There’s a couple right now at Cornell, and another at the University of Arizona, majoring in astronomy and physics,” says Walker. “They’ve talked about how the cafés affected their lives and represented a turning point in helping them decide they would do astronomy or another science or engineering in the future. It gave them a launch point.”

The youth leaders were needed as never before when the COVID pandemic struck in 2020. Suddenly the in-person cafés and pizza had to stop, and the entire program moved online. It fell to the youth leaders to become an even stronger conduit between their fellow high-school students and Walker, by leading break-out rooms on Zoom and encouraging their classmates to ask questions in front of others in the online environment, rather than one-to-one in in-person meetings.

“The youth leaders became more important as time went on,” says Walker. “It was a wonderful opportunity to have them take the lead in getting the other students in their breakout rooms and to participate in the activity. The role of the undergrad lead or student intern has also been very important. That person was my righthand person, they did as much as they could in the ten hours a week in which they helped: they oversaw the emails and almost anything to do with organizing the cafés.” 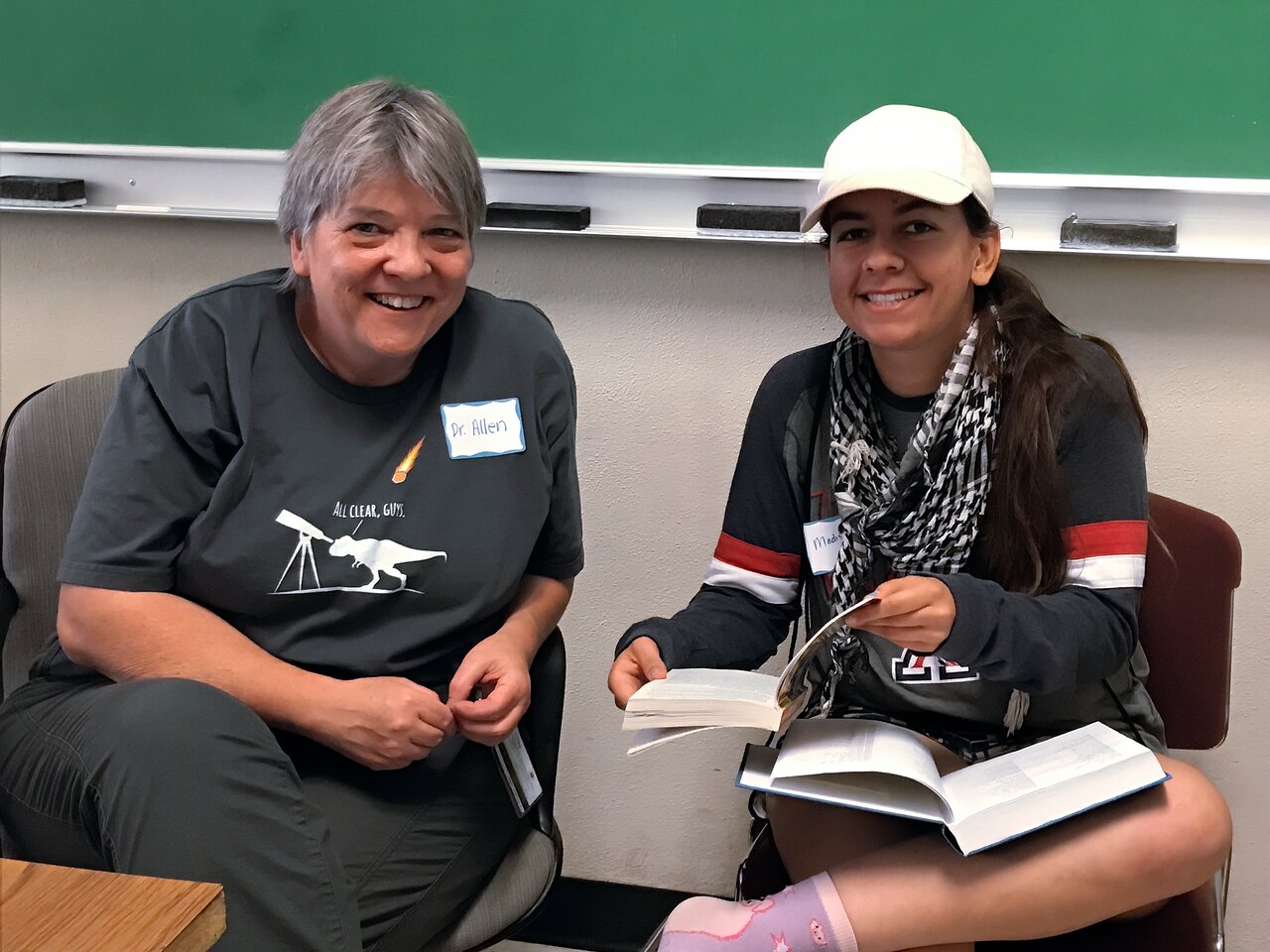 NOIRLab’s Dr Lori Allen (left), Associate Director of Kitt Peak Observatory, giving up some of her time to work with high-school students at a Teen Astronomy Café
Credit: NOIRLab/NSF/AURA

With the shift to an online program has come a greater emphasis on activities that can be conducted using computers, and it was decided to upgrade the program to a fully online setup as Teen Astronomy Café — To Go! Teen Astronomy Café — To Go! uses Python, which is a popular programming language used in simple browser applications called Python Notebooks. In these the cells and parameters are pre-set, so as not to throw the students in at the deep end straightaway. They accommodate differing skill levels so that the students do not require any pre-existing knowledge of the software.

Diversity is an important part of NOIRLab’s Teen Astronomy Café program. “Right now, over 50% of our students are from underperforming schools, and over 50% are women,” says Walker. And while NOIRLab’s Teen Astronomy Café began in Tucson, NOIRLab’s other locations are now beginning to run their own cafés — online to begin with, because of COVID considerations — with the first one held by Hawai‘i astronomers last December, and the first has already taken place in Chile in June 2022 (to synchronize with the school calendar).

Diversity is an important part of NOIRLab’s Teen Astronomy Café program. “Right now, over 50% of our students are from underperforming schools, and over 50% are women,” says Walker.

Each student who attends the cafés takes a huge amount of confidence and direction away with them, inspiring them to further pursue a career in the sciences. But for Walker and her team of participating astronomers, there are also rewards in seeing their teenage students become so engaged by the astronomical topics.

“It’s seeing the light bulbs go off in their heads,” says Walker. “They get all excited, and then they start asking questions, and sometimes they don’t stop asking questions! That occurred mostly when it was in-person, but still there will be online cafés that go beyond the two hours that they are supposed to last.” 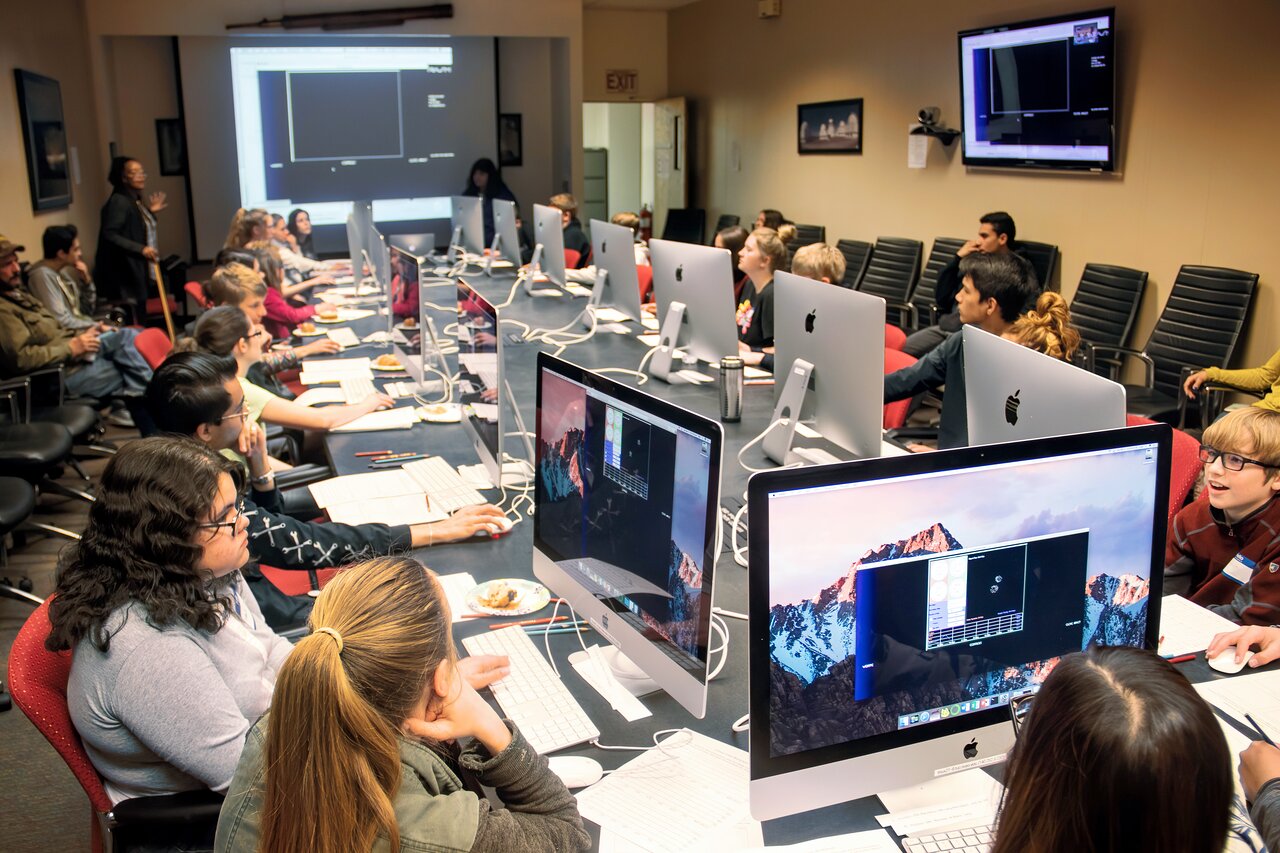 The Teen Astronomy Cafes, when run in person outside of the pandemic, are a great way to get high-school students and professional astronomer mentors around the table working together
Credit: NOIRLab/NSF/AURA

Ultimately, the Teen Astronomy Café serves as a gateway to inspire students to get interested in astronomy, providing them with a different experience during each meeting. If that happens, Walker believes that the cafés will have played a significant role.

“This is just whetting their appetite,” says Walker. “It’s about getting their toe in the door and letting them sample what it’s like to do research in a certain area.”

You can find out more about NOIRLab’s Teen Astronomy Café — To Go! here.

Gemma Lavender
Gemma is the Editor for NOIRLab Stories as well as an Editor-in-Chief of Science at Future Plc in the UK. She has a background in astrophysics, and is currently carrying out research in Physics Education at Cardiff University.
EPO@NOIRLab
Goes behind the scenes of NOIRLab’s EPO efforts, including NOIRLab’s public events and updates on NOIRLab’s science communication. Explore how NOIRLab’s science and technology connects to people’s lives and permeates society and culture.