Letizia Stanghellini, an astronomer at NSF’s NOIRLab and an expert in planetary nebulae, has collaborated with scientists across the world to analyze the first observations of a planetary nebula made with NASA’s James Webb Space Telescope. The extraordinary new details reveal that there are two, possibly three, more previously unseen stars that have crafted the oblong, curvy shapes of the Southern Ring Nebula.

From our vantage point on Earth, the Universe can seem like a serene place. The distant stars turn reliably through the sky each night and telescopes usually capture images of celestial objects seemingly frozen in time. But these tranquil snapshots often belie a maelstrom of activity, from collisions to explosions to fierce gravitational tugs of war.

Decades of technological advances in telescope and instrumentation design have brought clearer and more detailed images of the truly chaotic nature of the Universe. 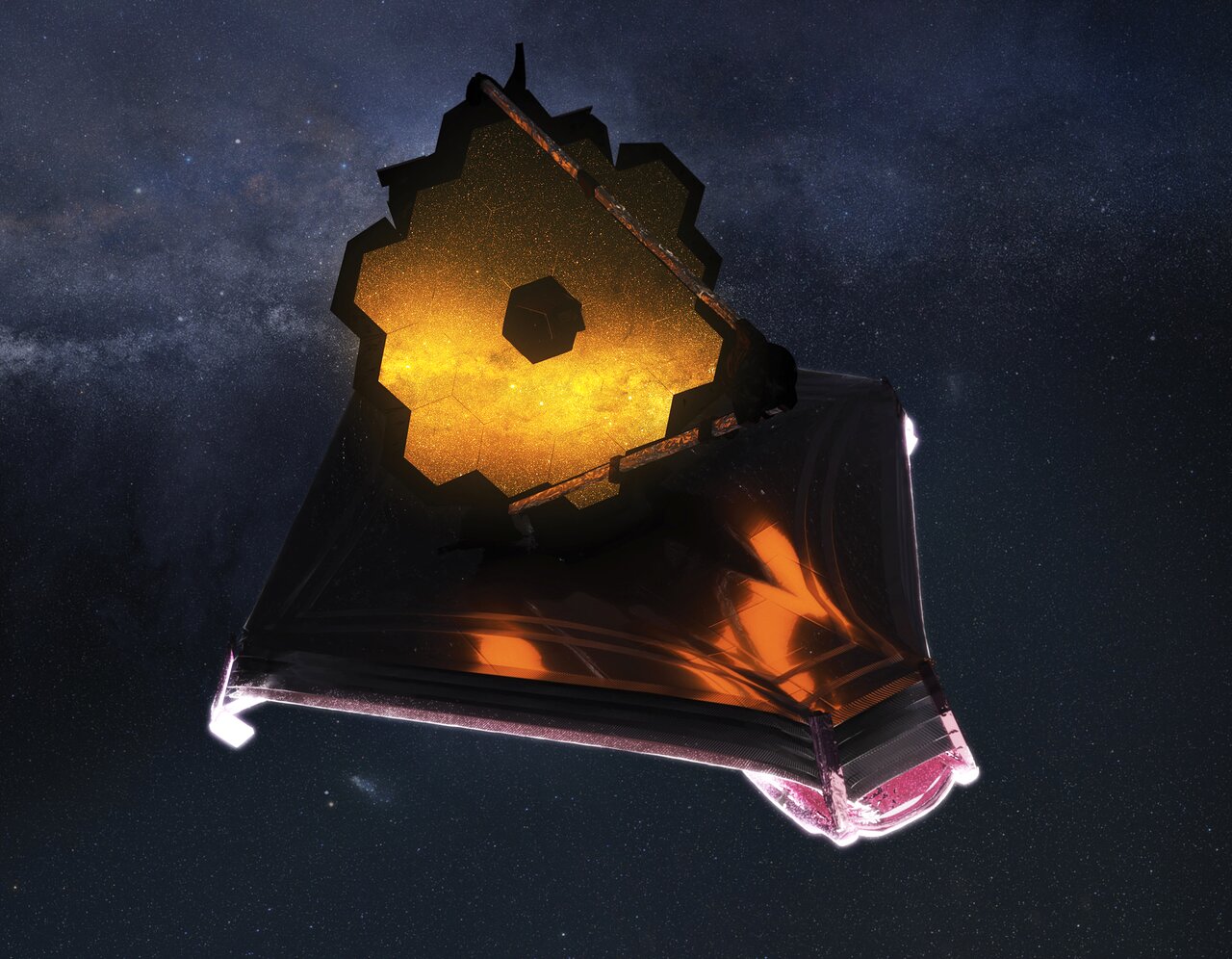 A case in point is the planetary nebula NGC 3132, also known as the Southern Ring Nebula, which lies about 2000 light-years from us in the constellation Vela. It is a well-studied object and previous observations have revealed that it contains a binary star system surrounded by glowing clouds that are gradually being shed by one of the stars as it progresses toward the end of its natural lifecycle.

Earlier this year, however, the James Webb Space Telescope (JWST) imaged this nebula in more detail than ever before. What the astronomers discovered was not the gradual and seemingly elegant aging of a star.

The new observations told a more violent origin story, with more actors in the mix than previously known.

This is the subject of a new paper published today in Nature Astronomy, and co-authored by Letizia Stanghellini, an astronomer with NSF’s NOIRLab who specializes in planetary nebulae.

The term planetary nebula is actually a misnomer; these nebulae have nothing to do with planets. Their name is a linguistic oddity that dates back to the late 1700s when famed English astronomer William Herschel described certain nebulae as resembling planets. The Ring Nebula (M57, not to be confused with the Southern Ring Nebula) was described by French astronomer Antoine Darquier de Pellepoix as being as “large as Jupiter and resembles a fading planet.” Though later observations revealed the true nature of these evocative cosmic objects, the old term still endures in the astronomy lexicon.

Planetary nebulae are actually a late evolutionary stage in the life of stars between about one and eight solar masses. They’re created when a burgeoning red-giant star sloughs off its outer lays of gas into space. The powerful ultraviolet radiation emitted by the dying star ionizes the gas, causing it to fluoresce in different colors and making these phenomena some of the most beautiful occupants of the night sky. What’s more, they are key to understanding the evolution of the cosmos and how it can produce life.

“In each stellar population you have many more low-mass than high-mass stars,” explains Stanghellini. “So there are many more stars that go through the planetary nebula phase than through supernova ejection. It’s important not only because it’s common but also because of the nucleosynthesis that goes on inside the stars. While supernovae and high-mass stars produce most of the heavy elements, the low-mass stars that go through the planetary nebula phase produce most of the nitrogen and at least half of the carbon in the Universe. And we are made of carbon.”

The planetary nebula phase may last tens of thousands of years, but that is merely the blink of an eye in the lifetime of a star, which will have been burning away for billions of years up to that point.

This is why astronomers have only spotted a few thousand planetary nebulae in the Galaxy, despite its containing hundreds of billions of stars.

Animation of the James Webb Space Telescope as it eclipses the Sun as seen from the camera's viewpoint.
Credit: NASA, ESA, CSA

Out of these few thousand, the Southern Ring Nebula was selected as one of five targets — and the only planetary nebula — to be observed during the JWST’s Early Release Observations (ERO). This program was designed to test and showcase the new telescope’s capabilities and, when the data were published on 12 July of this year, it did not disappoint.

“I’ve been studying planetary nebulae since I was an undergrad,” says Stanghellini, “so every time there was a major breakthrough from instruments, there was that ‘wow’ moment, like with the first spectra from Gemini and Spitzer, and the first images from Hubble for sure. Each of these big major observatories has made me think ‘wow, planetary nebulae are really the best!’ So I have had this feeling all through my career. I knew quite a bit about the JWST and also there were a lot of simulations, so we knew that we were going to see great things. But I was still pretty impressed. They exceeded expectations in fact.”

Besides verifying the JWST’s extraordinary clarity, the images of the Southern Ring Nebula caught Stanghellini’s attention, and that of many other experts, for another reason: they contained some surprising new details, hinting at new information about the nebula’s past.

As the intrigued scientists began talking about it, they realized that a thorough analysis would require the teamwork of many astronomers specializing in various aspects of these objects. So a member of the International Astronomical Union’s (IAU) Commission on Planetary Nebulae suggested that the members start collaborating within that framework, and the president of the commission started an online chat dedicated to these discussions. Their collaboration resulted in the new Nature Astronomy paper, which has over 60 authors from around the world.

This represents a full-circle moment for Stanghellini, who actually established the commission in August 2015. Now a senior member of it, she is happy to see the community blossoming.

“I am particularly proud because I am the founder of the commission and I was the first president,” she says. “I think there was enough scattered interest in work on planetary nebulae, which are very interesting and important, but not a significant mass of astrophysicists studying them in each institute. So I think this is very interesting and it worked well. The current president has done a wonderful job to bring everybody together and the IAU has been thanked in the paper.”

So, delving deeper into the data, what did the scientists find? In previous images of the object, just one star was visible, nestled among the filaments of gas and dust. This visible star was known to be a companion of the star which had ejected the cloud — the remnant core of the progenitor star itself shines too dimly in visible wavelengths to be seen through the dust and gas. But in the images taken with the JWST, whose infrared vision can pierce through the outer bubble, a second point of light suddenly appeared that had not been seen before.

This discovery does much more than simply tell us that there is another object in the system; it could rewrite astronomers’ entire understanding of how the Southern Ring Nebula came to be.

Although all stars between one and eight solar masses are thought to eventually go through the planetary nebula phase, this event can be triggered early by a close interaction with another star.

Such an interaction would interrupt the fusion happening inside the progenitor, cutting short its production of elements like carbon, oxygen, and nitrogen. This scenario could also explain another observation: the spectra (taken by Spitzer) indicate lower abundances of carbon in the nebula than the central star would be expected to produce if it reached this phase naturally. For this reason, the new paper likens the Southern Ring Nebula to a crime scene, containing traces of evidence as to what might have caused the progenitor’s untimely demise.

Still more clues lie in the complex morphology of the object, with its pattern of radial spikes and outward-flowing ripples. Examining the boundary of the sparser inner cavity, the astronomers have found that its surface is bumpy rather than smooth. There are multiple possible causes for this, but each bulge seems to be paired with another directly opposite, suggesting that they may have been sculpted by polarized jets produced by the interacting close binary.

Fly-through movie of the inner cavity of NGC 3132 — Astronomers used the JWST data to construct a model of the Southern Ring Nebula’s inner cavity. They believe that the cavity’s bumpy surface could have been sculpted by jets produced in interactions between the progenitor star and up to two unseen close companions. The color-coding is for the Doppler shift as seen from Earth, with blue for material approaching the observer, red for receding gas, and green for no velocity along the observer’s line of sight.
Credit: NASA, ESA, CSA, and O. De Marco (Macquarie University); Wolfgang Steffen, Ilumbra

But these protuberances exist all over the surface, covering a much wider range than could be explained by jets from just two stars. So astronomers think there might even be another undetected star hiding in the dusty disk. Meanwhile, patterns further out suggest that yet another unseen star must be present, shaping the stellar winds streaming away from that chaotic center.

All in all, NGC 3132 might contain as many as five stars, depending on whether there are one or two close companions obscured in the dusty disk, and whether they have merged with the progenitor or not. This is an altogether more tumultuous picture of the nebula than was previously known, even by those most familiar with it, and Stanghellini is now keen to investigate more nearby planetary nebulae at the same level of detail.

“It isn’t possible to do it for all of them,” she explains, “but to have a benchmark of a few different types would be important. Each of these planetary nebulae is a small component of a population, which tells us a lot about the stellar population and the galaxy. When we observe planetary nebulae in other galaxies, which is my specialty, you cannot see these details because they are at least 60 times further away. But you need to know all the components of them, so this has been a good example. I think it would be important to have a sample of several different types nearby, to have as a tool to explore the rest of the Universe.”

Laura Hiscott
Laura is a freelance science writer based in Bristol, UK. She has a background in physics and enjoys writing about astronomy and astrophysics.
NOIRLab Science
NOIRLab Science highlights the latest cutting-edge science done by NOIRLab astronomers. Find more interviews about NOIRLab research and observing facilities here on NOIRLab Stories.