Call it the case of the missing dwarf. A team of stellar astronomers is engaged in an interstellar crime scene investigation. They have two suspects, traces of assault and battery, but no corpse. The southern planetary nebula SuWt 2 (seen in this color image taken with the 1.5-meter telescope at Cerro Tololo Inter-American Observatory in Chile) is the scene of the crime, some 6,500 light-years from Earth in the direction of the constellation Centaurus. 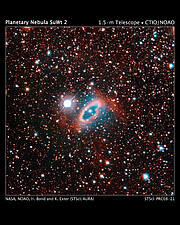