Astronomers have found evidence that stars have been forming in a long tail of gas that extends well outside its parent galaxy, using a combination of images in X-ray light from NASA's Chandra X-ray Observatory and optical light from the Southern Astrophysical Research (SOAR) telescope in Chile. This comet-like tail of newborn stars extends more than 200,000 light years, and suggests that such "orphan" stars may be much more prevalent than previously thought. For more, see Chandra Press Release. 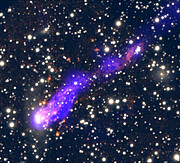