On November 8, 2006, starting at 12:12 p.m. local MST in Tucson, Arizona, the planet Mercury began its transit across the face of the Sun, as seen from Earth. The National Science Foundation’s Kitt Peak National Observatory and the Exploratorium joined forces to present a live view of the 5 hour transit both on the mountain and via webcast. 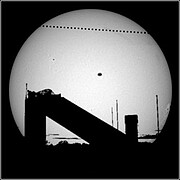