A Spectacular Show From A Convulsing Massive Star

New high-resolution measurements of the famous massive star Eta Carinae using the NOAO-built Phoenix infrared spectrograph on Gemini South show that the star's bipolar nebula is the result of an aspherical explosion during its mid-19th century outburst, as opposed to the nebula being “pinched” by surrounding material. 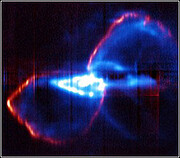