Gemini Detects Something "Cool" in Our Neighborhood

While searching for planet-sized bodies that might accompany the nearby star system Epsilon Indi, astronomers using the Gemini South telescope in Chile made a related but unexpected detection. The nearest known specimen of a brown dwarf, Epsilon Indi B (now Ba), has a cooler and less massive companion: Epsilon Indi Bb. This discovery was made with the NOAO-built PHOENIX high-resolution spectrometer, using a narrow-band filter within the J-band, and without the aid of adaptive optics. The separation between Epsilon Indi Ba and Bb is 0.7 arcsecond. 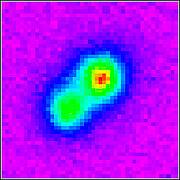 PR Image noaoann03015a
Gemini Detects Something "Cool" in Our Neighborhood