This planet has captured the public’s imagination like no other in our solar system. As it nears its closest approach to Earth in some 60,000 years, Mars offers observers spectacular views such as this one taken on August 3, 2003 at the Kitt Peak Visitor Center 20-inch telescope. 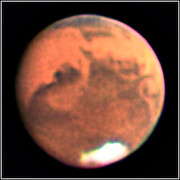