Every galaxy has a story, and every galaxy has been many others in the past (unlike for humans, this is not purely metaphorical, as galaxies grow via hierarchical assembly). Generally speaking, the most massive galaxies have led the most interesting lives, often within teeming galactic metropolises where they are subject to frequent interactions with assorted neighbors. These interactions influence the structure and motions of the stars, gas, and dark matter that make up the galaxies. They also affect the growth of the supermassive black holes at the galaxies’ centers.

Although the detailed life stories of most galaxies will remain forever uncertain, the key thematic elements may be surmised in various ways. A particularly powerful probe of a galaxy’s dynamical structure is called integral field spectroscopy (IFS), which dissects a galaxy’s light at each point within the spectrograph’s field of view. In this way, it is possible to construct a map of the motions of the stars within the galaxy and infer the distribution of the mass, both visible and invisible. IFS observations of the outskirts of a galaxy can provide insight into its global dynamics and past interactions, while IFS data on the innermost region can measure the mass of the supermassive black hole and the motions of the stars in its vicinity.

The MASSIVE Galaxy Survey, led by Chung-Pei Ma of the University of California, Berkeley, is a major effort to uncover the internal structures and formation histories of the most massive galaxies within 350 million light years of our Milky Way. A recent study by the MASSIVE team presents high angular resolution IFS observations of 20 high-mass galaxies obtained with GMOS at Gemini North, combined with wide-field IFS data on the same galaxies from the 2.7-meter telescope at McDonald Observatory in Texas. The study, led by Berkeley graduate student Irina Ene, appears in the June issue of The Astrophysical Journal.

The accompanying figure shows example maps of four indicators, or “moments” (called v, σ, h3 , and h4), of the stellar motions within two galaxies in the MASSIVE survey. The maps, based on the GMOS IFS data, cover the central regions of the galaxies. The figure also shows graphs of how these indicators vary with distance from the centers of these galaxies. Although both galaxies exhibit ordered central rotation, they are strikingly different in how the motions of the stars vary within the galaxy. Interestingly, for galaxies in the MASSIVE Survey, the directions of the motions of the stars in the central regions are often unaligned with the motions at large radius. This indicates complex and diverse merger histories.

As a proof of concept, the new study performs detailed dynamical modeling of the IFS data for NGC 1453, the galaxy in the sample with the fastest rotation rate. The team’s analysis reveals the amount of dark matter in this galaxy and shows how the shapes of the stars’ orbits change with radius. In addition, the team found an impressively large mass for the central black hole, more than three billion times the mass of our Sun. The MASSIVE Survey team is currently performing detailed modeling for all the rest of the galaxies in the sample. The results will provide further insight into the assembly histories of the largest galaxies in the local Universe and refine our understanding of the coevolution of galaxies and their central black holes up to the most extreme masses. 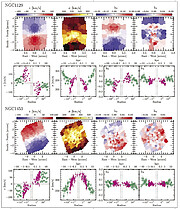