Is the Mystery of the Dark Matter Deficient Galaxy Resolved?

To have, or not to have dark matter? That is the question.

In early 2018, a team of researchers led by Pieter van Dokkum of Yale University shook up the astrophysics world when they announced that the dwarf, “ultra-diffuse galaxy,” which was referred to by van Dokkum as NGC 1052-DF2, is almost devoid of dark matter. Their report, published in the journal Nature, acknowledged that this conclusion depended on the distance to the galaxy. Nevertheless, the researchers presented evidence in favor of a distance that implied the galaxy was seriously light on dark matter.

The problem is that the formation of galaxies without dark matter doesn’t fit most theories of galaxy evolution. If van Dokkum and his team are correct then astrophysicists have some serious explaining to do. The original Gemini summary of the van Dokkum et al. work can be found here. The van Dokkum team has also published a follow-up study in the September 1, 2018, issue of The Astrophysical Journal Letters which supports their original distance to the galaxy.

In the spirit of healthy scientific debate, another team, led by Ignacio Trujillo of the Instituto de Astrofísica de Canarias, used the same data as van Dokkum (including key Gemini Observatory imaging) and concluded that van Dokkum et al. overestimated the distance of the galaxy. Trujillo’s team argue that the galaxy is actually only a little more than half of what van Dokkum’s team determined (13 vs. 20 Megaparsecs). If this is correct, then, according to Trujillo, it resets the amount of dark matter to a level typical for a dwarf galaxy.

It should be noted that Trujillo et al. use the original designation for the galaxy, KKS2000-04, because the distance they determined precludes an association with NGC 1052 as indicated by the van Dokkum designation.

At the core of this debate are some of the assumptions made, and techniques used, to estimate the galaxy’s distance and determine its mass. Trujillo argues that his team’s reassessment of the data, which used multiple methods to arrive at the galaxy’s closer distance, provides a more solid foundation for estimating the galaxy’s distance. "The convergence of all five different and independent methods of measuring the distance to this galaxy reinforces the result,” said Trujillo.

The new work by Trujillo et al. is published in the Monthly Notices of the Royal Astronomical Society and a press release issued by Instituto de Astrofísica de Canarias (IAC). The National Institute of Sciences of the Universe (INSU)–CNRS has a press release in French. A blog post discussion by Trujillo on measuring the distances to galaxies can be found here.

Undoubtedly this debate will continue, so stay tuned. 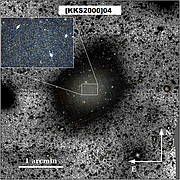