Extremely high-resolution speckle observations by Gemini South deliver critical details on a star (or stars) lying in the apparent path of remnants from the early formation of our Solar System.

In early March of 2017 the outer Solar System object Orcus, and its one known satellite Vanth, were on an apparent collision course with a star – at least that’s the way it appeared from our perspective on Earth. Original calculations showed that Orcus would pass in front of a relatively bright star and temporarily block the star’s light. However, later refinements to the calculations revealed that the shadow of Vanth would trace a path across the Earth’s surface.

These events, known as occultations, are only visible from a thin swath on Earth’s surface and calculations have small uncertainties due to observations of the orbits and estimates of the objects’ size. But even with these uncertainties, what happened surprised astronomers.

Because of these uncertainties observations were conducted by five telescopes distributed geographically to be sure to catch the event. While neither of the Gemini telescopes were scheduled to observe the occultation, Gemini was called into action when the coordinated observations detected two separate, non-simultaneous occultations by widely separated telescopes. The detections were made by the NASA Infrared Telescope Facility on Maunakea, and the Las Cumbres 1-meter telescope at the McDonald Observatory in Texas.

Based on the observations, and earlier Hubble Space Telescope observations, the team ruled out the possibility of another yet-undiscovered satellite. The separation of the events also precluded Vanth or Orcus from being responsible for both occultations.

Following the recommendation of an external reviewer of the submitted paper on the work, team member Amanda Bosh of the Massachusetts Institute of Technology asked for Fast Turnaround time on the Gemini South telescope in Chile. These observations would scrutinize the star in extremely high resolution and look for a yet unseen companion which could explain the double occultation. A visiting instrument, called the Differential Speckle Survey Instrument (DSSI), would be used due to its powerful ability to resolve stars in exquisite detail.

DSSI uses a technique called “speckle imaging,” which takes thousands of very quick exposures that can capture fine details, including artifacts due to atmospheric blurring. By averaging out the effects of the ever-changing atmospheric turbulence, what remains is an ultra-sharp image of the stars in the field. When this technique was applied to the target star for this occultation, the result was clear: the star was a double and separated by only 250 milliarcseconds from each other (comparable to separating two automobile headlamps from approximately 600 miles, or 1,000 kilometers, away). Furthermore, the alignment of the star pair fit the paths of the occultations, proving that Vanth was observed to occult the two different stars from the two different sites. Mystery solved!

“Without the high-resolution data provided by Gemini, we would not have been able to accurately determine which body occulted which star(s). Speckle imaging is a powerful technique, and it ensured correct interpretation of these stellar occultation data,” said Amanda Sickafoose, lead author on the published results.

Stellar occultations provide an extremely reliable way to determine the sizes of distant Solar System objects so these observations were critical in refining the size of Vanth. Amanda Sickafoose adds, “Occultations are extremely sensitive to atmospheres and our results place a limit of a few microbars for any possible global atmosphere on Vanth.” From other observations astronomers also estimate that Orcus has a diameter of about 900 kilometers and the new occultation measurements from this work show that Vanth’s diameter is about 450 kilometers which is almost double the previously estimated size. The pair are known as trans-Neptunian objects (TNOs) which are thought to be remnants from the formation of our Solar System. Orcus and Vanth orbit in the outer Solar System in resonance with Neptune and in an orbit similar to Pluto in distance from the Sun, but in a position about 180 degrees from Pluto relative to the Sun. “This is why the Orcus system is sometimes described as an ‘anti-Pluto’,” said Sickafoose.

DSSI has visited both Gemini telescopes several times, thanks to the instrument’s Principal Investigator (PI) Elliott Horch of Southern Connecticut State University. Based on the instrument’s success, two updated versions of DSSI are slated for Gemini, one on Gemini North (called ‘Alopeke, Hawaiian for fox, which is already in use), and at Gemini South (called Zorro, Spanish for fox, which is slated for installation in early 2019). Steve Howell of NASA’s Ames Research Center serves as PI for both of these new instruments.

The paper describing these observations was led by Amanda A. Sickafoose of the South African Astronomical Observatory and the Massachusetts Institute of Technology. The paper has been published in Icarus and the preprint is available here. 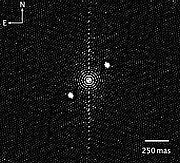