By measuring the brightness of about a dozen stars, lingering just outside of our galaxy, a team of astronomers believe they have solved a nearby intergalactic mystery. The researchers exposed the identities of three ultra-faint dwarf galaxy candidates using the Gemini South telescope. The team reports that the objects appear to be loose clusters of stars, not dwarf galaxies as some had previously believed. This finding has profound ramifications on the quantity of cold dark matter around our Milky Way and, by implication, other galaxies.

Using the Gemini Multi-Object Spectrograph (GMOS) at the Gemini South telescope in Chile, an international research team led by Dr. Blair C. Conn of the Australian National University studied three ultra-faint dwarf galaxy candidates, and found they were not as expected.

The three ultra-faint dwarf galaxy suspects, DES1, Eridanus III, and Tucana V, located in the vicinity of the Magellanic Clouds, were studied using a wide array of classification techniques. For each, fundamental properties including age, mass, luminosity, metallicity (ratio of heavier elements) and distance were determined. Based upon these parameters, the objects have instead been classified as star clusters.

While the brightness and metallicity are consistent with that of ultra-faint dwarf galaxies, their size and structure reveal their true nature. DES1 and Eri III are, according to the researchers, old, small, and highly elliptical stellar populations with very low metallicity. Tuc V displays a low-level excess of stars at various locations across the GMOS field without a well-defined center. This suggests that Tuc V is either a star cluster in a late stage of dissolution, or a grouping of stars associated with the Small Magellanic Cloud (SMC) halo.

Classification of these faint objects as star clusters implies that they are not dominated by dark matter, as dwarf galaxies typically are, “and so we are still trying to define ultra-faint dwarf galaxies. Where are these smallest galaxies, what are their properties and how many are there? Answering these questions will help complete the census of Milky Way satellites and let us understand the history of our galaxy.”, says Conn.

Conn and his team are looking into the “Missing Satellites” problem which was originally identified almost two decades ago. Based on what is called the hierarchical formation scenario, many astronomers expected a large number of dwarf satellite galaxies, each containing a high fraction of dark matter, surrounding larger galaxies like our Milky Way. However, too few such satellites have been found to account for the expected amounts of dark matter. Thus, classifying these ultra-faint objects is crucial to our understanding of dark matter in the Universe.

Watch for a feature article on this result in the April issue of GeminiFocus.

We use deep Gemini/GMOS-S g, r photometry to study the three ultra-faint dwarf galaxy candidates DES1, Eridanus III (Eri III), and Tucana V (Tuc V). Their total luminosities, M V (DES1) = -1.42 ± 0.50 and M V (Eri III) = -2.07 ± 0.50, and mean metallicities, [{Fe}/{{H}}]=-{2.38}-0.19+0.21 and [{Fe}/{{H}}]=-{2.40}-0.12+0.19, are consistent with them being ultra-faint dwarf galaxies, as they fall just outside the 1σ confidence band of the luminosity-metallicity relation for Milky Way satellite galaxies. However, their positions in the size-luminosity relation suggest that they are star clusters. Interestingly, DES1 and Eri III are at relatively large Galactocentric distances, with DES1 located at {D}{GC}=74+/- 4 {kpc} and Eri III at {D}{GC}=91+/- 4 {kpc}. In projection, both objects are in the tail of gaseous filaments trailing the Magellanic Clouds and have similar 3D separations from the Small Magellanic Cloud (SMC): {{∆ }}{D}{SMC,{DES}1}=31.7 kpc and {{∆ }}{D}{SMC,{Eri}{III}}=41.0 kpc, respectively. It is plausible that these stellar systems are metal-poor SMC satellites. Tuc V represents an interesting phenomenon in its own right. Our deep photometry at the nominal position of Tuc V reveals a low-level excess of stars at various locations across the GMOS field without a well-defined center. An SMC Northern Overdensity-like isochrone would be an adequate match to the Tuc V color-magnitude diagram, and the proximity to the SMC (12.°1 {{∆ }}{D}{SMC,{Tuc}{{V}}}=13 kpc) suggests that Tuc V is either a chance grouping of stars related to the SMC halo or a star cluster in an advanced stage of dissolution. 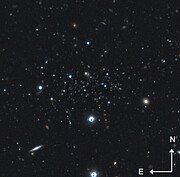