The Birth of Massive Stars Around an Unlikely Galaxy

Using the Gemini South telescope, researchers extracted spectra from extremely faint optical sources which they determined are nurseries of massive stars around an elliptical galaxy. Indeed, the sources were so faint that they were previously undetected and only revealed using ~4 hour exposures with the Gemini Multi-Object Spectrograph (GMOS). It is speculated that the nurseries formed as the result of a past galactic merger.

“The main result of our work is that we were able to detect all the clusters of massive stars around this elliptical galaxy,” said Urrutia. “Elliptical galaxies normally don’t have enough gas to form massive stars, thus we did not expect to observe star formation inside the galaxy, much less in its surroundings.”

The observed star-forming regions display a high quantity of heavier elements (metallicity), suggesting that these clusters were born from chemically enriched material from past generations of stars. “These high metallicities could be explained if the clusters were formed by the enriched gas coming from a merger event with at least one other spiral galaxy that formed NGC 2865,” adds Urrutia.

“The fate of these clusters is unclear, however. We cannot discard the possibility that these objects become globular clusters in the future,” adds team member Sergio Torres-Flores from Universidad de La Serena. Globular clusters are common in halos surrounding elliptical galaxies and this work could provide a glimpse into their early evolution.

The clusters studied, lying outside of the main galaxy, display low surface brightness in optical light and therefore can only be detected using a blind search like the MSIS technique used in this work. The six regions found by Urrutia et al. were revealed by hydrogen-alpha light emitted when surrounding gas is excited by high-energy radiation from the nearby young massive stars.

To learn more about this discovery and the techniques see the two papers in the journal Astronomy & Astrophysics which are available online.

Abstract from the technique paper

Tidal debris, which are rich in HI gas and formed in interacting and merging systems, are suitable laboratories to study star formation outside galaxies. Recently, several such systems were observed, which contained many young star forming regions outside the galaxies. In previous works, we have studied young star forming regions outside galaxies in different systems with optical and/or gaseous tidal debris, in order to understand how often they occur and in which type of environments. In this paper, we searched for star forming regions around the galaxy NGC 2865, a shell galaxy that is circled by a ring of HI with a total mass of 1.2 x 109 MSUN. Using the multi-slit imaging spectroscopy technique with the Gemini telescope, we detected all Hα emitting sources in the surroundings of the galaxy NGC 2865, down to a flux limit of 10−18 erg cm−2 s−1 Å−1. With the spectra information and the near and far-ultraviolet flux, we characterize the star formation rates, masses, ages, and metallicities for these HII regions. In total, we found 26 emission-line sources in a 60 x 60 Kpc field centered over the southeastern tail of the HI gas present around the galaxy NGC 2865. Out of the 26 Hα emitters, 19 are in the satellite galaxy FGCE 0745, and seven are intergalactic HII regions scattered over the south tail of the HI gas around NGC 2865. We found that the intergalactic HII regions are young (<200 Myr) with stellar masses in the range 4x103 MSUN to 17x106 MSUN. These are found in a region of low HI gas density, where the probability of forming stars is expected to be low. For one of the intergalactic HII regions, we estimated a solar oxygen abundance of 12 + log(O/H) ~ 8.7. We also were able to estimate the metallicity for the satellite galaxy FGCE 0745 to be 12 + log(O/H) ~ 8.0. Given these physical parameters, the intergalactic HII regions are consistent with young star forming regions (or clusters), which are born in situ outside the NGC 2865 galaxy from a pre-enriched gas removed from the host galaxies in a merger event. The relevance of these observations is discussed.

Abstract from the discovery confirmation paper

Context. Interacting galaxies surrounded by HI tidal debris are ideal sites for the study of young clusters and tidal galaxy formation. The process that triggers star formation in the low-density environments outside galaxies is still an open question. New clusters and galaxies of tidal origin are expected to have high metallicities for their luminosities. Spectroscopy of such objects is, however, at the limit of what can be done with existing 8 – 10 m class telescopes, which has prevented statistical studies of these objects.

Methods. We obtained new multi-slit spectroscopy of six young star-forming regions around NGC 2865, to determine their redshifts and metallicities. Results. The six emission-line regions are located 16 – 40 kpc from NGC 2865 and they have similar redshifts. They have ages of ~10 Myr and an average metallicity of 12 + log(O/H) ~8,6, suggesting a tidal origin for the regions. We note that they coincide with an extended Hi tail, which has projected density of NHI < 1019 cm-2, and displays a low surface brightness counterpart. These regions may represent the youngest of the three populations of star clusters already identified in NGC 2865.

Conclusions. The high, nearly-solar, oxygen abundances found for the six regions in the vicinity of NGC 2865 suggest that they were formed by pre-enriched material from the parent galaxy, from gas removed during the most recent major merger. Given the mass and the location of the HII regions, we can speculate that these young star-forming regions are potential precursors of globular clusters that will be part of the halo of NGC 2865 in the future. Our result supports the use of the multi-slit imaging spectroscopy as a useful tool for finding nearly-formed stellar systems around galaxies. 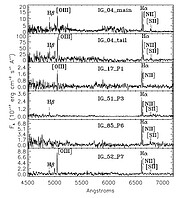 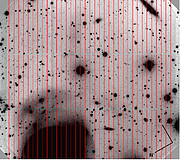