Gemini astronomer Tom Geballe describes his recent infrared spectroscopic observations of a mysterious quintuplet of stars. Each of these stars is embedded in its own cocoon of dust in a cluster of massive stars near the center of the Milky Way. The research, using the Gemini Near Infrared Spectrograph (GNIRS) and Near-infrared Integral Field Spectrometer (NIFS) on the Gemini North telescope, confirms that four of the five stars are evolved massive stars which have expelled their outer hydrogen layers, and are rapidly approaching the explosive ends of their relatively short lives. Until this work astronomers were unable to detect the stars inside the cocoons and thereby directly discern their natures. The existence of this Infrared Quintuplet is yet another illustration of the effects of high densities of massive stars in some clusters and of the extreme conditions at the very heart of our galaxy.

Most objects in the center of the Milky Way are so highly obscured from our view by intervening dust that, at wavelengths visible to the naked eye, only about one photon out of every trillion emitted by them toward the Earth actually reaches our planet. This makes it impossible to observe the copious visible light emitted by the Galactic center’s stars, hot gas, the accretion disk encircling the supermassive black hole, and many other objects. The amount of obscuration decreases rapidly with increasing wavelength and thus most of our information about the Galactic center’s resident objects and gas comes from infrared and radio observations.

For some Galactic center stars, those that are embedded in dust shells of their own making, the obscuration is even more extreme. Among these are five infrared-luminous objects known as the Infrared Quintuplet, located at the center of a cluster of hundreds of hot and massive stars, which has been given the name Quintuplet Cluster. The Quintuplet Cluster is only 30 parsecs (100 light years) distant from the central massive black hole at the very center of our galaxy.

The difficulty in observing these five stars is greater, not only due to the additional obscuration by their dust shells, but also because the shells are warmed by their central stars and emit bright infrared continuum radiation, diluting any infrared light from the stars themselves. The combination of these effects has made it very challenging, if not impossible, at any infrared wavelength to detect light from the interiors of the shells leaking through the dust “cocoons” and surviving the journey through the interstellar dust to our telescopes, or so it was thought. Thus, little has been learned about natures of these objects since they were discovered over a quarter century ago. The only clues were high-resolution infrared images which showed that the dust emission from two of the five resembled pinwheels. Previously this phenomenon had only been seen outside of the Galactic center, in a few objects identified as Wolf-Rayet colliding wind binaries, which are double star systems comprised of extremely luminous hot stars with massive winds.

Several years ago, while using NIFS at Gemini North for an unrelated research program I (Tom Geballe) serendipitously discovered a very faint and broad emission line due to hot helium gas near 1.7 microns in the infrared spectrum of one of the Quintuplet stars. Prompted by this, a team consisting of myself, Paco Najarro (Centro de Astrobiología, Spain), Don Figer (Rochester Institute of Technology), and Diego de la Fuente (Universidad Nacional Autónoma de México) successfully proposed to use NIFS and GNIRS to obtain sensitive spectra of all five members of the infrared Quintuplet, not only near 1.7 microns, but also down to wavelengths as short as 1.0 micron. Near the short end of that wavelength range, one photon in several thousand survives the journey first through the dust cocoon and then from the Galactic center to Earth. That fraction is much larger than the one in a trillion at visible wavelengths, but is still tiny. However, the contaminating emission from the warm dust shells is greatly reduced, increasing the contrast between any spectral features emitted from inside the dust shells and the continuum emission from the shells themselves. Thus, we reasoned that with a large telescope, a sensitive spectrograph, and less dilution from the warm dust, we would be able to detect the faint light coming from within the cocoons.

Our team’s spectra, recently published in The Astrophysical Journal, reveal the presence of emission lines from four of the five members of the Quintuplet, and have allowed us to definitively identify the four as containing late-type, carbon-rich Wolf-Rayet stars, as was suspected based on the earlier imaging. These massive stars are only a few million years old, but have completely lost their outer hydrogen-rich layers and probably do not have much longer to exist before exploding violently as supernovae.

We report the detection of a number of emission lines in the 1.0–2.4 μm spectra of four of the five bright infrared dust-embedded stars at the center of the Galactic center’s Quintuplet Cluster. Spectroscopy of the central stars of these objects is hampered not only by the large interstellar extinction that obscures all objects in the Galactic center, but also by the large amounts of warm circumstellar dust surrounding each of the five. The pinwheel morphologies of the dust observed previously around two of them are indicative of Wolf-Rayet colliding wind binaries; however, infrared spectra of each of the five have until now revealed only dust continua steeply rising to long wavelengths and absorption lines and bands from interstellar gas and dust. The emission lines detected, from ionized carbon and from helium, are broad and confirm that the objects are dusty late-type carbon Wolf-Rayet stars. 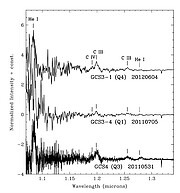