Astronomers using the Gemini Observatory and the Canada-France-Hawaii Telescope have discovered remarkable differences in the abundance of heavier elements, and the Lithium content, in a binary star pair. The research team speculates that this difference is caused by the engulfment of rocky planets early in the system’s evolution which enriched one of the stars. The work also hints at a formation scenario resulting in gas giant planets forming relatively far from their host star.

A team of astronomers led by Carlos Saffe (Instituto de Ciencias Astronómicas, de la Tierra y el Espacio, Argentina) observed the peculiar binary system called HAT-P-4, which includes a confirmed exoplanet orbiting one of the stars in the pair. The team used the 8-meter Gemini North Telescope and the Gemini Remote Access to CFHT ESPaDOnS Spectrograph (GRACES) located at the Canada-France-Hawaii Telescope to perform high-resolution spectroscopy of the two stars. These spectra revealed that the star pair have markedly different quantities of heavy elements or what astronomers call “metallicity.”

“Both stars are believed to have formed together with the same chemical composition, which makes the difference in metallicity found in this binary system remarkable,” according to Saffe. In particular, says Saffe, the different refractory (rocky) content points toward a history of a rocky planet or planets in the system. “We speculate that these observations can be explained by the engulfment of a rocky planet sometime during the system’s evolution. This presents us with an exciting glimpse into the system’s violent planet formation history.”

One star in the pair, HAT-P-4 A, also hosts a gas giant planet orbiting at only 0.04 AU from the star. This same star also displays a higher Lithium abundance than its stellar companion, which is another unexpected feature in this type of binary system. The authors use these data to exclude other possible explanations, such as a peculiar composition of the stars or different rotational velocities. The team concludes that HAT-P-4-A formed the known gas giant planet while rocky (refractory) material accreted closer to the star, possibly due to migration of the gas giant. Saffe concludes, “This scenario explains the higher metallicity of HAT-P-4-A, the higher refractory abundance, and the higher Lithium content.”

To explore the possible chemical signature of planet formation in the binary system HAT-P-4, by studying abundance vs condensation temperature Tc trends. The star HAT-P-4 hosts a planet detected by transits while its stellar companion does not have any detected planet.We also study the Lithium content, which could shed light on the problem of Li depletion in exoplanet host stars.

We derive, for the first time, both stellar parameters and high-precision chemical abundances by applying a line-by-line full differential approach. The stellar parameters were determined by imposing ionization and excitation equilibrium of Fe lines, with an updated version of the FUNDPAR program, together with ATLAS9 model atmospheres and the MOOG code. We derived detailed abundances of different species with equivalent widths and spectral synthesis with the MOOG program.

The exoplanet host star HAT-P-4 is found to be ∼0.1 dex more metal rich than its companion, which is one of the highest differences in metallicity observed in similar systems. This could have important implications for chemical tagging studies, disentangling groups of stars with a common origin. We rule out a possible peculiar composition for each star as λ Boötis, δ Scuti or a Blue Straggler. The star HAT-P-4 is enhanced in refractory elements relative to volatile when compared to its stellar companion. Notably, the Lithium abundance in HAT-P-4 is greater than in its companion by ∼0.3 dex, which is contrary to the model that explains the Lithium depletion by the presence of planets. We propose a scenario where, at the time of planet formation, the star HAT-P-4 locked the inner refractory material in planetesimals and rocky planets, and formed the outer gas giant planet at a greater distance. The refractories were then accreted onto the star, possibly due to the migration of the giant planet. This explains the higher metallicity, the higher Lithium content, and the negative Tc trend detected. A similar scenario was recently proposed for the solar twin star HIP 68468, which is in some aspects similar to HAT-P-4. We estimate a mass of at least Mrock ∼ 10 M⊕ locked in refractory material in order to reproduce the observed Tc trends and metallicity. 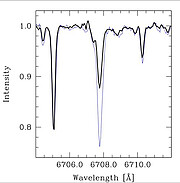