A team of Korean astronomers uses imaging from the Gemini Multi-Object Spectrograph (GMOS) on Gemini North to characterize the rotation of active asteroid P/2010 A2’s largest fragment. The observations show that this faint and tiny (about the size of an American football field) asteroid, which underwent a mass ejection episode, is slowly rotating, indicative of an impact fragmentation rather a rotational breakup.

In January 2017, the active and fragmented main belt asteroid P/2010 A2 (hereafter A2) made its closest approach to the Earth after its 2010 discovery, when it exhibited a mysterious comet-like dust trail. Prior to this year’s passage, the fragments had not yet been characterized, due to the extremely small size (~120 meters in diameter) and faintness of this object. A Korean team, led by Yoonyoung Kim of Seoul National University, received time on Gemini North to observe the object’s 2017 close passage when the fragments and associated debris swarm were just over one astronomical unit away.

According to Kim, a variety of hypotheses have been suggested to explain the history of this body, including rotational breakup, impact cratering, or shattering. The team determined a rotation period ~11.36 hours for the largest fragment. If the fragment’s spin period has been constant after the mass ejection, which Kim says is reasonable to believe, then it fails to meet the critical spin rate for rotational breakup. The observations also reveal that the largest fragment has a highly-elongated shape with about a 2:1 ratio. Looking at the size distributions of the ejecta and other fragments, the team concludes that the body likely underwent impact shattering in order to produce the observed morphology.

The study’s light curve is shown in Figure 1 and presents the largest fragment’s double-peaked period of 11.36 +/- 0.02 hours. Figure 2 presents a composite from the imaging data revealing the array of fragments and debris used to determine the mass of the largest fragment is about 80% of the system’s mass with the other fragments and ejecta making up the remaining 20%. All figures are from the accepted paper scheduled for publication in The Astrophysical Journal Letters.

We report new observations of the active asteroid P/2010 A2 taken when it made its closest approach to the Earth (1.06 au in 2017 January) after its first discovery in 2010. Despite a crucial role of the rotational period in clarifying its ejection mechanism, the rotational property of P/2010 A2 has not yet been studied due to the extreme faintness of this tiny object (∼120 m in diameter). Taking advantage of the best observing geometry since the discovery, we succeed in obtaining the rotational light curve of the largest fragment with Gemini/GMOS-N. We find that (1) the largest fragment has a double-peaked period of 11.36±0.02 hr spinning much slower than its critical spin period; (2) the largest fragment is a highly elongated object (a/b⩾1.94) with an effective radius of 61.9+16.8−9.2 m; (3) the size distribution of the ejecta follows a broken power law (the power indices of the cumulative size distributions of the dust and fragments are 2.5±0.1 and 5.2±0.1, respectively); (4) the mass ratio of the largest fragment to the total ejecta is around 0.8; and (5) the dust cloud morphology is in agreement with the anisotropic ejection model in Kim et al. These new characteristics of the ejecta obtained in this work are favorable to the impact shattering hypothesis. 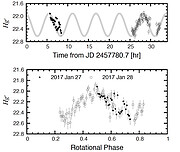