Using spectroscopic data from the Gemini North telescope, researchers have probed a complex binary T Tauri system that hints at a hidden planetary body shrouded deep within a stellar environment at the late stages of formation.

The team obtained data at three different orientations of the system’s two young stars, allowing them to study several key aspects of this complicated system — including characterising the photosphere and magnetosphere of the companion star (B), exploring a jet of material associated with a bipolar outflow, and probing the scattering properties of its circumbinary ring. The research uncovered an excess of near-infrared radiation that is possibly the signature of a self-luminous 10-Jupiter-mass planet. While this unresolved planet displays the expected excess in infrared radiation, as well as a 2-micron spectral feature that may be due to methane or ammonia, other anticipated signs of these two compounds went undetected in the observations. The team’s spectroscopic observations also indicate that a mixture of water and methane ice grains lie within the circumbinary ring — close enough to the primary stars that the frozen methane must be shielded by dust from direct radiation.

Finally, in addition to determining that star B is an early-K type subgiant, the research revealed variable helium I emission in star B’s magnetosphere due to ongoing mass accretion. The team’s paper is accepted for publication in The Astrophysical Journal.

We report on Gemini/GNIRS observations of the binary T Tauri system V582 Mon (KH 15D) at three orbital phases. These spectra allow us to untangle five components of the system: the photosphere and magnetosphere of star B, the jet, scattering properties of the ring material, and excess near-IR radiation previously attributed to a possible self-luminous planet. We confirm an early-K subgiant classification for star B and show that the magnetospheric He I emission line is variable, possibly indicating increased mass accretion at certain times. As expected, the H2 emission features associated with the inner part of the jet show no variation with orbital phase. We show that the reflectance spectrum for the scattered light has a distinctive blue slope and spectral features consistent with scattering and absorption by a mixture of water and methane ice grains in the 1-50 μm size range. This suggests that the methane frost line is closer than ∼5 AU in this system, requiring that the grains be shielded from direct radiation. After correcting for features from the scattered light, jet, magnetosphere, and photosphere, we confirm the presence of leftover near-IR light from an additional source, detectable near minimum brightness. A spectral emission feature matching the model spectrum of a 10 MJ , 1 Myr old planet is found in the excess flux, but other expected features from this model are not seen. Our observations, therefore, tentatively support the picture that a luminous planet is present within the system, although they cannot yet be considered definitive. 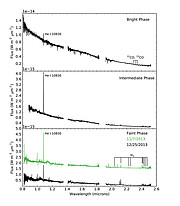