Summary: A team using the Gemini Multi-Conjugate Adaptive Optics System (GeMS) with the Gemini South Adaptive Optics Imager (GSAOI) have, for the first time, measured the stellar masses relative to the physical sizes of several galaxies in a cluster at a lookback time of about 5 billion years. The data suggest that the relationship between stellar mass and size has a constant slope over time. This leads to the conclusion that the most likely evolutionary course for the larger (more expansive) galaxies we see in the nearby Universe is either from the combination of smaller galaxies and/or outflows from black holes at galactic cores.

During the past 20 years astronomers have developed a picture for the evolution of the size and structure of galaxies – from the formation of the first galaxies in the early Universe, to what we see today. One of the most important discoveries is that the most massive galaxies in the early Universe, at z > 1 (i.e. when the universe was about 5 billion years old), were much smaller in physical size (for their stellar mass, by a factor of between 2 to 6) when compared to galaxies we see in the local Universe today.

It is still unclear what the main physical mechanism(s) is/are that allow this extraordinary growth in the size of these galaxies over time. Mergers of galaxies with similar stellar masses (major mergers), accretion of small satellite galaxies (minor mergers), or the rapid loss of mass caused by active galactic nuclei (AGN), or supernova winds (adiabatic expansion) could all potentially be responsible for the dramatic growth in the size of these galaxies. To distinguish between these proposed physical mechanisms, astronomers use the stellar mass – size relation (i.e. the relation between the mass of the galaxies measured from light of the stars and the intrinsic size of the galaxies represented by their effective radii).

The accuracy in determining the stellar mass - size relation for a galaxy depends most strongly on the resolution of the images and the rest-frame wavelength (assuming no redshift due to the expansion of the Universe) of the observations. The resolution is required to measure accurately the sizes of the most compact galaxies.

Using the most advanced adaptive optic system on the planet, the Gemini Multi-Conjugate Adaptive Optics System (GeMS), and the Gemini South Adaptive Optics Imager (GSAOI), an international team of astronomers, led by Sarah Sweet from the Australian National University in Canberra, Australia, have measured, for the first time, the stellar mass – size relation for several galaxies in a cluster environment (SPT-CL J0546−5345 at a redshift of z = 1.067), with an average resolution of 450 parsecs in radius at the cluster redshift, and at the rest-frame wavelength dominated by an old (redder) stellar population. The authors of this study find that the stellar mass - size relation at the redshift of the cluster (z ~ 1) is offset from that at z ~ 0. The result is consistent with previous findings, where the primary mechanism for galaxy growth in size is minor mergers.

One of the most important results presented in this study is that the slope of the stellar mass – size relation plot of the massive galaxies at z ~ 1 is consistent with the slope seen for the galaxies with same stellar masses in the local Universe. This result suggests that the massive galaxies in the cluster SPT-CL J0546-5345 has ceased its early, rapid growth via major mergers, leaving the accretion of small satellite galaxies (minor mergers) and/or the rapid loss of mass caused by active galactic nuclei (AGN), as the principal mechanism to increase the size of the galaxies. 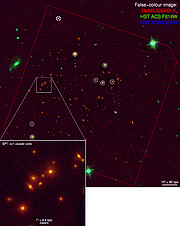