Jupiter’s moon Io is the most volcanically active world in our Solar System. Now, the longest series of frequent high-resolution tracking of Io’s thermal emission is providing insights on Io’s volcanoes thanks to a powerful joint observation program between the Gemini North telescope (with NIRI+Altair instrument) and the W.M. Keck Observatory.

The observations use advanced adaptive optics technology to remove distortions caused by the Earth’s atmosphere and provide remarkably sharp imaging of Io’s volcanic activity over a period of 29 months. The results show patterns in the volcanic activity over time and location on the satellite, but also present many new questions.

Compellingly, some of the eruptions appeared to progress across the surface over time, as if one somehow triggered another 500 kilometers away. According to University of California Berkeley (UCB) Graduate Student Katherine de Kleer, "While it stretches the imagination to devise a mechanism that could operate over distances of 500 kilometers, Io’s volcanism is far more extreme than anything we have on Earth and continues to amaze and baffle us.” De Kleer led the analysis of the data for this study.

“These remarkable images illustrate the great strides that have been made in high-resolution imaging from the ground over the past decade,” notes Chris Davis, Program Director for the Gemini Observatory at the National Science Foundation, which contributes the bulk of the operations costs of the observatory. “It is amazing to think that, with adaptive optics on 8-10 meter class telescopes like Gemini and Keck, we are now able to resolve features on the surfaces of not just neighboring planets, but their moons as well!”

The results were presented at the American Astronomical Society’s Division of Planetary Sciences and the European Planetary Sciences Congress in Pasadena, California on Thursday, October 20, 2016. De Kleer, and her advisor at UCB, Imke de Pater, presented the results jointly based on a pair of papers accepted for publication in the journal Icarus. 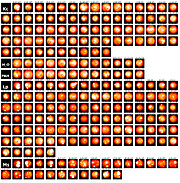