Mysterious “Blobs” Can be Closer Than We Thought

Astronomers studying a mysterious phenomenon known as Lyman-alpha blobs (LABs) have discovered several of these high-energy objects in galaxies that are much closer than previously known. The discovery is significant because these closer specimens are much easier to study, and because they live at a time when the Universe was much older and more mature, allowing astronomers to study their evolution with cosmic time.

The observations are of a rare type of relatively nearby galaxy, engulfed in large clouds of ionized gas as a result of violent, energetic activity in their cores. These closer specimens were first described in 2013, catching the astronomers’ attention with their luminosities and sizes. Data taken with the Gemini Observatory quickly revealed that these galaxies are unparalleled by any other objects known in the nearby Universe. To understand their nature and formation, observations with the Chandra X-ray observatory, the GALEX UV satellite, and the mid-infrared WISE satellite were included to augment the Gemini data.

“Looking at the far ultraviolet images taken with GALEX, we realized that these huge ionized clouds of gas are similar to the Lyman-alpha blobs, or LABs,” says Mischa Schirmer of the Gemini Observatory. “So far, LABs were only known in the young Universe, at a time when galaxies were forming much more vigorously than today. It’s an exciting discovery that LABs may still exist 4-7 billion years later in the Universe, albeit in much lower numbers.” Schirmer adds that the existence of these objects has been postulated, but due to their scarcity they were difficult to find.

LABs have puzzled astronomers since they were first discovered in 1999. They emit copious amounts of energetic far-ultraviolet radiation, yet their power sources often remained unknown. Hai Fu of the University of Iowa, and a co-author of the study, says that various explanations exist, “yet, taken together, they could still not explain all the data at hand.” The main problems are the LABs’ great distances, making them very dim. “Furthermore, their high redshifts make it difficult to access these parts of the spectrum from which we gain most information about their physical state”, adds Fu. “Having identified LABs at our cosmic doorstep makes our analysis so much easier.”

One of the team’s surprising results is that the active galactic nuclei (AGN) in their sample are weak. AGN are supermassive black holes at the centers of galaxies, actively accreting material from their immediate surroundings. This process can release enormous amounts of energy and radiation, making AGN amongst the most luminous objects in the Universe. “Given the luminosity of the ionized gas in the LABs in our study, we expected the most powerful AGN in their centers. However, when we directly measured the energy output of the AGN with the Chandra X-ray telescope, we found the AGN 10 to 1000 times less powerful than required,” says Nancy Levenson of the Gemini Observatory. This means that the AGN must have rapidly faded within the last few 1000-10000 years. The ionizing radiation from their previous high state is still propagating through the galaxy, powering the gaseous nebula. Several such “ionization echoes” have been found by the Galaxy Zoo project in nearby galaxies, albeit none of them as powerful as in the objects of this study.

“The most exciting result about our research is that the fading AGN naturally explain the absence of powerful sources in many LABs,” says Sangeeta Malhotra from Arizona State University. “The ultraviolet Lyman-alpha photons cannot leave the cloud of gas in a straight line like most other photons. Performing a random walk in the gas, the LAB can easily trap them for hundreds of thousands of years.” By the time the photons manage to escape, the central AGN may have long faded from the astronomers’ view, causing the apparent energy deficits.

“It’s amazing that we could finally identify this missing piece of the puzzle,” says Schirmer. “However, there is still a tremendous amount of work to be done, now that we can embark on the details and the bigger picture with further observations.”

The research included imaging and spectroscopic observations taken with the Gemini Multi-Object Spectrographs (GMOS) at both of the Gemini telescopes. Nearby LABs are extremely rare, with only about one found for every 1000 square degrees of sky. Once identified, the Gemini observations were straightforward because these LABs are very bright despite their light travel time distance of three billion light years. For comparison, the high redshift LABs that have been known so far, are typically 100 times dimmer and 2-3 times smaller. To unlock the LABs mysteries, the astronomers had to include further observations in X-ray, UV and infrared wavelengths, using the Chandra, GALEX and WISE satellites, respectively. The core team includes Mischa Schirmer (Gemini Observatory), Sangeeta Malhotra (Arizona State University), Nancy Levenson (Gemini Observatory), Hai Fu (University of Iowa), Rebecca Davies (Max-Planck Institute for Extraterrestial Physics), William Keel (University of Alabama), Paul Torrey (Harvard-Smithsonian Center for Astrophysics), and James Turner (Gemini Observatory). 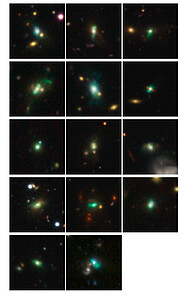