TW Hydrae (TW Hya) is one of the best-studied young stars in the galaxy.At just 180 light years from Earth and a ripe young age of roughly 8 million years, this nearly solar-mass star and its orbiting, circumstellar disk of dust and gas are prime targets to better understand the processes involved in star and planet formation. The most sensitive telescope systems available, accessing wavelengths from radio to X-ray, have observed the TW Hya system. Astronomers have now used the Gemini Planet Imager (GPI) on Gemini South to image infrared light from TW Hya that is scattered off dust grains in its surrounding disk. The new GPI images confirm the presence of a darkened ring or gap in the disk at 23 AU (i.e., 23 times the earth-Sun distance) -- and GPI brings this gap into the sharpest focus yet. Comparison with detailed numerical simulations of planets forming in circumstellar disks indicates that the 5-AU-wide gap's observed structure could be generated by a sub-Jupiter-mass planet orbiting within the disk at a position roughly equivalent to that of Uranus in our solar system. "These GPI data reveal tell-tale disk structure in the giant-planet-forming region around TW Hya at higher resolution than any other measurements to date," says Dr. Valerie Rapson of Rochester Institute of Technology, who led the research team. “The results will help us piece together the story of how giant planets form around sun-like stars.”

We present Gemini Planet Imager (GPI) adaptive optics near-infrared images of the giant-planet-forming regions of the protoplanetary disk orbiting the nearby (D = 54 pc), pre-main-sequence (classical T Tauri) star TW Hydrae. The GPI images, which were obtained in coronagraphic/polarimetric mode, exploit starlight scattered off small dust grains to elucidate the surface density structure of the TW Hya disk from ~80 AU to within ~10 AU of the star at ~1.5 AU resolution. The GPI polarized intensity images unambiguously confirm the presence of a gap in the radial surface brightness distribution of the inner disk. The gap is centered near ~23 AU, with a width of ~5 AU and a depth of ~50%. In the context of recent simulations of giant-planet formation in gaseous, dusty disks orbiting pre-main-sequence stars, these results indicate that at least one young planet with a mass ~0.2 MJ could be present in the TW Hya disk at an orbital semimajor axis similar to that of Uranus. If this (proto)planet is actively accreting gas from the disk, it may be readily detectable by GPI or a similarly sensitive, high-resolution infrared imaging system. 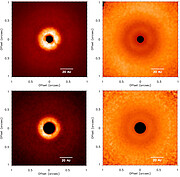