Mysterious Starburst Unshrouded in Nearby Galaxy

The nearest spiral galaxy with a nuclear starburst (greatly enhanced star formation near a galaxy’s center) is also the site of a long-standing astronomical mystery. Designated NGC 253, or by amateurs as the Silver Dollar Galaxy, the core of this galaxy is so shrouded by gas and dust that the exact location of its core has remained unresolved for years. Now, thanks to research by Guillermo Günthardt of the National University of Cordoba (Argentina), Gemini South infrared data appear to have unambiguously pinpointed the galaxy’s core. In the process, evidence for a lowish-mass, but rapidly growing, black hole as the starburst’s trigger is painting a new picture of this enigmatic galaxy (Figure 1).

NGC 253 is the nearest spiral galaxy with a nuclear starburst. The nuclear region is so veiled by large amounts of dust associated to the star formation process that it has been unclear, until now, where this galaxy’s true galactic nucleus lies. Guillermo Günthardt, from the National University of Cordoba (Argentina), and an international team suggest that the brightest near- and mid-infrared source in the central region, named the IRC (Infrared Core) by the authors, is the galaxy’s core. Long considered just a large young star cluster, Günthardt et al. present several features leading to the conclusion this source is the genuine galactic nucleus. This contradicts the previous idea that a source called TH2 (a bright fuzzy radio source catalogued by Turner and Ho in 1985) is the best candidate for the nucleus.

In the team’s paper, to appear in the next issue of The Astronomical Journal the team presents kinematic, spectrophotometric, and morphological evidence that support the hypothesis that the IRC is NGC 253's galactic nucleus. This includes the fact that the IRC is the most massive object in NGC 253's central region, the major source of the nuclear starburst outflow, the molecular gas rotation center, and it is almost coincident with the galactic bar symmetry center.

Günthardt’s team obtained near-infrared observations with Flamingos 2 (F2) on the Gemini South telescope, including spectroscopy and images in four bands. In order to penetrate the veil of dust deeper, F2 observations were complemented by mid-infrared images obtained at Gemini South with T-ReCS (Thermal-Region Camera Spectrograph) in 2011, again, using four filters. At near- and mid-infrared wavelengths the IRC, TH7 in the radio source catalogue, appears an order of magnitude brighter than any other objects in the central region of NGC 253, moreover, there is no infrared source detected at the previous candidate position (TH2). The T-ReCS high-spatial-resolution images show a shell-like structure around the IRC, and F2 spectra show the largest turbulence motions in the ionized gas at this location, with expanding velocities over 500 km per second. This observation reveals that the IRC is also the main present source of the galaxy-wide gaseous winds detected in 2013 with ALMA by Bolatto et al.

The innermost radial velocity measures of the molecular gas do not exclude the possible presence of a few million solar masses black hole at the center of the IRC. Considering that NGC 253 is a large spiral galaxy with a mass of more than 7 x 1011 times the mass of our Sun, the IRC is an unexpectedly lightweight core, but which might be growing rapidly as it co-evolves with the violent star-formation process taking place in the galaxy’s nuclear region.

The off-center position of the IRC and of the nuclear disk, with respect to the galaxy’s bulge of stars, also contributed to the historic uncertainty in the nucleus location and implies a decoupling of the central gas and nuclear cluster from the older galactic structure. In 2015 Emsellem et al. theorized just such a decoupling using numerical simulation models in which a small nuclear core oscillates around the center of symmetry of a barred galaxy. In such a scenario, the small black hole in NGC 253 would not only grow rapidly while it accretes the dense nuclear gas, but also would efficiently trigger star formation due to its dance around the galaxy’s geometrical center.

NGC253 is the nearest spiral galaxy with a nuclear starburst, which becomes the best candidate to study the relationship between starburst and AGN activity. However, this central region is veiled by large amounts of dust, and it has been so far unclear which is the true dynamical nucleus. The near infrared spectroscopy could be advantageous in order to shed light on the true nucleus identity. Using Flamingos 2 at Gemini South we have taken deep K-band spectra along the major axis and through the brightest infrared source. We present evidence showing that the brightest near infrared and mid infrared source in the central region, already known as radio source TH7 and so far considered just a stellar supercluster, in fact, presents various symptoms of a genuine galactic nucleus. Therefore, it should be considered a valid nucleus candidate. It is the most massive compact infrared object in the central region, located at 2.0 arcseconds of the symmetry center of the galactic bar. Moreover, our data indicate that this object is surrounded by a large circumnuclear stellar disk and it is also located at the rotation center of the large molecular gas disk of NGC 253. Furthermore, a kinematic residual appears in the H2 rotation curve with a sinusoidal shape consistent with an outflow centered in the candidate nucleus position. The maximum outflow velocity is located about 14 parsecs from TH7, which is consistent with the radius of a shell detected around the nucleus candidate observed at 18.3 μm (Qa) and 12.8 μm ([NeII]) with T-ReCS. Also, the Brγ emission line profile is blue-shifted and this emission line has also the highest equivalent width at this position. All these evidences point out TH7 as the best candidate to be the galactic nucleus of NGC 253. 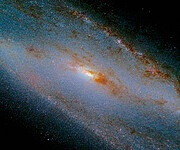